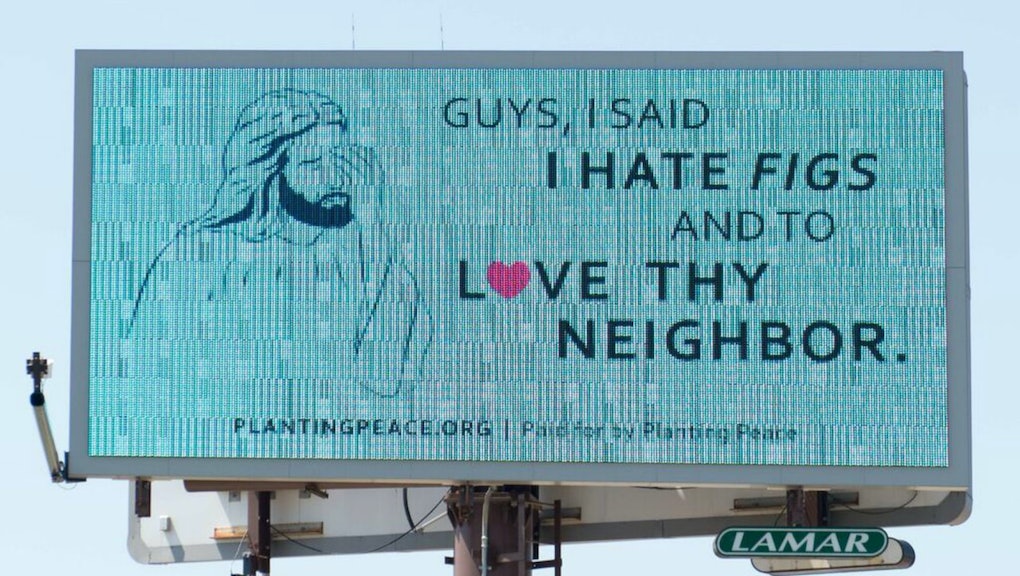 Sometimes, when a bill passes that paves the way for statewide discrimination — which happened on Tuesday when Mississippi Gov. Phil Bryant signed the "Protecting Freedom of Conscience from Government Discrimination Act" into law — there are only three words you can say: "Fix it, Jesus."

And that's exactly what one group is hoping to do. After the passage of the bill, which will allow businesses and religious organizations to discriminate on the basis of sexuality, nonprofit organization Planting Peace purchased space on a giant electronic billboard.

The message is simple and humorous: "Guys, I said I hate figs and love thy neighbor." The billboard, of course, makes reference to the "golden rule" — treat others as you wish to be treated.

Read more: "Confederate Heritage" Month Is the Mississippi Holiday No One Asked For

Basically, Planting Peace just countered a bill that discriminates in the name of religious freedom with one of Christianity's most fundamental principles.

"The intent of this billboard is to bring awareness to how the anti-LGBT movement continues to try to move us backwards in the fight for equal rights," Aaron Jackson, president of Planting Peace, said in an email to the Huffington Post.

Jackson also pointed out that bills like the one signed by Bryant reinforce messages that make LGBTQ youth feel broken, less than or unworthy, which can lead to a host of negative consequences, including suicide.

"We will keep sharing this message as long as we need to, to counter hateful actions designed to infringe on people's basic human rights and dignity," he said.

Planting Peace's billboard game has always been on point. In September, when Kentucky county clerk Kim Davis was to return to work after objecting to signing marriage licenses to same-sex couples, Planting Peace bought billboard space in her hometown with a message about redefining marriage.

They also own a rainbow house, known as the Equality House, directly across from the headquarters of known hate group Westboro Baptist Church. They performed a gay wedding between Gandalf and Dumbledore in front of the Equality House in June.

In a blog post on Planting Peace's website, the organization pointed to Matthew chapter 21, where Jesus curses a fig tree.

"But we don't see a lot of 'God Hates Figs' protests or cries for stronger legislation regulating figs," the blog stated.

In the end, all humor aside, their message is simple and clear: "You are loved, valued, supported and beautiful. There is nothing wrong with you, and we will stand by you. You are not alone."