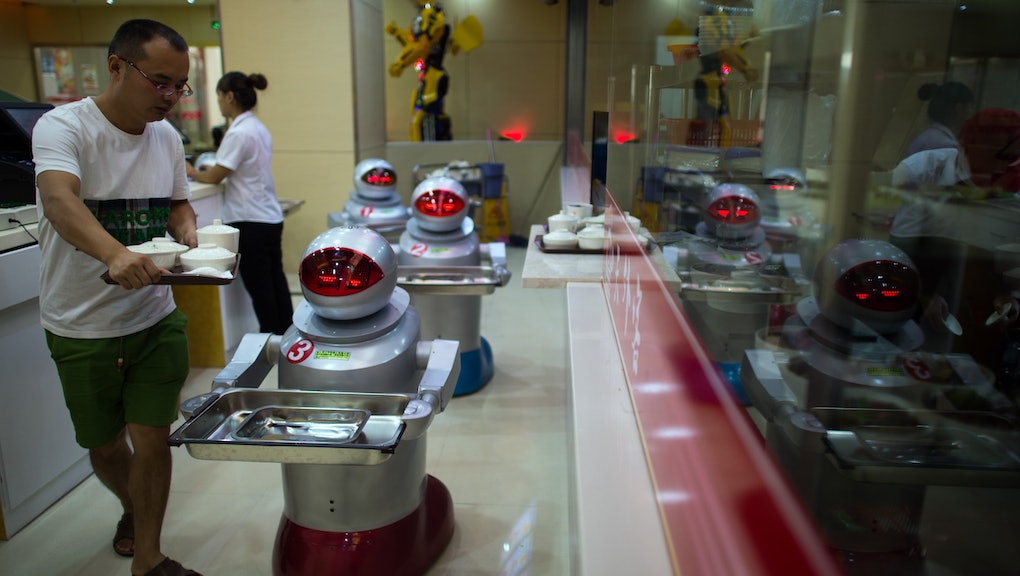 Robots with artificial intelligence — they're just like us! They get canned if they suck at their job.

That's what's happening in restaurants in China, whose owners have fired about 10 robots because they weren't able to properly execute their duties, South China Morning Post reported, citing Xiamen Daily.

The push for robots in restaurants aimed to cut costs and lure in tourists. "In a year, the money saved from hiring cooks will be enough to buy two more robots," a Xiamen restaurant owner said in January 2013, according to China Daily.

Fast-forward to 2016: Many of these fancy new hires across China have proven more artificial than intelligent.

"The robots were virtually not intelligent at all," an employee at Chopsticks Passion reportedly said, according to the South China Morning Post. "They were merely standing there to look fancy."

Since standing around to look fancy is reserved for trophy beaus and not chefs and waiters, this automated workforce is getting sacked.

Reasons for pink slips include "unpalatable" dishes due to "poor cooking skills," and a lack of creative thinking, according to the South China Morning Post. No shit.

"Human beings can react to their environment effectively, but these robots are not able to do so," Sun Qimin, chairman of robot-maker Siert, reportedly said, according to the South China Morning Post.

The Dalu Robot Restaurant in China had to set the tables in a circular pattern so that its robot staff could follow an exact route, What's on Xiamen reported in 2010. At Robot Restaurant, the website reported in 2014, diners were greeted with, "Earth person, hello. Welcome to the Robot Restaurant." While all of this is adorable from a diner's perspective, it marks a lack of improvisation and adaptability — two important traits if you're navigating a busy restaurant.

Rest easy, humans. If an artificially intelligent robot can't hold a waitstaff job, it's probably far off from wiping us out.