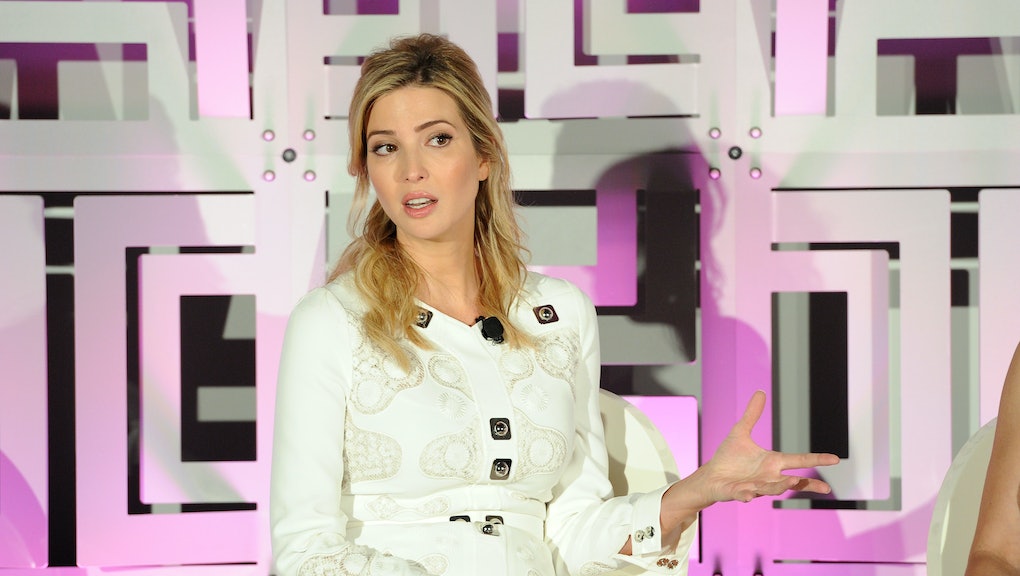 Ivanka Trump, Donald Trump's 34-year-old daughter who's trying her hardest to build a venerable fashion empire, is having a very hard time. In March, she was accused of stealing a shoe design. Now, her scarves are catching fire.

On Wednesday, news broke that two scarves from the Ivanka Trump collection, which had been manufactured in China (we'll get to that later), were recalled for being extremely flammable.

According to the Consumer Product Safety Commission, these two particular styles do not meet the federal flammability standards for textiles, meaning they can absolutely catch on fire if near an open flame. There haven't been any incidents yet, according to the commission. But all 20,000 units sold and still in stock must be recalled. Currently, the scarves are sold at Century 21, Lord & Taylor, Marshalls, TJ Maxx and Stein Mart, meaning basically everywhere your mother has ever shopped.

"We're disappointed to learn of the need for Global Brands Group, our license partner, to recall two styles of Ivanka Trump scarves, but we are relieved that immediate action is being taken," an Ivanka Trump collection spokesperson said in a statement, according to the Washington Post. "We're committed to providing our audience of millennial working women with accessibly priced, quality products that suit their needs and look great. We're seeing to it that this issue is fixed immediately."

If you follow either the Trump family's politics or fashion, you know that this is just yet another instance of terrible irony.

Donald Trump, the Republican presidential frontrunner who is vehemently opposed to moving jobs overseas and has slammed companies like Ford and Apple for doing so, was outed as having profited from cheap, foreign labor himself earlier this year. In a Washington Post report, Trump started manufacturing his line in countries like China, Bangladesh and Honduras all the way back in 2004, profiting from the countries' low wages.

According to the Washington Post, a number of items from Ivanka Trump's collection had been posted on the Trump organization's website, but were removed amid criticism of family outsourcing. Prior to this incident, Ivanka, whose participation in her father's campaign is still ambiguous, had reportedly urged her father to tone down his anti-immigration rhetoric, fearing that it would hurt her business ventures and budding empire.

We can't imagine this will help things either. As per the CPSC, customers who have bought these scarves are being urged to immediately stop wearing them, return them and ask for a full refund.