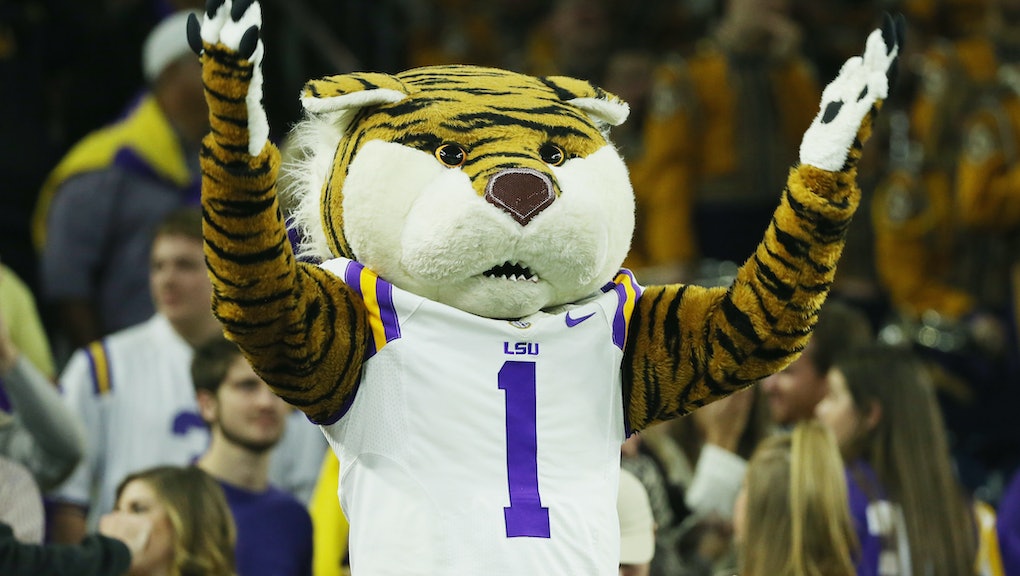 According to the Rape, Abuse and Incest National Network, 68% of sexual assaults are not reported to the police. While one might wonder why that number is so high, a recent controversy at Louisiana State University sheds light on why some people might be reluctant to report rape: because apparently, the police care more about football than their own safety.

According to a report from LSU's student newspaper, the Daily Reveille, all but one of the incidents of sexual assault reported to the LSUPD since 2010 took place on a game day, with most incidents occurring when the Tigers played at home. Of the dozen rapes the school's police department has logged in the past six years, seven reportedly occurred on the same weekends as LSU football games, and four were reported during basketball and baseball games.

While this would seem to be a pretty solid indication that there's a link between LSU games and sexual assault, LSUPD spokesman Lt. Kevin Scott appears to be skeptical of how many rapes happen at the university in the first place. In a statement to the Reville, Scott attributed game day assaults to binge drinking and people being "more active" and "energetic." Scott also told the Reveille he's not so sure about statistics that 1 in 5 college students are sexually assaulted.

"If you surveyed 100 girls, or 1,000 female students on LSU's campus, will you really see one in five that say they've been sexually assaulted, if they're really being honest?" Scott said. "Is that accurate? I mean, look at the numbers."

The trend at LSU aligns with recent research out of Texas A&M University, which found a troubling correlation between college game days and the incidence of sexual assault. A study by researcher Jason Lindo found reports of rape among 17- to 24-year-olds increased 41% on the dates of at-home football games overall, and went up 28% at Division I schools like LSU.

Indeed, the Lighthouse Program, a university program offering services to survivors of sexual violence, told the Reveille it's seen similar increases in sexual assault reporting after home games, which it also attributes to higher rates of alcohol consumption and binge drinking. (It's also worth noting that LSU in particular appears to have an issue dealing with campus sexual assault: the school is currently under investigation for its alleged history of mishandling sexual assault investigations.)

Given the statistic that one in five women will experience a sexual assault on campus (some studies have even put that number as high as one in four), it's extraordinarily unlikely (read: damn near impossible) there have been only 12 instances of sexual assault at LSU in half as many years. (And 12 is still way too many!) Sexual violence is also notoriously underreported; in fact, a recent study from the University of Texas out this week found 91% of sexual assaults in the state are never reported to police.

In the case of LSU specifically, however, it's pretty clear why survivors might opt not to involve campus police: The department employs people like Lt. Scott, who are openly dismissive of campus sexual assault rates (he told the Reveille there was no reason to consider the rate of sexual assaults during home games "shocking data") and, worse, openly skeptical of how many rapes happen at the university in the first place.

It's no wonder that survivors consistently say they felt too stigmatized or afraid of being disbelieved to come forward about their assaults. Much like the police departments at other schools, the LSU police force seems to care more about school spirit on game day than the safety of the students watching the game.