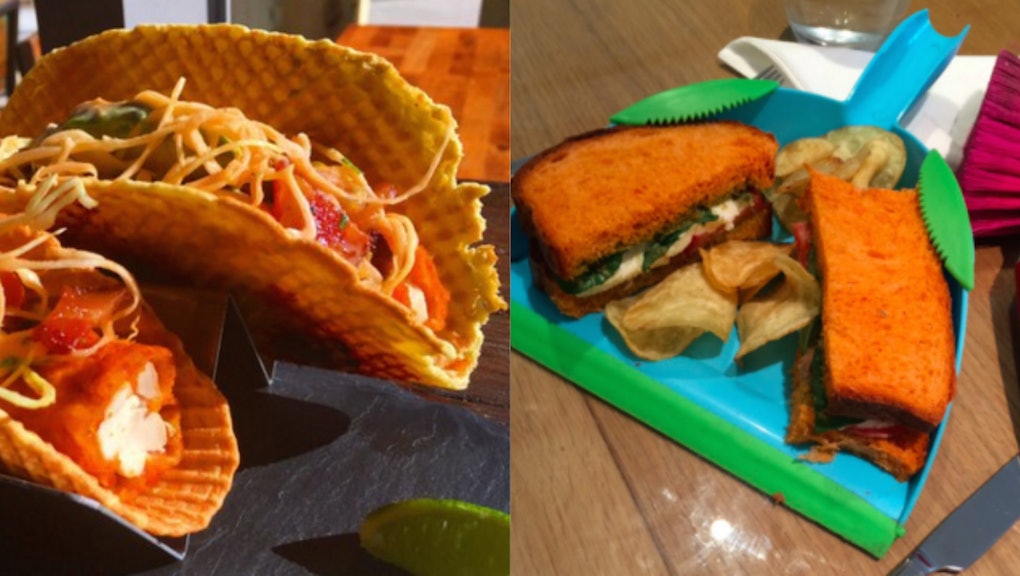 Brunch is widely known to be one of the greatest cures to any hangover, but there is a new phenomenon plaguing the art of the meal: pretentiousness. Restaurants are straying from the typical bacon, egg and cheese sandwiches and chicken and waffles, instead focusing on bizarre international fusions and questionable aesthetics.

Whereas a traditional brunch is served on a plate, with utensils, some restaurants are offering their menu options on steel cafeteria trays similar to a prison's dining experience. In other modern restaurants, cooks like Chef Roble are combining blueberry waffles, fried chicken, bacon and tacos into one seamless dish, topped with avocados — because why not?

Okay, we'd admittedly eat that last one. But when are we going to return to the days of good ol' brunch, when ordering a meal wasn't like speaking an unknown language on another planet? Seriously, can we get #MakeBrunchGreatAgain trending?

Want to talk about pretentious? This brunch is literally served in a stiletto:

Here's that blueberry, bacon, taco, and fried chicken combo we were talking about earlier:

"I'd like my meal served in a mason jar, atop a porcelain-white plate. By the way, what part of Williamsburg are we in? I need to geotag this on Instagram."

If the inside of a scallop is replaced with cooked beans, is that considered fusion?

Remind me to dine and dash if my coffee order is ever served in a vile like this:

Is it considered surf and turf if you're eating shrimp out of a bird's nest?

Tapas, also known as small-plates dishes, are fun to share with friends and family over the course of a brunch. But serving them in a tea cup sort of takes away from the experience, to say the least.

Eva is right: This next one is just downright dangerous and unappetizing.

Breakfast served with a side of patriotism ... in a sink. Because, America?