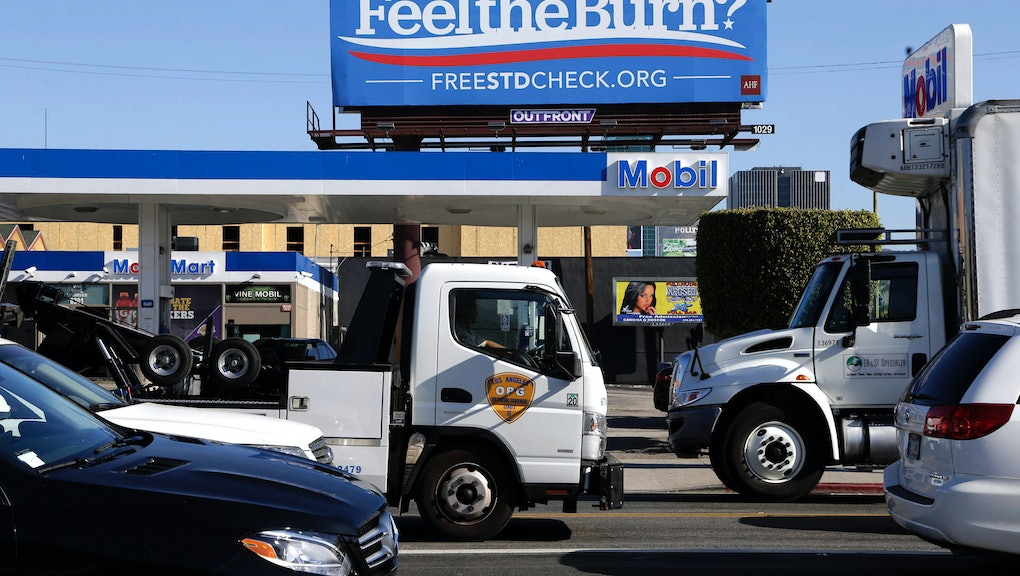 Got a suspicious itch in the Netherlands? Feelin' the burn during bathroom breaks this presidential season? You go to everyone's favorite, unqualified physician: Dr. Google.

And thanks to Google Trends — a creepy, yet sometimes useful catalogue of all our searches — we can see which states are most actively Google-searching specific sexually transmitted infections. According to the Centers for Disease Control and Prevention, some of the most common infections are chlamydia and certain strains of herpes and HPV. Gonorrhea is also a "very common infection, especially among young people," according to the CDC.

The following maps give an idea of how concerned residents of each state are, or at least what the concentration of searches for particular STIs is compared to other states.

Based on these Google Trends maps, some overarching patterns emerge. For example, Mississippi, Louisiana and Georgia were the top three states when it came to searching for chlamydia, herpes and gonorrhea. They were in the top seven for HPV searches.

These search concentrations correlate, in part, with poverty levels: Louisiana and Mississippi have some of the highest poverty rates in the country, and Georgia is among the 10 poorest states. Some research demonstrates a link between poverty and young people using contraceptives less, and other studies have revealed poverty correlates with a deficit in youths' sexual health knowledge.

Chlamydia is a sneaky one, as it can present no symptoms — meaning, without testing, people can be transmitting it unknowingly. Left untreated, it can irreparably damage the female reproductive system, according to the CDC. It is a bacterial infection and, in fact, the most common bacterial STI in the country, according to Planned Parenthood. Around 3 million people contract it each year, and it is especially prevalent for people under 25 years old.

The concentration of searches for chlamydia almost perfectly correlates with how common it is in each state. Mississippi has one of the highest rates of the infection, according to 2012 Cancer.gov statistics, and searched for it the most.

Given poverty's implications on education and health care, the lack of knowledge about and ubiquity of such diseases is perhaps not surprising.

An estimated 1 in 6 Americans has genital herpes, according to Planned Parenthood, and, sadly, there is no cure. Much like chlamydia, those carrying the disease don't necessarily show symptoms and might therefore not know they have it. The disease is more of a nuisance or discomfort than it is a serious health risk, the organization said. As is the case with avoiding all STIs, the safest bet is safe sex.

The three Southern bells — Georgia, Mississippi and Louisiana — all top the chart again, with tied New York and Florida following close behind.

Human papillomavirus is the most common of all STIs. Practically every single sexually active person will contract HPV at some point, the CDC estimated. Different strains of the virus can pose different health risks — from genital warts to cervical cancer. However, it can also be perfectly innocuous; many people might never know they have it and still lead normal, healthy lives.

HPV search patterns break the mold here, putting New York at the top of the list and (though it's not technically a state) Washington, D.C., right... behind it.

Gonorrhea — aka "the clap" — is a bacterial STI, which is easily treated with a course of antibiotics. Aside from genitalia, it can infect the anus, cervix and even throat, according to Planned Parenthood. Symptoms can include pain in the abdomen or during urination, for example. But, much like other members of the STI family, it doesn't necessarily come with symptoms. Eighty percent of women show no signs of the infection at all, according to Planned Parenthood.

As is the case with chlamydia, Mississippi has both the highest search concentration and incidence of the infection, according to 2012 Cancer.gov statistics. And it's, perhaps ironically, very popular along the Bible Belt. (Whoever said abstinence wasn't a sound method of safe sex?)

Now that you have the 411 on STI searches and prevalence, you can decide if it's worth crossing the state border when you're next on the prowl.

This article was originally published on April 8, 2016