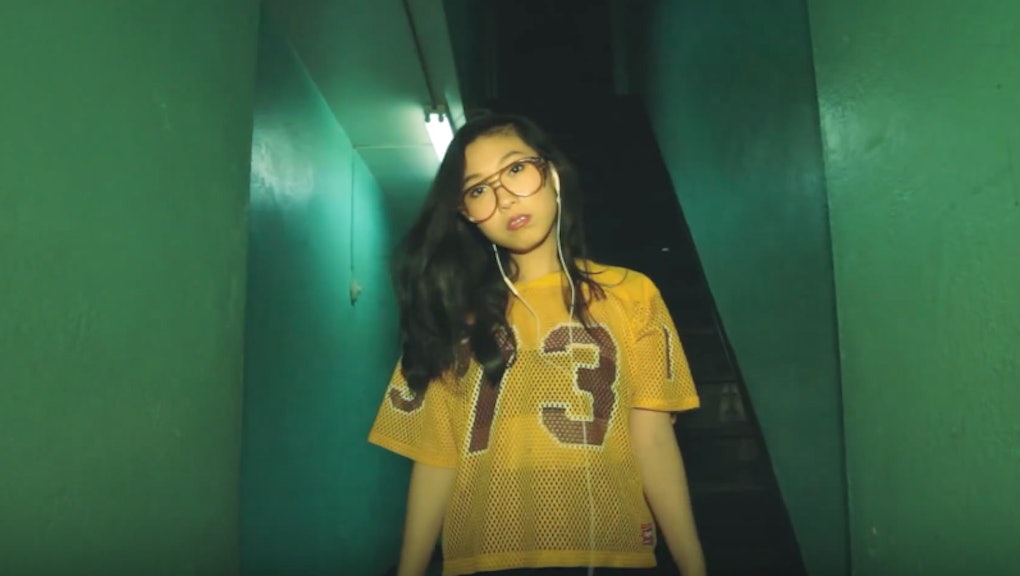 Awkwafina Isn't "Intimidated by the Misogyny in Hip-Hop"

Sitting comfortably on a striped couch in her quiet Greenpoint, Brooklyn, apartment in New York City, 27-year-old Nora Lum wears a gold ring that spells "Pho" and a T-shirt that parodies those "Thank you" takeout bags. She looks like almost any other irony-keen 20-something living in the area.

But onstage Lum transforms into the thick-glasses-wearing Awkwafina, a Queens- and internet-born rapper who isn't shy about delivering songs about her "better than a penis" vagina, how she's sorry to her mama because she smokes marijuana and how "bitches be in Bushwick; they all live in Bushwick."

Against her intentions, her viral hits have been regarded as either parodies or feminist cultural commentary. Having grown up in the same borough as Nas, Lum's MO is to be taken seriously.

She said she took the "risk" of pursuing hip-hop, an industry not typically reserved for females and even less so for usually fetishized Asian females. Yet she genuinely identifies with the music, she told me. Lum writes every lyric and produces her every beat — at first to save money, now to maintain control. She refuses to be sexualized, stereotyped or simplified by the title of "activist."

From this platform, she's poised to pivot the world of hip-hop in some radical new directions.

Mic: What drew you into rap?

Nora Lum: I guess, like, I've always listened to rap, and I remember I specifically started listening to like pop-rap when I was like 11, you know, like Shaggy. I love Shaggy. And then I discovered like underground rap when I got to high school, and really that's when it kind of blossomed. I don't feel like my love for rap blossomed off of Shaggy.

But when I got to high school, I started listening to Talib [Kweli] and Mos Def and Necro and Ill Bill and all these underground rappers. And what they did that I didn't find in any other form of music is that they were able to take lots of words and fit them in, which is a hard thing. You can't really do that with acoustic and singing.

What are some of your favorite things to rap about?

NL: I like to rap about things that are funny, but mostly things that are relatable. I remember there was this one song with Ja Rule, and I forgot exactly but it was with Ashanti and there's a line in it that was like, "She hit me up on AIM." But that wasn't the actual line, it was something else, but I was like, "Oh my God, he uses AIM!" Like I remember thinking that as a kid, like, "Yo, Ja Rule uses AIM. That's so cool!" You don't really get a lot of that relatability.

NL: Yeah, well "NYC Bitche$" specifically did well because people really understood it. There's so many songs out there that are just, like, "the Empire State Building!" And if it's more exacted, it resonates with people. It doesn't even have to be a good song.

I read that you don't want your songs to be totally PC or this activist kind of thing.

NL: In the beginning I was scared of that.

Why do you think people think they are?

NL: I think any vagina song is going to be seen as a feminist anthem, whether it's the artist's mission or not. It's in the eye of the beholder. If it's just about vaginas, but the writer didn't intend it to be, it is a feminist song by default. The reason why I kind of argued for it not to have a feminist mission is that I have a vagina, so I'm not going to rap about a penis, because I own a vagina. It's me; it's me. It wasn't for all women because if you really dissect it under a feminist lens, it's never going to fit in because it's still girl-on-girl hate. There's still elements of the song that's kind of like, "OK..." so I don't think it will ever be studied in a class.

I read in New York magazine you feel like you have to prove yourself in this industry. What kind of barriers do you face, and has that changed since you said that in 2013?

NL: I think people always want to hear that there are barriers that exist for us. But the more I started to realize artists that are kind of like me in my lane, like if they were white or African-American, they often had trouble because it wasn't the quality of their music, they just didn't stick out. One thing that I have to admit: It's not privilege, but I stuck out. In a way, I think that, like if I was just a young, skinny white kid, you know, like I have met so many of those up-and-coming rappers that they always ask me, "How did you do it?" Like, "Why you?" and I can't help but think when people saw me with big glasses and headphones and holding a gun, they were going to click on it, you know what I mean?

I think there are barriers, but I think for me specifically, my barrier is being rejected from the kind of hip-hop elitists that think I'm not appropriating it, but just not serious about it. They think I'm a Lonely Island, Weird Al, you know — like a parody rapper. So that alienates me from a lot of things.

Another barrier for me is that I'm not overtly sexualized in that I'm not dancing; I don't have choreographed dances. I don't dress promiscuously onstage. I don't come out with outfits. I'm very toned down and not sexual, and I think that alienates me a lot from certain pop audiences.

How do you feel about the misogyny in hip-hop? Since guys always rap about women, do you feel like you have to do the same?

NL: I'm not intimidated by the misogyny in hip-hop, but I think one thing I regret right now is that I didn't have 55 tracks just yelling about that and just kind of confronting that. I think that's one thing I should do, because, you know, men are not smarter than women. I can come up with a witty joke just as good and probably 50 times better than any misogynistic comparison you're making right now. And I'm not intimidated by men in the industry. Like yeah, misogyny exists in the industry and I think it's slowly changing, but I think it's also something that women can do. We don't have to feed into it. We can dish it out too; we just choose not to.

I read you studied women's studies in college. Do you think that ever comes out in your raps or influences you in any sort of way?

NL: I think what women's studies did for me — and it was the most I ever learned that really impacted the way I saw the world — is [gave me] a way of looking at the industry and my place within it. Because there's a lot of racial aspects of being an Asian woman in hip-hop, like that's just always going to exist. And to understand hip-hop as something that is, you know, really a minority-owned music and how we're partaking in it and not stealing it, that's an important thing that I think you have to know when you're becoming a rapper.

That sounds like such a fine line. When does it become stealing?

NL: I think it becomes stealing when you don't acknowledge that it's not your music. You have to acknowledge that it is black music. It's changed, but there are people that are using it solely to make money. If you look at every Korean rapper, like a lot of them use the N-word and a lot of them don't speak English and can't even pronounce their own name. That's just the most extreme version of borrowing and stealing because they're so detached from what it actually means.

I'm from New York; I'm from Queens, so I grew up very close to where Nas came from, where A Tribe Called Quest came from. We're a part of that world, and so I think it touches more on being a New York City kid for me than being just some Asian bitch who liked rap. I really felt like I was a part of it growing up.

Have you ever been in a situation where you felt pressured to be something you're not, and you were like "nah"?

NL: In music it's always been my own thing. But there have been some occasions in the TV and film world where I was literally asked to be more Asian and to put on an accent. Then there were situations where I was asked to be more "urban," and that was the word that was actually used to describe what the director wanted more of. This was for a TV thing and it was by a white person. Music has never told me to be something.

Why do you think there's such a lack of Asian women in music?

NL: I think the reality is that you have to look at environmental factors, because Asian women are not less talented than any other women, but we grow up — and it's also true of Asian men as well — with probably immigrant parents, like probably fresh-off-the-boat immigrant parents who don't understand the music industry. That's just not an available goal for us.

I think Asian women are brought up to be very traditionally like "I'm going to get married." A lot of the modern girls I meet are kind of office biddies. They're not like Chinese, like really Asian, but they're extremely systemized, like they went to a great college and they got a great job and now they have to be clean-cut and uphold this thing and get their money. There's not much risk, like I took a big risk by being a rapper.

Right. When I think about growing up, I didn't have many role models to look up to.

NL: Margaret Cho, but that was about it.

When I think of your music, I think of like Broad City. Do you see that similarity at all?

NL: I do. My music should speak to millennials because the coolest thing about my fans is I feel like they're people that I would hang out with. I think why people relate to shows like Broad City is because this is our lives, you know? When we find voices that speak to us, it's very exciting and very inspiring. Millennials as a group, we haven't really been represented until the last three or four years in any kind of media. The media wasn't ours, and more and more it's becoming ours. It's important to have that shared.