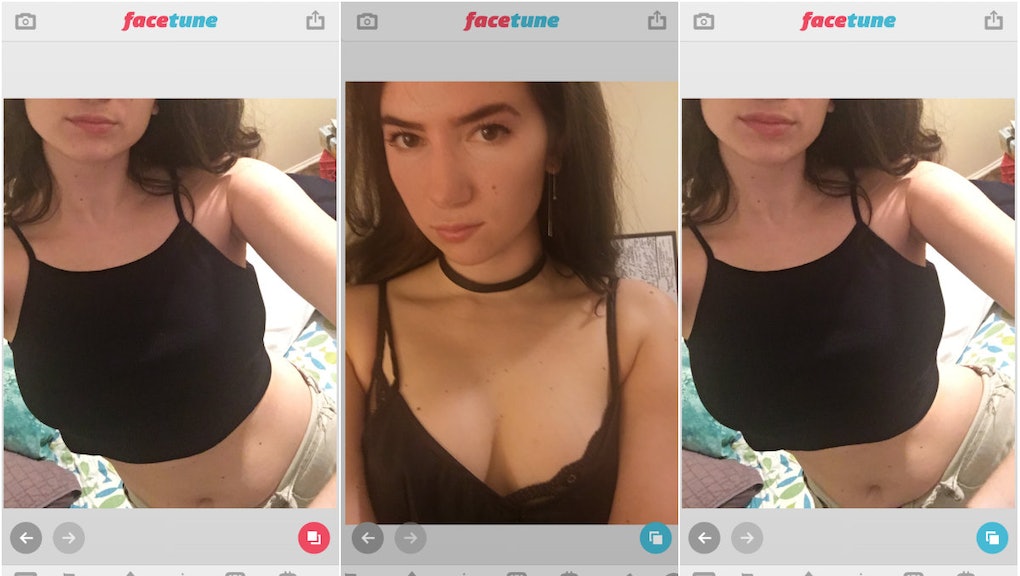 My Instagram account by itself isn't pretty. But after I spent $3.99 on the photo-editing app Facetune, I had the power to make myself pretty enough for Instagram.

I wanted to live a week in the life of a Facetune faithful, which meant committing to using the app to get rid of all of my perceivable flaws: pores, extra pounds, uneven hair color, unwhitened teeth — everything.

In theory, Facetune is praiseworthy for being a great equalizer. For just $3.99, Khloé Kardashian, thousands of Instagram models and countless "normal people" can pay the same fare to ride the train to its last stop at validation station. But there may be downsides.

To experiment, I used it for a week and posted as many subtly edited selfies as I felt I could manage without being unfollowed by every single sane person in my life — or without developing minor self-image issues.

As you might expect, both things happened. But I digress.

Facetune has a plethora of features. It's been around since 2013 and brands itself as a photo-retouching app that everyone can use to "easily achieve magazine-style results." You can whiten your teeth, smooth your skin, enhance any detail you want highlighted, reshape your face and change the color of anything by editing for "tone." These tools require no knowledge of actual photo editing; instead, they're one-stop mini-Photoshops. With several simple magic wands, Facetune can turn Photoshop dummies into editing wizards — on Instagram, at least.

As you can see in my first post, I don't look wildly different.

I edited the "tone" of my mane, so that my hair came off a bit more blonde. I airbrushed my skin so that I have a glow, like I slept well and put on nice makeup. Finally, I used the "details" feature to highlight my eyes, since I'd used the "smooth" airbrusher to get rid of essentially all my other features.

In terms of validation, the results were astounding. There were complimentary comments from friends, and likes from guys who hadn't liked a damn thing as of late. It worked.

Next, I posted two distinct Instagram classics: a #NoMakeup and a #FitFam photo. I heavily edited a picture of me in a sweatshirt — "hair tied, chillin' with no makeup on" — like Drake intended. Next, I nipped my waist and blew up my chest on a pic of me wearing less before going out more, which is something Drake specifically advised against.

This feedback was more interesting: The #NoMakeup pic caused a friend to text me to express his concern, and he told me he was confused by the blatant edits.

This was not soothing, but it didn't deter me from posting my #FitFam pic, which garnered rave review comments like "giant tits" and "sensual crocodile hunter."

Personally, I couldn't unsee the distortion in the curve of my sheets, and how much larger my arm looked after being dragged into my waistline. The change was profound, and I felt like a liar and a scammer. Would I be exposed as a hack for editing so heavily? And how much different would the response have been if I'd posted my regular, not "giant" tits and flat hips?

For my final act of Facetune magic, I took it to Twitter. It doesn't feel like the place for "like"-pandering, but I had to see how I'd fare in a different market. I posted three selfies; two were a set that had very clear edits, and one was another #NoMakeup situation.

Texts rolled in after I posted them.

"Your hair looks so long dude."

"Your skin looks *so* good. What are you using?"

At a certain point, it seemed wild to imagine the social lives of people who use Facetune regularly. In just a couple of days, I'd become accustomed to the feedback cycle of compliments and validation, and even the power to give advice based on it. The length of my hair? Vitamins. My glowing skin? A Clarisonic face brush! Of course, these were lies, but I wasn't going to blow my cover.

While Facetune is, at its core, just a photo-editing app, it's also a powerful sales tool for the same reason. Your face becomes a brand, and that brand has to be consistent. Is this how we come to believe the lies that models look good by living on Fit Tea, UV teeth-whitening gadgets and simply splashing their faces with cool water?

But, perhaps ironically, I found it comforting to know that I could never achieve Facetune results IRL with simple lifestyle changes. Facetune is a role-playing game, one that we all play when we check our timelines. We know it when we see it, and even when we don't, we respond to it with inquiries about why it's so good, like my friends did; we aren't stupid. If we can accept our internet selves as a fantasy world that's separate from our reality, then we don't have to think that's how we should actually look IRL. We can see Facetune at face value, as a tool for fiction — as fun.

If we see it as an improvement to reality though — as aspirational — then I'm not sure we can escape that whole nightmare. I felt oddly secure about the new power to control every facet of my appearance that my leveled-up selfies gave me, but I felt insecure about wielding it. I felt compelled to tell people that I was just a Facetune DJ. My photos were all shitty remixes.