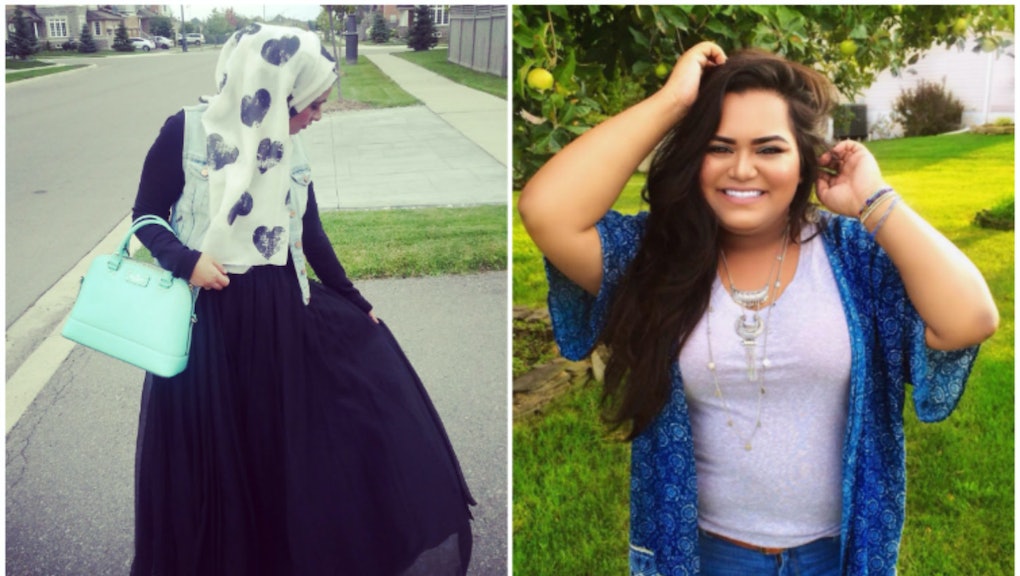 Nabela Noor, a 24-year-old beauty and lifestyle vlogger, has made a career out of being honest on the internet. Since 2014, she has documented nearly every aspect of her life online, from how to perfect date night makeup to how to deal with online fat shamers to figuring out the best way to repurpose candle jars. She has been open about topics including her marriage and religion, and in turn has accumulated over 167,000 YouTube subscribers and 40,000 Instagram followers.

Given her fan base and outspoken nature, YouTube and Google approached Noor in January about asking the Republican presidential candidates a pretaped question at a Fox News GOP debate.

Given the platform, she asked the candidates (excluding Donald Trump, who quit the debate) how they felt anti-Muslim rhetoric may be affecting America. At first, she wanted to use the platform to ask Trump about his proposed policies' impact on the Muslim community, but once he quit the debate, she asked the remaining contenders a broader question about how anti-Muslim rhetoric may be affecting America.

"In 2015, the number of hate crimes against Muslims in the U.S. has tripled. And on social media, where I spend a lot of time, I've seen many attacks directed towards fellow Muslims ... As president, what would you do to address this toxic climate and promote increased tolerance in the United States?" she asked.

After 12.5 million watched that debate, Noor expected to gain a few followers online. What she didn't expect was that months later, her inbox and comment sections would be inundated with death threats, graphic images and hate speech.

"I was now not just Nabela Noor, the beauty vlogger, but I was also Nabela Noor, the girl that spoke at the GOP debate about Islamophobia and so with that came a lot of negativity and backlash," Noor said in a phone interview. "There is an existence of intolerance and it's only getting louder."

In March, two months after Noor's debate appearance, a slew of Instagram accounts created by Muslim beauty and fashion bloggers were hacked. Australian journalist Jennine Khalik first reported on the attacks via Twitter, noting that on accounts where the usual post involves eyeshadow application tips or selfies of women wearing hijabs, there were Islamophobic memes and videos featuring Trump.

She also reported that Muslim women online with huge followings (like @NabiilaBee, who has 327,000 followers and @mariammoufid, who has 83,000) were receiving threatening messages. Soon, outlets like the Cut, Teen Vogue, Elle and also Mic were reporting on the hack.

Online abuse is nothing new to Noor and her peers. Since 2014, Noor said she has had her fair share of rude comments, mostly pertaining to her body and weight. As a woman on the internet, that's something that can almost be expected, but the comments she got after the debate were different. Now, according to Noor, the majority of the hate she receives online is directly in response to her faith — and vehemently so.

"I got so many people tweeting at me with death threats," Noor said. "It really frightened me and really proved what I was trying to say. Death threats and pictures of pigs and the Quran in their mouth."

Why Muslim women? Despite blogs like these seeming rather harmless, somehow, to these hackers, they are not. According to Noor, this may have to do with the fact that the accounts showcase young, successful, Muslim women living lives that are "normal" — aka the antithesis of what these hackers and commenters believe about Muslim identities.

It just so happens the hackers targeted hugely popular Instagram accounts in the attack, in some cases deleting all their photos. Among them were @HijabHouse, which has 169,000 followers, and @HijabMuslim, which has 491,000 followers.

"If you are a Muslim online communicator and you are vocal about your faith, you are then subjected to even more hate," Noor said.

Politics matters: According to Noor and Ikhlas Hussain, who's been blogging since 2011 and runs the Muslim Girl, the political climate hasn't helped. Both women have been blogging for years now, but have seen an obvious uptick in online abuse mentioning their religion in the last year.

"I think it has something to do with the political atmosphere currently, that Donald Trump is definitely contributing to," Hussain, who has 62,000 followers on Facebook, said in a phone interview. "There's a lot of negative feelings towards Muslims in the media and we aren't portrayed well at all, and so it carries over to the online world as well."

Because people like Trump are getting so much press coverage at events saying things like "Islam hates us," while publicly announcing a proposed policy for a "total and complete shutdown of Muslims entering the United States," the climate and conversation around Islam is indeed ever-increasingly hostile. In fact, more than 80% of media coverage on Muslims is negative. Meanwhile, only 6 in 10 Americans say they know a Muslim personally.

It's become a problem so concerning that in March 2015, the FBI started keeping track of hate crimes against Muslims and Sikhs. Now, women like Noor and Hussain are experiencing a unique brand of online abuse.

"It's become more commonplace to be so vocal about your disagreements or issues with different things," Noor said. Trump has "made it so it's almost dinner table conversation, but it's not. It's riled up the wrong sort of excitement."

How they deal with it: It's a somewhat helpless situation the bloggers find themselves in, with little they can do except for block users and come together in a sign of support for one another.

"A lot of my peers that are Muslim, they reached out to me and let me know that I wasn't alone and that they would stand by me," Noor said. "It was really comforting to know that I had their support. No one wants to make a video on lipgloss and see comments that they should rot in hell."

What keeps them going is an effort to prove the hackers and commenters wrong. The fashion industry is paying more attention to Muslim women than ever before, with hijab lines by high-end designers like Dolce & Gabbana to mainstream retailers like Uniqlo. In some ways, it seems, Muslim women are getting more attention from fashion, but that's coming at a cost for the women who are on the internet, proudly posing in their hijabs. For Hussain, though, it's worth it to be a role model to young women like herself.

"We've made our choices and are proud of ourselves, that's why we share it online," Hussain said. "Also, we're just like other women. We like to dress up, we like to look nice, we're insecure, we're sensitive, we work hard, we have families, we love, we feel pain, we do everything the way we do.