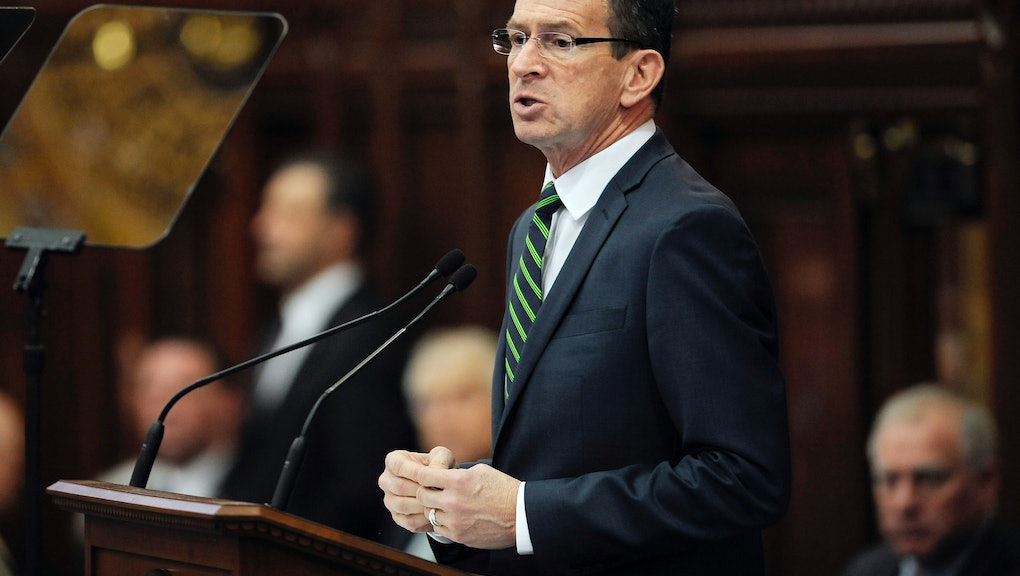 Once one of just three states whose justice system considered all 16- and 17-year-olds adults, Connecticut was long a poster child for the way that state criminal justice systems could inflict more damage on communities than they prevented by being tough on crime.

In 2010, Connecticut finally began to dismantle its exceptionally harsh policy on its citizens of that age group. But for Gov. Dannel Malloy, catching up wasn't enough. Now he wants to lead the conversation on how the criminal justice system can be more progressive in its treatment of young people who break the law.

Under the banner of what he calls a "Second Chance Society," the Democratic governor has released a raft of proposals that would make the state's courts and correctional facilities far less focused on punishment and more committed to rehabilitation and reentry into society for young offenders.

Read more: One Dark Side of the Criminal Justice System That Everyone Should Know

The signature provision among his new proposals raises the age threshold for trial as an adult from 18 to 21, a cutoff that would be the first of its kind in the nation. Other reform measures would strictly limit the period of incarceration for young people and keep their identities private from the moment of arrest.

Mic sat down with Malloy to discuss how he plans on taking his state from a laggard in youth criminal justice to a leader in it. For the governor, the legislation — which an aide said could pass the Democratic-controlled legislature in the next month — is as much about common sense as it is about compassion.

Mic: What initially led you to come to the conclusion that raising the threshold for being tried as an adult from 18 to 21 would be a good idea?

Dannel Malloy: What we know is that young people get in trouble. They make stupid judgments, or have no judgment. What that frequently leads to is establishing a criminal record, which a lot of young people don't necessarily understand the significance of. What I'm trying to do is make sure we're getting people on the right path and help them avoid ending up with a criminal record which would otherwise deny them decent housing, decent jobs and getting a student loan.

"We won't sell liquor to anyone under the age of 21, but we'll treat an 18-year-old as if they're an adult in the criminal justice system."

If you look at some of the judgments society makes about young people, they're inconsistent. For instance, we won't sell liquor to anyone under the age of 21, but we'll treat an 18-year-old as if they're an adult in the criminal justice system. We're acknowledging that people this age don't have the judgment to make certain decisions, but then we're punishing them as if they do; it doesn't make any sense.

A lot of my belief about the criminal justice system goes back to when I was a prosecutor in New York City from 1980 to 1984, or when I was mayor of a city for 14 years, and I came to the conclusion that America became more committed to more punishment than it was permanent reform, and ignored the steps that could perhaps avoid requiring punishment to begin with. So I'm trying to build a different criminal justice system.

Nobody determined scientifically what the right age to treat people as adults was. But now we have a whole body of scientific evidence that really shows that the maturation process plays out through age 25, and that a lot of people don't have the judgment necessary to be treated as an adult when they're 18, 19 or 20. So we want to extend juvenile treatment to that population.

In the legislation there's also a recognition that people don't make good judgments when they're young — in our state it's "youthful offender status." We recognize that you're not a juvenile necessarily, you're over the age of 18, but we want to help you make sure that this lack of judgment isn't going to permanently affect you. It allows us to treat certain lower-level crimes differently than we might otherwise. And I want to extend that immediately through age 21, and quite frankly we should look at having that program go beyond even the age of 21. The goal is to change people's behaviors, not to punish them permanently.

How do you respond to opponents who say this could cause an uptick in crime?

Amazingly, most people get it. They understand it. Once you raise the issue, and you have the discussion, there's not as big a pushback. I rolled out in January the concept of raising the age for juvenile treatment, and was the first governor to do it in the United States. And since then, other states have joined and are looking seriously at it, like Illinois and Vermont. Somebody has to question the orthodoxy, but once you actually raise the question, Americans are actually likely to examine it.

There would be carve-outs for things like particularly violent offenses, in both juvenile and youthful offender status. We're not going to start this overnight. We'll raise it a year from January by one year. In the meantime, I've asked a body of people who already exist in state government to review these policies and practices to start the process of addressing it for 19- and 20-year-olds. We're taking steps to get to the ultimate position.

"We're heavily invested in permanent punishment as a society. "

Connecticut was once way behind — we were treating 16- and 17-year-olds as adults until much later than most states. What we found was when we finally took that body of people out of the adult court system and put them in the juvenile system, we were actually getting better results. What we've also seen is that by breaking that kind of lock step — you do something wrong today, we're going to make sure you end up with a criminal record  — we're actually enjoying our lowest crime rate in 48 years, and our prison population is dropping rapidly.

As I watched our youthful population in our prison system drop by 52%, I asked the corrections folks to do a survey of the folks who were in jail, over the age of 25. We found that 75% of the prison population was incarcerated at least for some period of time before their 21st birthday.

You trace the lower crime rate to that shift in treating and detaining 16- and 17-year-olds as juveniles?

DM: I think it contributes. We're also seeing a decrease in recidivism. We're changing our policies in our prisons that are more supportive of recovery and reform. We've opened up specialized centers in our prison system for veterans, for people getting ready to go back out to broader society. We're making sure everyone has access to health care before they leave prison. We're doing a lot of things differently.

What are some of the most important reforms of the Second Chance Society that you've already successfully pushed for in Connecticut?

DM: We've closed three prisons, and yet we have the lowest crime rate in 48 years.

We specialize in treatment, putting a lot of energy into people who are in jail for longer periods of time, spending time at the end of their sentence getting them ready to go back to broader society. We've opened the center for veterans, so if you want to get ready to go back to society with other veterans, in essence what we're trying to do is put people back in circumstances that remind them of their finest hour, not their worst hour.

We just started a center for DUI, so if you're in jail related to a DUI conviction, we are in essence establishing a center for those folks, which is far more therapeutic than we've ever been in our prison system for the population that's there related to DUI.

You visited Germany not too long ago and observed its prison system firsthand — what did you learn?

DM: I did visit a German prison in Berlin, a city of 3.5 million people — approximately the same size as Connecticut. They have about 4,000 people [incarcerated]; at one point we had [nearly 20,000]. They are less punishment-minded, and more reform-minded. Their system is better. It acknowledges that people are going on back to society and attempts to give them a skill set necessary to avoid coming back to jail. We don't do that, we're heavily invested in permanent punishment as a society.

In Connecticut it's called the Department of Corrections, not the Department of Punishment. In that name is supposed to be the idea that we're going to help you become a useful citizen again, a contributing citizen, somebody with a job. I want our actions to speak of our mission.