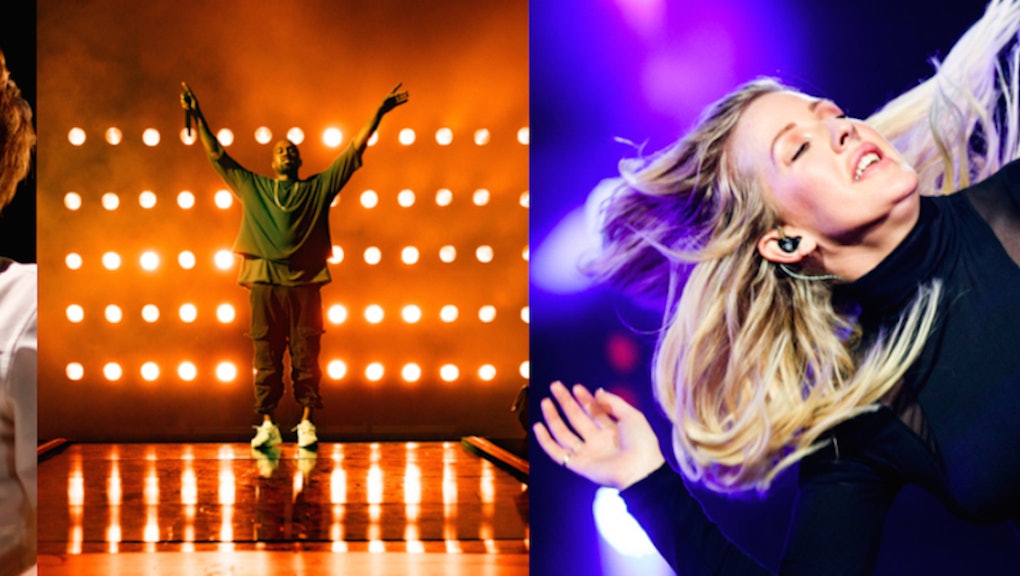 Global Citizen Is Aiming to Change the World with a Mumford & Sons, Kanye West Album

Global Citizen (noun): "A global citizen is someone who self-identifies first and foremost, not as a member of a state, a tribe or a nation, but as a member of the human race."

People have felt music's impact and ability to shape society for centuries. Its roots in social movements date as far back as "Amazing Grace," a hymn initially penned by slave trader John Newton in 1772, as he sought forgiveness from God for his profession. The tune soon became the theme song behind anti-slave trade movement throughout Britain in the early 1800s — an instrumental tool in uniting like-minded citizens hoping for change.

Hugh Evans, the co-founder and CEO of Global Citizen, is well aware of the profound effect music can have in social movements. He provided the above definition of what it means to be a global citizen during his TED Talk on Monday, highlighting the importance of creating sustainable international movements through music. So, when Mumford & Sons' Ben Lovett called him to discuss creating the world's first crowdsourced album — all the way down to its lyrics — Evans knew he couldn't pass up the opportunity to be a part of it.

Lovett has been hard at work on the project, titled Metamorphoses, recruiting thousands of people around the world to submit lyrical ideas to inspire the music housed on the album. He's enlisted Kanye West, Ellie Goulding and The National to help bring it to life, and expects it to be released later this year.

I talked with Evans about Metamorphoses, and while he wouldn't tell me if Beyoncé, a major Global Citizen ally, is one of the unannounced artists appearing on the LP, he did open up about crafting the album's universal message with some of music's most visionary minds. We also spoke about the 2016 campaign season, the expansion of New York City's Global Citizen Festival and music's role in creating a world we'd be proud to leave for future generations.

(Editor's note: The following interview has been edited and condensed for clarity.)

Mic: How has it been working with international megastars in trying to create an album crowdsourced by fans, and how exactly will Metamorphoses play into your plans of building a sustainable movement?

Evans: To Ben Lovett and Kanye West's credit, this has been entirely artist driven. The whole idea was birthed by Ben Lovett of Mumford & Sons, it was his idea and he deserves full credit for that. He reached out to Kanye, because they're mates, he reached out to Ellie Goulding and The National, he reached out to, you know, there are some amazing artists that have more recently joined, they'll be announced soon as well.

Even while Ben's been on tour he's been talking to us almost every single day about the project. He's got the labels on board; the Apple Musics of this world are behind it; he's reached out to absolutely everyone. It could become the world's first crowdsourced album, down to the lyrics. Even the way in which you have to access the album ultimately will be through becoming a global citizen. I think that's where artistry and a movement come together perfectly because most traditional charity albums have taken a very binary approach, with artists releasing them and attempting to raise as much money as possible. It's a tempting but very temporary measure.

Wouldn't it be great if instead of releasing them for money, we release an album and try to raise a movement? Through raising a movement, you not only inspire the small number of people who purchase the album, but millions more who become engaged as a result of that process. What we think we're going to be able to do, which is really cool, is for every action global citizens take through this process will be reported back to the artists to see the numbers they've inspired.

Can you divulge any information about those additional artists? Specifically, Beyoncé has been a champion for the Global Citizen movement — will she make an appearance on Metamorphoses?

Evans: [Laughs] I can't give out any of that information yet.

Can't say we didn't try. Currently, the United States is going through a tumultuous election season, to say the least. Candidates have lambasted minorities, immigrants around the world, women, LGBTQ communities — really any group that's marginalized throughout history. Is the current political landscape obstructing Americans from becoming global citizens?

Evans: I think it's giving people a stark choice. For the first time, people have to choose what they think is reasonable, fair and just.

Often we hear politicians and even some corners of the media talk about refugees as if they like being refugees, as if it's really a choice. Being a refugee has to be one of the most humiliating, undignified processes. Who wants to leave behind their home? Who wants to leave behind their pictures, their memories? Victimizing those that are already victims is the worst form of politics. These are the most vulnerable people in the world, and we have the political gumption to make them even more vulnerable? It defies logic.

"Victimizing those that are already victims is the worst form of politics."

Any thinking person has to see that a refugee is already a vulnerable person. Why politicize it and make them more vulnerable?

In 2006, you organized the Make Poverty History concert with U2's Bono and Pearl Jam, which kicked off the same time the G20 summit was held in Australia. Former Prime Minister Kevin Rudd heard your message and doubled down on his government's efforts to increase foreign aid by adding $6.2 billion to their original commitment. But portions of that money have disappeared since the Australian government changed six years later. How did it feel when you found out your efforts were undermined, and what did you learn from that moment?

Evans: It's utterly devastating when a policy that has the potential to effect so many lives is reversed.

Kevin Rudd was actually in our office yesterday, and he talked to the staff about that time. He said that the thing we did most effectively was create essentially an army of volunteers in all of the swing states across Australia. That army of volunteers created enough political pressure, and he got swept up in the moment, so to speak. Making that commitment was something he felt was right for them, but he said all of his cabinet members were very nervous at the time about such a significant announcement he would make. He followed through, but when his party gave an inch, the opposing party, the liberal party — the conservatives in Australia — they took a mile, and so now all of a sudden we're seeing one of the largest foreign aid cuts.

What we've learned through that process is that one-off spikes is not enough. We need to build a sustainable, long-lasting, well organized, machine of a unit, that is capable of sustaining public engagement. If you follow the premise that democracy still matters, then you need to sustain those citizens' voices, not just in the good time, like a concert, but in the hard times, too.

What is the message you and artists collaborating with Global Citizen hope will transcend into global movements in the long run?

Evans: When Eddie Vedder and Beyoncé collaborated last year on "Redemption Song," as one of the final songs they sang on stage last year at the Global Citizen festival, it was an inspiring example of using a collaboration in music to inspire people with an anthem that is more familiar with this generation.

We're now entering into our fifth anniversary of Global Citizen festival, we've got big ambitions to take it around the world and we'll be able to share more on that in the coming months. My dream, which I hope is the dream of the artists we're working with, is to inspire a modern-day movement to end extreme poverty. That they'll use their talents not just in the next album cycle, but to inspire people like never before.

That would be really breathtaking.