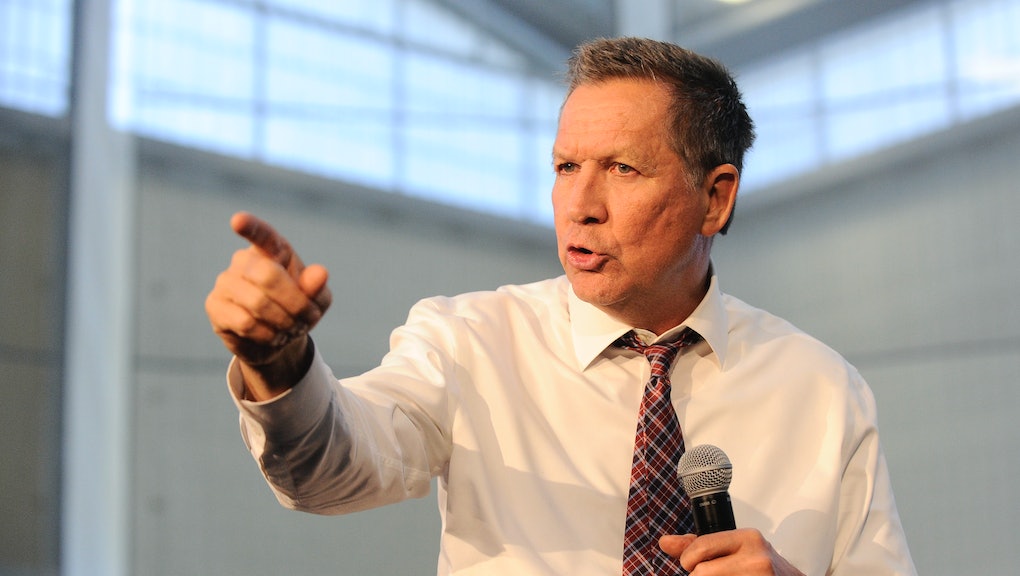 7 Times Republicans Told Women How Not to Get Raped

At a campaign event on Friday, Republican presidential candidate and Ohio Gov. John Kasich offered a tip to young women who don't want to be sexually assaulted in college: Don't go to parties with alcohol. As if they've never heard that one before!

Kasich's suggestion isn't exactly original: Women are frequently reminded in myriad different ways that they shouldn't drink if they don't want to be raped. In addition to being pretty tired advice, Kasich's message isn't even particularly useful: As the governor's campaign later clarified in an apologetic statement on Twitter, the only people truly responsible for preventing rape are rapists themselves.

That said, plenty of Kasich's GOP compatriots have noted before (and will probably note again) that there are plenty of things women can do to avoid having their rights and bodily integrity violated. So, Mic has rounded up some of the most sensitive, insightful commentary from several prominent Republicans about sexual violence to help potential victims avoid sexual assault.

1. If you go to a party with alcohol, don't drink.

Not long before Kasich told young women they'd be better off staying in, Texas lawmaker Myra Crownover suggested college girls stay sober if they want to party, because drinking is what leads to sexual assault. "I would be curious to see how many times a pure, sober sexual assault happened. And I think that's something we need to talk about," Crownover said during a 2016 House Committee discussion on campus sexual assault. (The answer, unfortunately, is quite often, actually. But hey, might as well stay sober, ladies.)

After a group of 18 men gang raped an 11-year-old Texas girl, Florida state Rep. Kathleen Passidomo claimed the attack happened "because [the victim]" — a child — "was dressed like a 21-year-old prostitute." Sure, people might say that sexual assault survivors are never "asking for it," but according to Passidomo and others, it's probably better just to be safe and make sure you're covered up. When that doesn't work, just remember men can't control their urges.

3. Don't join the military either.

In recent years, the United States military has made efforts to curb egregiously high rates of sexual assault in its ranks. However, as conservative commentator Liz Trotta explained in 2012, it might be easier to avoid sexual violence in the armed forces altogether if women just didn't enlist. After all, as Trotta put it, "What did they expect? These people are in close contact."

People can't consent to sexual activity while they're unconscious. Codifying that fact seemed unfair to Utah state Rep. Brian Green, who in 2015 bemoaned a bill that would make it possible for prosecutors to charge people with rape if they have sex with their sleeping partners.

"I'm not trying at all to justify sexual activity with an unconscious person. It's abhorrent to me, but do we as a body, a legislative body, want to make that rape in every instance?" Greene reportedly asked during a meeting of the House Judiciary Standing Committee.

Perhaps a better way to avoid the whole mess of sexual assault charges would be if potential victims were simply never unconscious around other people, who might not know better than to initiate intercourse with someone who is not awake.

It can't be rape if a victim enjoys it, right? At least that was the logic Texas Republican gubernatorial nominee Clayton Williams offered in 1990, when he suggested women "relax and enjoy it" if they're being sexually assaulted. Williams later claimed he was just joking, because sexual violence is always a fun thing to laugh about.

One of the biggest problems with having sex outside marriage (not to mention a reason everyone should just keep it in their pants) is "some girls rape easy,"  according to former Wisconsin state Rep. Roger Rivard. In 2012, Rivard warned young people not to have premarital sex because "just remember, consensual sex can turn into rape in an awful hurry" — implying women lie about rape to cover for their own bad choices.

One of Kasich's fellow GOP contenders for the White House, Donald Trump, was previously accused of violently assaulting his ex-wife, Ivana, while they were married. However, as Trump attorney Michael Cohen asserted last summer, the Republican presidential candidate couldn't possibly have committed sexual assault because "you cannot rape your spouse." This is factually incorrect, but to avoid any confusion, it could be better to stay single.

Obliterate yourself from the face of the Earth because you're probably going to get raped no matter what.

I mean, this seems to be the overall conclusion, right?