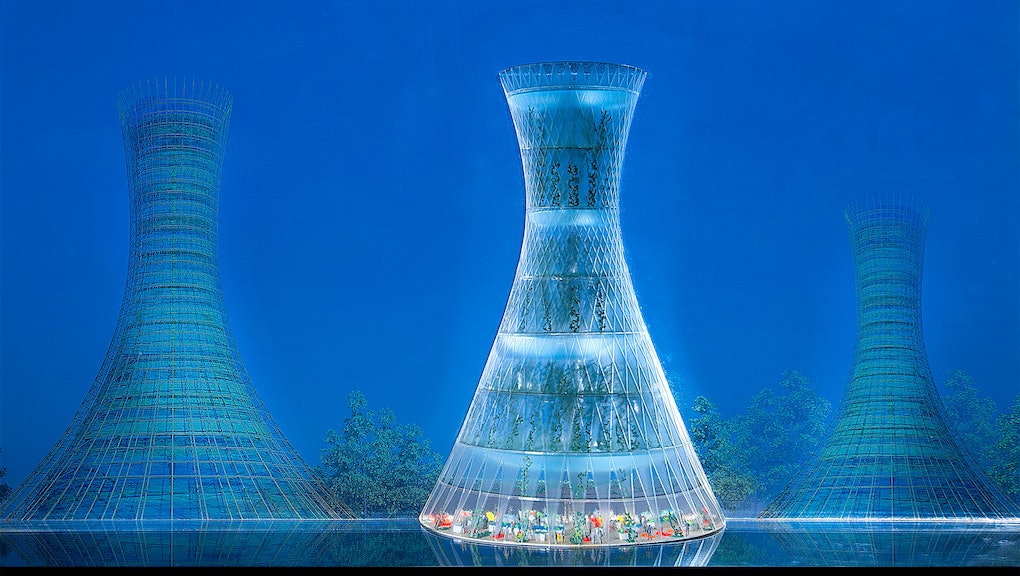 Architects at London-based architecture firm Roger Stirk Harbour and Partners have mocked up a futuristic farming tower that could feed hungry urban dwellers who lack access to food. They entered the idea in the Expo Milano 2015, which prompted designers to create a building that could help solve hunger while also addressing a growing world population and increasing migration to cities.

Their brainchild is called the Skyfarm.

How it would work: The multi-tiered bamboo structure is designed for areas that don't have nutrient-rich soil for farming or abundant water resources. The building would use a recirculating stream of water to fuel hydroponic and aeroponic farms, as well as a fish farm. Fish waste would act as fertilizer for the plants, and clear panels would give the indoor farm lots of access to light.

In addition to the aquaponic system, the building would also have space for markets in the ground floor and a public education center where people could learn about vertical farming. The top of the structure would be equipped with water tanks and wind turbines for generating electricity.

The concept of farming towers is nothing new. Columbia University Professor Dickson Despommier is a long-time proponent of vertical farming. In 2011, Despommier published a book advocating for vertical farms as an effective way to bolster the world's food supplies. Since then, vertical farms have popped up around the world, according to the New Scientist.

Though only a concept right now, Skyfarm can be scaled for a variety of environments, according to the firm. For instance, a smaller version could be constructed in a school yard, and a larger installation could be made to serve larger communities.

"Its geometry can also be adapted depending on the Earth's latitude and the amount of sunlight available," the firm wrote on its website. "In cooler climates, a double skinned enclosure and heating could be added to create optimum growing conditions."

Skyfarm would cost more than an average horizontal farm to set up, according to the designers. But there are long-term benefits: "The ability to grow produce with a short shelf life, such as strawberries, spinach and lettuce, around the year and close to market without costly air-freighting, makes it an attractive, sustainable proposition," the firm wrote.