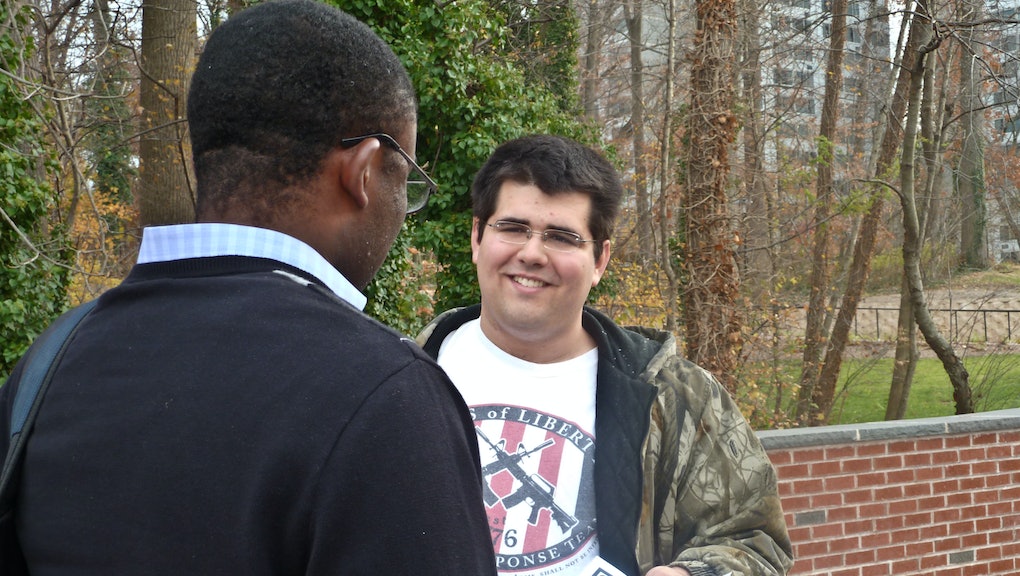 Join us, if you will, on a trip through time: The year is 2012, and Matthew Heimbach — a 21-year-old college student and budding white nationalist — is launching an organization at Towson University in Maryland called the White Student Union.

The white student union is exactly what it sounds like: a not-so-subtly racist attempt to reaffirm white power where white power was never actually threatened. Its calling card, as documented by Vice and others, was a series of night patrols, in which white students and supporters stalked the Towson campus to protect white women from so-called "black predators."

One of these men is wearing a red baseball cap bearing Trump's signature phrase, "Make America great again." In an unsurprising turn of events, the Washington Post has revealed that the 25-year-old in the cap — who delivers a series of notably brutal shoves toward the end of the video — is none other than the very same Matthew Heimbach, all growed up.

Heimbach took credit online for attacking the woman the day after the incident took place. But now, 21-year-old Kashiya Nwanguma, a public health major at the University of Louisville, is suing Trump in a Jefferson County Circuit Court for inciting a riot, the Post reported. The suit also names Heimbach, accusing him of assaulting Nwanguma.

"It's hard for me to think about that day," Nwanguma told the Post. "It was a new side of humanity that I hadn't quite seen before. I know it looks like I'm smiling, but I was really in disbelief. I was like, 'What is going on and why is this happening? There's no way that people are acting like this.'"

But disbelief is not a feeling people who know Heimbach would be familiar with in this case. The Southern Poverty Law Center has described the 25-year-old as " the face of a new generation of white nationalists," and documents a series of remarkably racist and anti-Semitic statements Heimbach has made over the last four years.

According to the Post, Heimbach wrote online in March, "White Americans are getting fed up and they're learning that they must either push back or be pushed down." He recently unfurled a Confederate flag at Martin Luther King Jr.'s grave in Atlanta, and followed the recent terrorist attacks in Brussels by tweeting, "Hey Brussels, how's that multiculturalism working out for you?"

Heimbach graduated from Towson in 2013, and has since assumed a leadership role with the neo-Confederate League of the South. It's nice being able to chart the very public ascent of this white supremacist superstar — from Towson to Trump rallies and onward into the future. Can't wait to see what he does next.