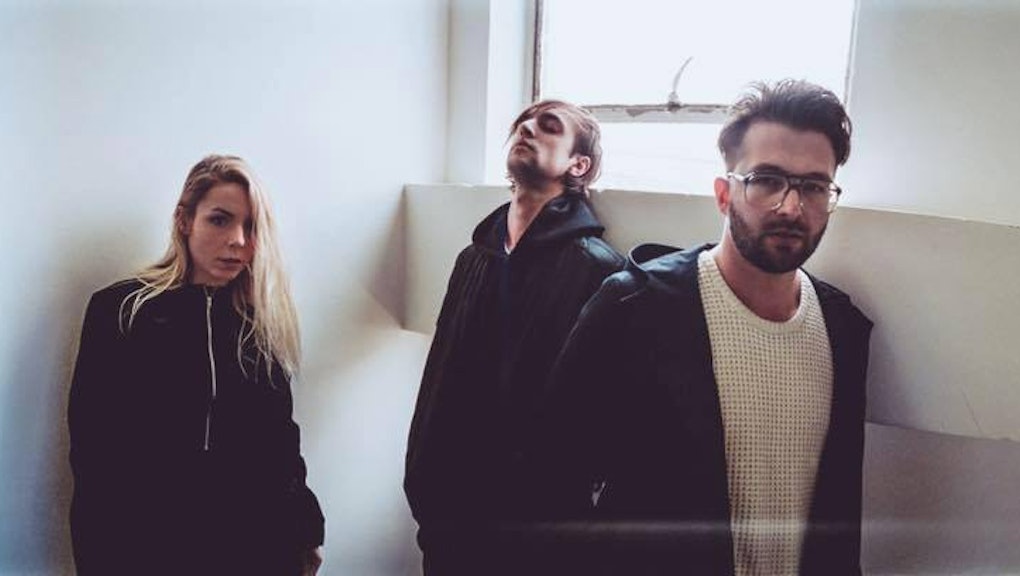 To the removed observer, it would seem Haelos vaulted from mysterious Hype Machine darlings to signed international tour headliners in a matter of months. Yet their rise has been long in the making.

Haelos' three members — Arthur Delaney, Lotti Benardout and Dom Goldsmith — pieced together their downtempo mediations on emotional isolation, spirituality and the inevitable cycles of pain and pleasure that characterize human life out of months of 14-hour recording days. That mood established on their celebrated debut, Full Circle, is regularly pierced by a sense of appreciation and reverence for this struggle. They describe their genre as "dark euphoria."

"There's loads of pain and the quest for answers, but there's loads of euphoria in there, and a lot of balance," Delany said in an interview during South by Southwest in March. "We really tried to work on that tension between those two extremes. I think that was a more honest picture of what it's like to be alive."

Crossing from the record into the present, Haelos has been taking great care to maintain this balance and apply the album's lessons to the whirlwind experiences accompanying their sudden rise. The insights they shared should resonate with anyone who's ever attempted to capture their personal experiences in a creative medium.

Mic: Do you think there's truth to the maxim that "great art comes from great pain"?

Arthur Delaney: I think that some writing is a desire to understand things you can't really pin somewhere. It's like this thing in a jar and saying, "This is a feeling. This is a moment. You can kind of go through it too. We've contained it for you."

I think that pain is a part of human experience. We grow when we feel pain. And often people perceive pain as a bad thing, but pain means growth. You're forced to reflect when you're in pain. So that's where I feel that idea came from, of artists needing to be in pain to create art.

There's loads of pain and the quest for answers, but there's loads of euphoria in there, and a lot of balance. We really tried to work on that tension between those two extremes. I think that was a more honest picture of what it's like to be alive.

That's interesting, and something I've been hearing from a lot of bands lately: Make honest music and it will find its audience. But being "honest" with oneself is not always the easiest thing. What advice would you give to a young creative band trying to tap into that?

Dom Goldsmith: The complexity of music is there's so much money involved. And when money comes into it, people start making compromises. Though if you're making music just to make money and money drives you that's honest, you know?

I think of it like going to cook for a friend. If you go and set aside hours to cook for someone, even if it comes out shit at the end of the day you've taken time for someone else's enjoyment because you enjoy doing that. If you put love into something, you get love out. It can be quite rewarding for everyone when it comes from a selfless place.

Launching into a record deal immediately after you all formed as a band has got to come with certain stresses. Have you all faced anxiety or stage fright working at this new level?

Lotti Benardout: Definitely. The more shows you do the less you get of that. I've started to do more meditation. Just 10 minutes of quiet, internal thought, or no thought — just zone-out time. I think that's really important. And just being in control of the thoughts that come into your head and not getting hung up on that.

AD: I definitely used to suffer from really bad anxiety problems. When you're a thinker and a creator and you're emotional, they come hand-in-hand.

"When you're a thinker and a creator and you're emotional, they come hand-in-hand." — Arthur Delaney

From a personal experience I surrender to that kind of mantra of like I don't know how much of an illusion of control we have over anything. The more I give into that, and be like it's just going to play out the way it's meant to, it means you worry about the outcomes way less.

DM: I think anxiety is always a fear of the future and a fear of what's to come. Are we going to survive it? The more you let go and not really caring where you're going and enjoying the moment, and meditation is an easier way of like achieving that state of mind — I don't think that means any of us are immune to worry.

When you're feeling anxious — and we all do — the thing we're learning about ourselves and each other is to communicate, to explain what you're feeling and really offload. If you carry around these weights, the moment you let it out into the universe and it's not in this one place, then you feel a bit lighter. It's learning to get comfortable doing that with people, people that you trust and love, and that's it.

AD: Which I guess is what music is doing on a wide scale.