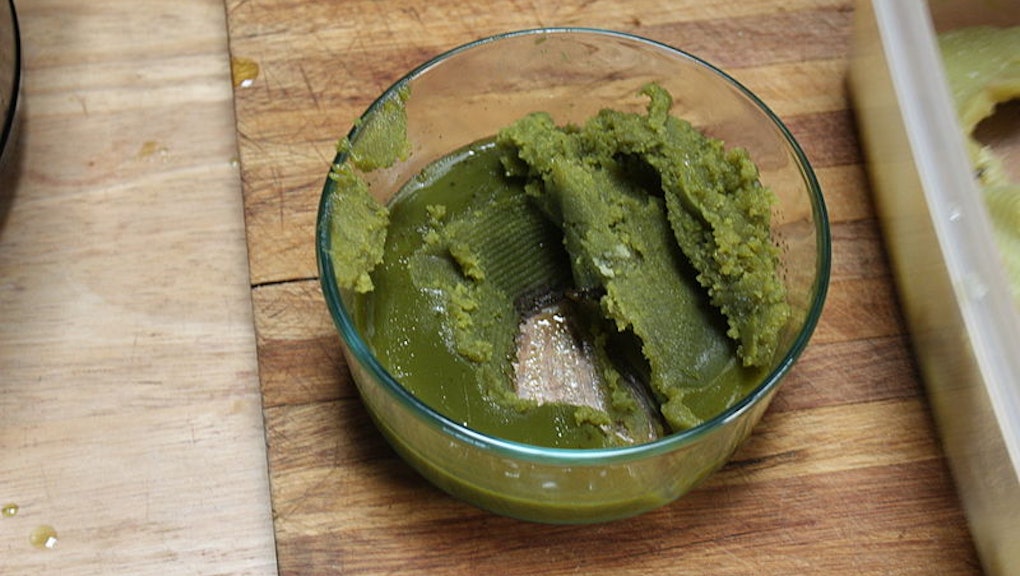 There's a Big, Surprising Benefit to Eating Weed Rather Than Smoking It

What if society treated consuming marijuana the same way we treat caffeine? Instead of starting off your Sunday morning with a cup of coffee, you'd pour a steamy weed-infused drink. Maybe when you're taking a walk through the park, that latte in your hand actually has a small dose of cannabis in it.

Chef Michael Cirino, who has a background in molecular gastronomy and food science, believes weed edibles will eventually transform our leisure time — if we can solve one big problem.

If you've ever tried weed edibles before, you know that getting the wrong dosage is an all-too-common issue. Often, you take too much or too little; a slightly too-big bite of chocolate can put you under the table.

Cirino believes that by combining his cooking with scientific research, "we can self-dose ourselves like we do with caffeine," he said during a cooking demonstration April 6 at the Brooklyn Kitchen in New York.

Read more: High-End Edibles by Renowned Chefs Are the Next Big Thing in Weed

There's a unique benefit to eating, rather than smoking, marijuana. When the psychoactive chemical tetrahydrocannabinol, known as THC, is metabolized in the liver, it turns into 11-hydroxy-THC, which is supposedly more psychoactive. This gives weed edibles a demonstrably "different" high — longer, steadier, but not necessarily more intense.

Cirino's goal is to let people dose themselves to enjoy a steady high for a long period of time, as opposed to smoking a joint, whose high spikes and then falls away.

This is the reason why many people who use marijuana medically prefer to eat it, according to the Daily Beast.

But cooking with marijuana is intimidating — it's even produced a few horror stories. But proper knowledge of decarboxylation, or heating up the marijuana plant to activate its psychoactive delta 9-THC, can make it a more widely embraced practice.

Decarboxylation can be done in an oven, pressure cooker or stovetop double boiler, according to Cirino. Then you can infuse the cannabinoids into a fat like butter or oil.

So where to start? Below is a cannabis butter recipe from Cirino, which can be used for just about anything.

With the right measurements, you can achieve a dependable high that won't put you over the edge. Enjoy!