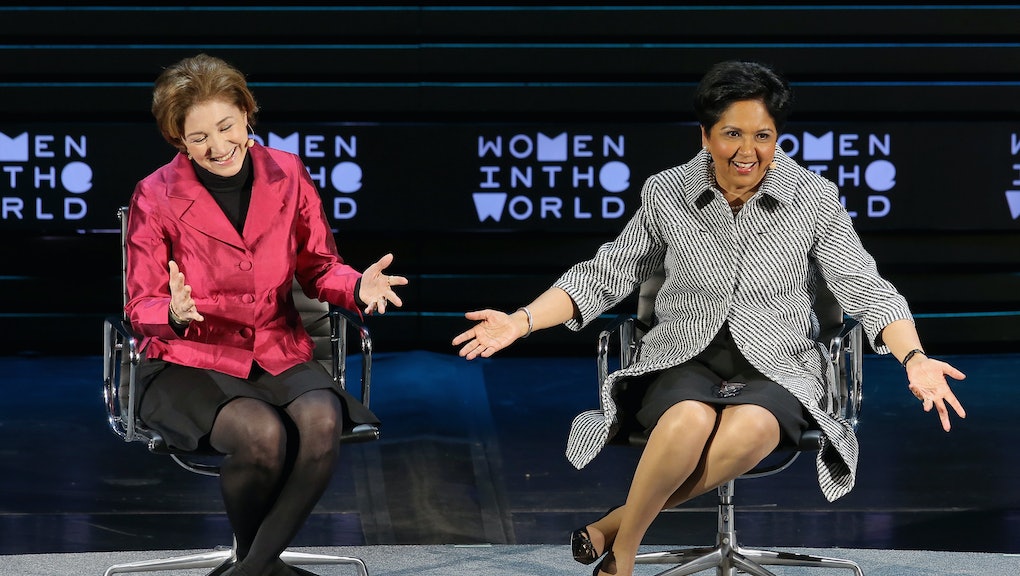 Women in the workplace have come a long way since the Mad Men era. But that doesn't mean that sexism is totally absent from office culture — in fact, far from it, as recently noted by PepsiCo CEO Indra Nooyi.

In a recent talk at Tina Brown's Women in the World Summit, Nooyi said that even though she's the CEO of one of the biggest companies in the world, she still has to deal with coworkers referring to her by condescending pet names.

"We still have to have equal treatment. I mean, I hate being called 'sweetie' or 'honey' at times, which I'm still being called. So all that's got to go," Nooyi said. "We've got to be treated as executives or people rather than 'honey' or 'sweetie' or 'babe.'"

The fact that even badass businesswomen like Nooyi, who doubled the company's profits while simultaneously juggling key leadership roles at half a dozen global organizations, has to deal with colleagues disrespecting her is indicative of a much larger issue.

The way we talk at the office can have serious consequences. A recent study by the University of Melbourne found that constant exposure to subtle sexist language had roughly the same negative impact on female employees as less frequent forms of workplace sexism like harassment and assault.

It's 2016 and there are still only 21 women leading a Fortune 500 company. Being a little more respectful when we talk to women in the workplace (and especially female leaders like Nooyi) is just one small, tangible step we all can take toward making the workplace a more equal environment for everyone.