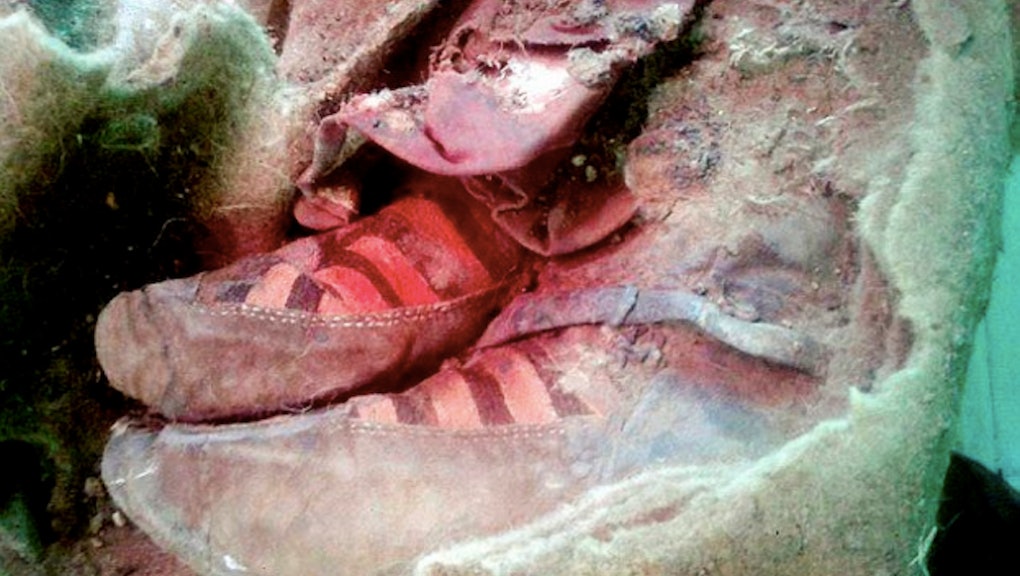 Mummy, we've got one question for you: What are thoooooose?!

They look a lot like Adidas. On your feet. But how could that even be possible, considering you've been dead for 1,500 years? Uh oh — looks like we have a scientific mystery on our hands.

Read more: The Bigfoot Mystery May Actually Be Explained by This Extinct Creature

And it's one for the ages: A mummy recently unearthed in Mongolia was apparently buried in boots that look very much like Adidas Superstars. Among the other objects found in its tomb were various vessels, traditional Mongolian clothing, pillows, a saddle, the body of a horse and a sheep's carcass carved into bits — a.k.a. your run-of-the-mill burial rider. The mummy is believed to be the (remarkably well preserved) body of a commoner, most likely a woman.

"It is the first complete Turkik burial at least in Mongolia  — and probably in all Central Asia," B. Sukhbaatar, a researcher from the Khovd Museum who's examining the mummy, said, according to the Siberian Times . "This is a very rare phenomenon."

It's not the rare phenomenon that interests the internet, though. The internet is more interested in the mummy's footwear, taking it — maybe facetiously, maybe not — as evidence that time travel is possible.

Because as far as science knows, time travel is not possible. In order to have landed back in her grave with fresh kicks from the future on her feet, this mummy would have to have travelled faster than light, which she didn't, because no one can, no matter how spectacular their sneakers.