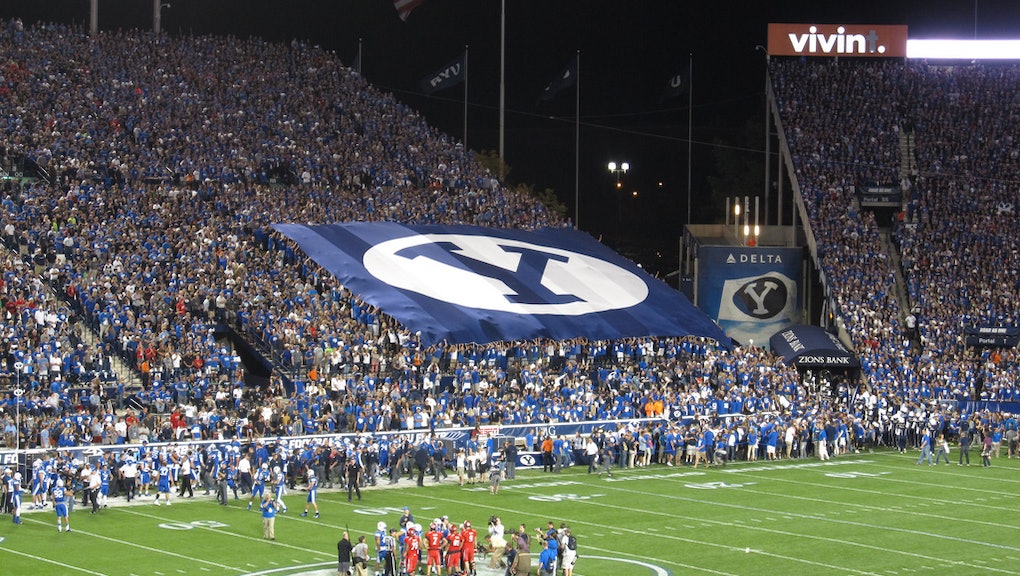 Brigham Young University Is Blaming Survivors for Being Sexually Assaulted

Thanks to the efforts of everyone from student activists to Vice President Joe Biden, people are slowly starting to acknowledge that rape on college campuses is an enormous problem. At Brigham Young University, however, that doesn't seem to be the case. Students at the university claim they've been investigated — and, in some cases, disciplined — for violating the school's code of conduct after filing reports of sexual assault, the Salt Lake Tribune reported.

In interviews with Mic and the Salt Lake Tribune, students have said the school's associate dean of students and Title IX coordinator, Sarah Westerberg, refers all reports of rape to BYU's Honor Code office, which enforces campus-wide behavioral standards set by the Church of Jesus Christ of Latter-day Saints. According to student reports, the Honor Code office has allegedly taken punitive action against rape victims for breaking school rules, effectively blaming them for "causing" their own assaults by violating the code of conduct.

During a BYU rape awareness event last week, Westerberg defended the school's right to investigate survivors, the Tribune reported, stating her office would "not apologize" for facilitating Honor Code investigations. She was prompted by BYU student Madi Barney, a survivor who is currently under investigation by the Honor Code office after filing an assault claim.

"I said, 'I'd like to propose that victims of sexual violence have some kind of immunity clause from the Honor Code, because it creates a hostile environment for victims who think they're going to get in trouble for reporting,'" Barney told the Tribune. "In a room full of rape survivors, [Westerberg] said, 'We do not apologize for this.'" (Westerberg did not respond to a request for comment.)

School officials, however, have denied that sexual assault reports are referred to the Honor Code office. In an email to Mic, BYU spokeswoman Carri Jenkins said the processes of investigating a Title IX claim and a potential code of conduct violation are "independent and separate."

According to Madeline MacDonald, a BYU sophomore, that didn't seem to be the case when she reported her sexual assault to Westerberg in 2014, and was subsequently investigated by the Honor Code office. Instead, she said in a phone interview with Mic on Wednesday, school officials seemed much more concerned with safeguarding the reputation of the institution, which has previously been accused of underreporting campus assault.

"BYU is very good at [portraying] that nothing ever happens to its students," MacDonald said. "You just have to be smart and not drink and everything's fine. The idea that people can be living normal lives and not being doing anything crazy — not 'asking for it' — and still have this happen to them, is terrifying. It makes people feel unsafe. So it's a lot easier to discount a couple of survivors than it is to be supportive."

"BYU is very good at [portraying] that nothing ever happens to its students."

MacDonald said she decided to contact the Title IX office in order to take advantage of the university's counseling mental health services, which required her to notify the school of her assault. She was not aware when she filed her report that Westerberg would also contact BYU's Honor Code office, or that she might be investigated.

After nothing but "radio silence" from the Title IX office, MacDonald received a lengthy, dense notice from the school detailing the administration's next steps. Buried deep in the letter was a note that her case had been reported to the Honor Code office for evaluation.

"Nowhere does it say you're not allowed to be present when the Honor Code counselors discuss your case," MacDonald said. "They didn't let me attend. They said, 'It's not against our policy, but it's against our tradition.'"

MacDonald was eventually found to have been in good Honor Code standing at the time of her assault, and the incident did not result in any additional action from BYU's administration. For other survivors, however, that hasn't been the case: One victim told the Tribune she was unexpectedly expelled from the university after reporting her rape, because she had taken drugs the night of the attack; she will not be allowed to reapply for two years.

For MacDonald, her experience dealing with the Title IX and Honor Code offices has made it difficult for her to feel completely comfortable at BYU, a place where she says survivors' experiences are often kept secret and solidarity for rape survivors is in short supply. Before connecting with other survivors during the recent rape awareness events, she spent months believing she was "the only one" who had reported an assault to the school and been disappointed — which is precisely why she's decided to stay at BYU.

"I definitely considered leaving, but ... I'd lose my voice in the discussion about BYU, and be unable to enact change," she said of her decision to stay. "As a current student my story carries a lot more weight than if I were to leave. I also want to be here as a resource to other girls, because now that I've been through the process I have an ironclad knowledge of how BYU works and how reporting goes. I want to help others through that."