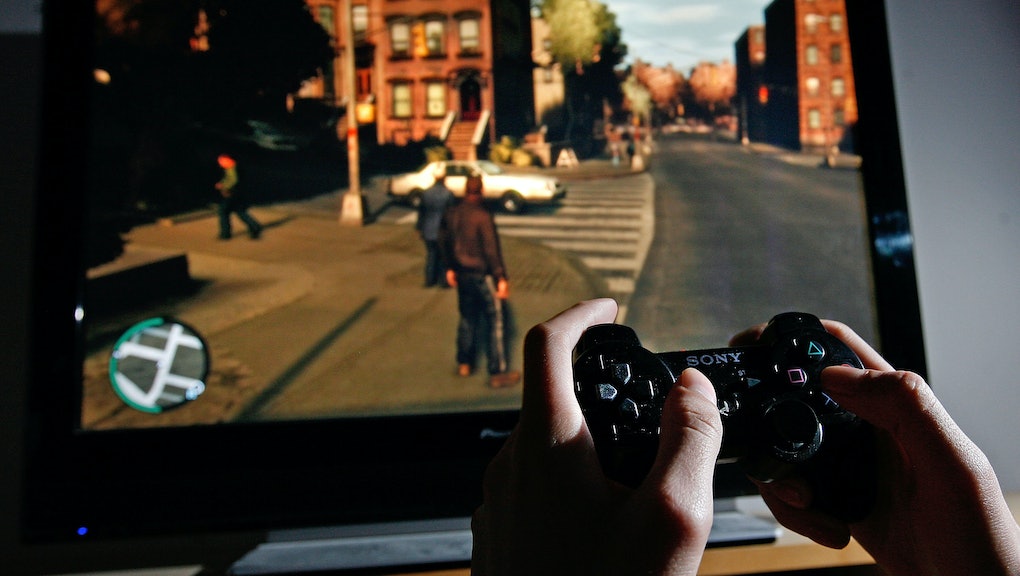 Researchers have shown that Grand Theft Auto, a game that rewards male characters for murdering prostitutes, may produce a lack of empathy among young men who play it.

According to a study out of Ohio State University, playing "violent-sexist" video games like GTA caused men to exhibit less empathy toward women who were victims of violence.

To conduct their study, researchers randomly assigned video games to 154 Italian high school students. The games featured varying degrees of violence and sexual content: GTA San Andreas and GTA Vice City had both; Half Life 1 and Half Life 2 had violence but no sexual content; Dream Pinball 3D and Q.U.B.E. 2 had neither.

Following gameplay, the researchers showed each student a photo of a young girl who'd been physically beaten by a young boy, and asked if they felt sympathetic, moved, compassionate, tender, warm, softhearted, disregarded or indifferent.

The results: Men who played the violent-sexist GTA games reported lower levels of empathy than those who were assigned the other games.

"With these GTA games, you are putting yourself in the shoes of the perpetrator, not the victim," Brad Bushman, the study's co-author, said in a phone call Wednesday.

"Playing these games caused men who identify with the violent male characters to believe that men are tough. Men are violent. Men are aggressive," he said.

When men identify with the male characters in violent and sexist video games, they may also believe it's OK to coerce women into having sex, according to Bushman. In GTA games, a male character can pay a prostitute for sex and then, to get his money back, kill her. Women, often clad in bikinis, are treated like sex objects; men, wielding big-ass guns, are rewarded for violence and objectification.

These most recent findings suggest video games have some effect on our attitudes toward violence — and in this case, violence against women.

"You may think the games are just harmless fun," Bushman said in a statement. "But when boys play them and identify with the male characters in the game, it can lead to agreement with some pretty disturbing beliefs about masculinity and how to treat women."

Empathy matters: Having empathy makes us more likely to help people. A study by the National Center for Biotechnology Information reveals that empathy results in prosocial behavior.

What needs to change: "Games have traditionally done a terrible job of representing women, often relegating them to lesser positions or sex symbols," Kill Screen founder Jamin Warren told Mic in an email.

Video game violence is acceptable in certain contexts, Warren said — like when it's "in the service of something grander."

"That said, I'm hard-pressed to think of examples of games that have done that in a meaningful way," he added. "The broader issue is that there's still a large disparity in female characters that needs to be addressed before we can really start looking at something as complex as this in a meaningful way."