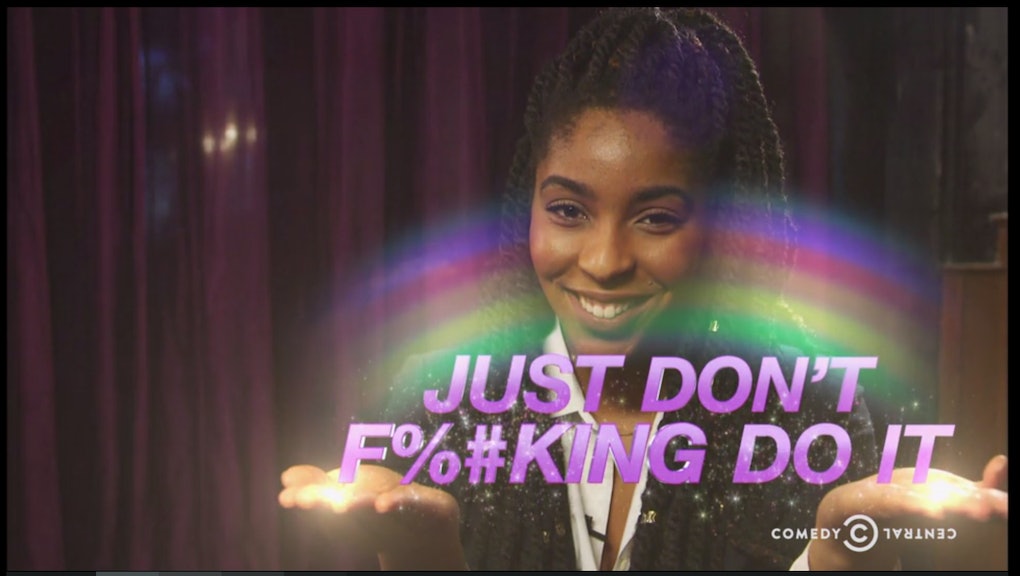 While not everyone is as open about their sexual preferences as John Mayer, who called his penis a "white supremacist" in 2010, the underlying idea behind the racial preference he stated has a name: sexual racism. Seeing it in action, though, is another thing entirely.

For the bit — in established Daily Show style — Williams and Chieng deliver with a sarcastic tone, initially suggesting sexual racism is a farcical notion. However, it didn't take long for them to change their tune.

"We found that 82% of nonblack men have some bias against black women," Rudder says, as Chieng jokingly laughs at Williams, before Rudder turns to him. "And Asian men get the fewest messages and the worst ratings of any group of guys."

To add insult to injury, Williams created dating profiles for Chieng on several popular apps, and he didn't receive any matches on Tinder in the eight-day experiment (even though she swiped right for him incessantly).

Unfortunately, when speaking to a panel of people who faced dating troubles, they found similarly disheartening anecdotes. A black woman says one of her first Tinder messages she received told her that almost 90% of black women have herpes (which is greatly exaggerated), and an Asian man says he saw one profile that read, "No Chinese guys, because Chinese guys have small dicks."

Worst of all, one woman says she is repeatedly asked "What are you?" which prompts a swift response from Williams, directed at the camera. "Hey guys, it's TV's Jessica Williams. If you ever feel the need to ask 'What are you?' do me a favor and just don't fucking do it."

Ultimately, the participants speaking with Williams and Chieng wanted to impart some pieces of advice to potential dating matches. They're pretty simple, like don't start out with stereotypes and don't bring up race from the get-go.

However, after everything the Daily Show correspondents went through, their conclusion, sadly, rings true.

"So treat people like individuals?" Williams posits, to a chorus of nods. "I don't think that's ever going to work."