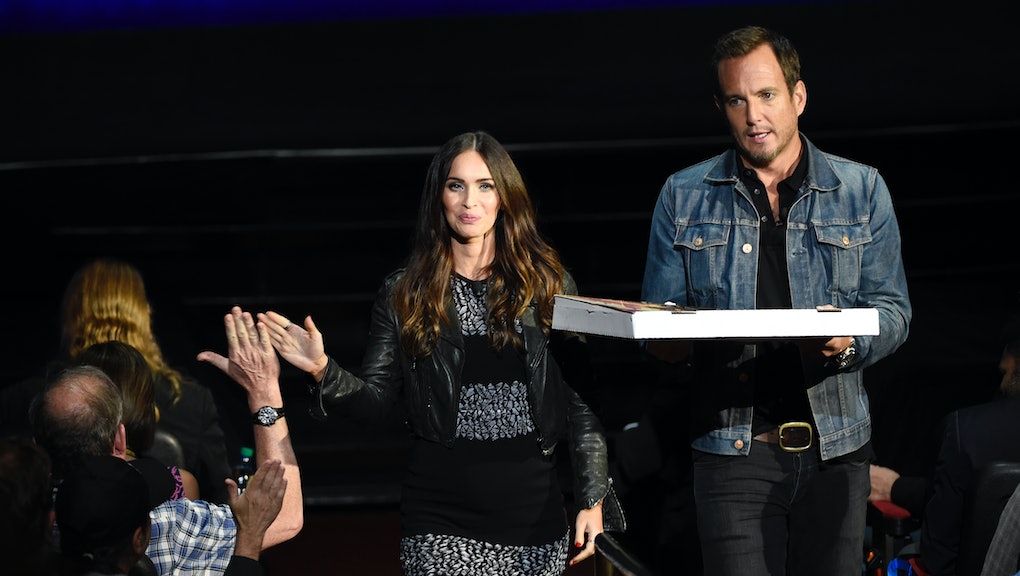 Megan Fox's Baby's Father Is None of Your Business, Internet

When Megan Fox walked the red carpet at Las Vegas' CinemaCon on Monday night, she did so with a baby bump, which — in case you didn't know — is an unspoken invitation for strangers to begin speculating wildly about her private life. And boy did they ever. Because she failed to address the paternity issue directly, people who have zero stake in the matter did that for her.

Read more: The One Thing Everyone's Getting Wrong When They Ask Women if They Want Kids

"We don't know who the dad is," Nikki Hendry at TMZ explained. "As you guys recall, they [Fox and her husband, Brian Austin Green] filed for divorce back in august, and their divorce is still pending, but now she's pregnant with possibly their third child?"

Green is, allegedly, the father — as an all-too-eager source told People, "Of course Brian is the dad! They never stopped loving each other and they will never stop being devoted parents to their two boys." The couple already has two kids. The fact that they're proceeding with the split, even with another on the way, has naturally elicited unasked for moralism from some.

Fox is a public person, so some might argue that what she does publicly — like, for example, leaving the confines of her home to do her job, or being amongst other humans — is up for discussion for anyone with eyes. And true, no one can stop people from guessing. Speech is free. Which is why female celebrities are always hounded when they get pregnant but attempt to reserve some privacy for themselves and their families.

January Jones, Mad Men actress and single mother, had to deal with this shit when she made the conscious decision not to name the father of son Xander in 2011. She kept the paternity a secret because she "didn't want him involved," which pretty clearly signals that the subject is closed. Or should be. In this case, the rumor mill began to turn, linking Jones to any number of the men she had recently been around, largely in a professional context.

Fox apparently anticipated this reaction, posting an Instagram of herself posing with various male costars past and captioning the collage shot, #NotTheFather. Smooth move, @the_native_tiger. And yet her deliberate avoidance of naming the man deterred no one. Her baby bump met the media on Monday night. People's article naming the father ran Tuesday morning. A thing she was purposefully keeping private was immediately blown open.

When Minnie Driver gave birth to her son Henry in 2008, she tightly guarded the father's identity. In 2012, she threw out a few more details but still refused to name him explicitly. "He's not famous," she said. "There's no big story." But even those words were treated as quite a big story by news sources that cover pop culture. The real question is, why do we care so much?

Nearly 10 million families in the U.S. are single-mother families, which are more likely to live below the poverty line. However, they're not guaranteed to, and Fox's financial standing is such that we can rest easy about her unborn child's fiscal well-being. It doesn't seem to be about that, though.

The crux of popular curiosity, in Fox's case, seems now to center on whether or not she'll proceed with her divorce. Thus far, it looks to be full steam ahead — and that's perfectly fine. Because two unhappy parents are not better than one happy mom. And even if two were better than one, there's no reason to assume that Green's not going to be involved.

The only thing happening here is Fox making a choice to have a child outside of marriage. That's in no way unusual these days. If being a single mom is what she feels is best — if that's what Jones and what Driver felt was best — then great. They should do them. Because when women have kids, if they even have them, is nobody's business but their own. (And the fathers' or the other parents', if they're around.) If Fox isn't talking, then we shouldn't keep asking. She has as much right to privacy as anyone else.