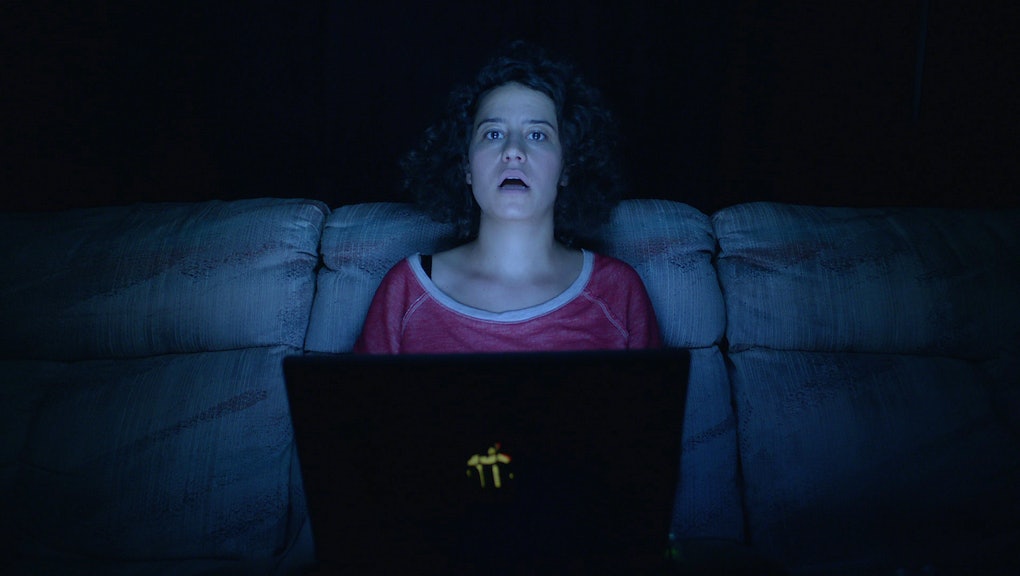 What Do You Wear to Work When No One Sees You Working?

Most of us have an on-the-job uniform of some kind, whether it's a shirt and tie, a skirt and blouse or whatever floral disaster you rock on Hawaiian Shirt Day. But what would you wear if your job required no in-person interaction?

Would you do it up?

Or keep it casual?

And what if you take this idea a step further — like if you work as a podcaster, or in radio? What duds should you don if you, like Marc Maron, have an intimate audience of hundreds of thousands, but they have absolutely no idea what you look like or what you've got on? (Point of fact: Maron makes his money in his garage next to his trash cans.)

Would you brush your teeth, or run a comb through your hair? Would you even get dressed at all?

Read more: What It's Really Like to Get Dressed for Work When You're Gender Nonconforming

It's no secret that expectations for the majority of workplace-wardrobes are more lax now than they were in the last century. According to a Gallup Poll from 2007, "business casual" is increasingly what most Americans say they wear to work — followed by "street clothes" (e.g., jeans) and uniforms. And that was almost ten years ago.

Along with this collective (and figurative) loosening of our ties, another trend has emerged: According to the U.S. Census, the number of Americans who work from home increased by 4.2 million from 1997 to 2010.

Dressing up ... for your eyes only

Does that mean pajamas are out for those working from home? Not necessarily.

"When people mock writers who work from home for 'wearing pajamas,' they're operating from the assumption that pajamas are basically anything you can sleep in," Esquire writer Joe Keohane said via email. "But a good pair of pajamas actually dignifies the thing. They show effort. They look good. I wear them everyday."

So yes, you can wear your jammies on the daily. Yet even the productively pajama-clad need to feel fresh. "If I laid around my place all day looking like a bag of shit, wearing sweatpants and a T-shirt or something, I'd start feeling like a bag of shit," Keohane said. "And the sense that you might be turning into a bag of shit is one of the demons you have to slay in order to work from home with any measure of success."

So what does Keohane wear? "Two pieces, button-down, lapels. I have two pairs. Gray flannel ones for the winter, light blue cotton ones for warmer weather. I wear them every day."

Why it's important to dress up, even if for no one but yourself

Last year, a study at Columbia University found that dressing well correlates with working well — or at least thinking well.

In addition, according to Harvard biologist Christoph Randler, people who reach their peak productivity in the morning are more proactive in general, and thus better positioned for career success.

Audie Cornish of NPR's All Things Considered argues that part of this comes from establishing a ritual, and that she discovered the formality of work clothes helps her maintain focus.

"I used to work from home with my husband and we would get dressed up together," Cornish said in a phone interview. "I needed the ritual to prevent myself from slipping into disabling levels of procrastination. I don't feel like I'm at work unless I'm dressed for work."

The advantage of working out of sight

Here's the chief thing to consider: the effect that the clothes you wear have on you personally.

When you try to look presentable for work, you'll inevitably consider (or at least be influenced by) the expectations of other people you're going to see that day. But working from home allows you to dress in a way that makes you feel most productive, regardless of what anyone else thinks. And you'd be a fool to not capitalize on that freedom.

When asked if anyone he works with at NPR takes advantage of working as a radio broadcaster, and maybe dresses a bit too comfortably, Shapiro was coy: "No comment," he said.

Whether you're a radio broadcaster or you work from home, there's a unifying theme here: Regardless of who is going to see you, putting some thought into what you wear is worthwhile, even (or especially) if it's pajamas.

"If you need sit on the toilet with a rubber ducky taped to your forehead and a lit cigarette stuck up your ass, do that," Keohane suggested. "We're all snowflakes in this miserable racket."

While it's true that you can wear whatever you want when your job enables you to be incognito, that doesn't mean what you wear doesn't matter. After all, your preparedness and productivity is in direct correlation to the clothes on (or off) your back.

"If I may, I'd like to quote RuPaul, who I believe said: 'We're all born naked, and then the rest is just drag,'" added Shapiro. A quote to live by.