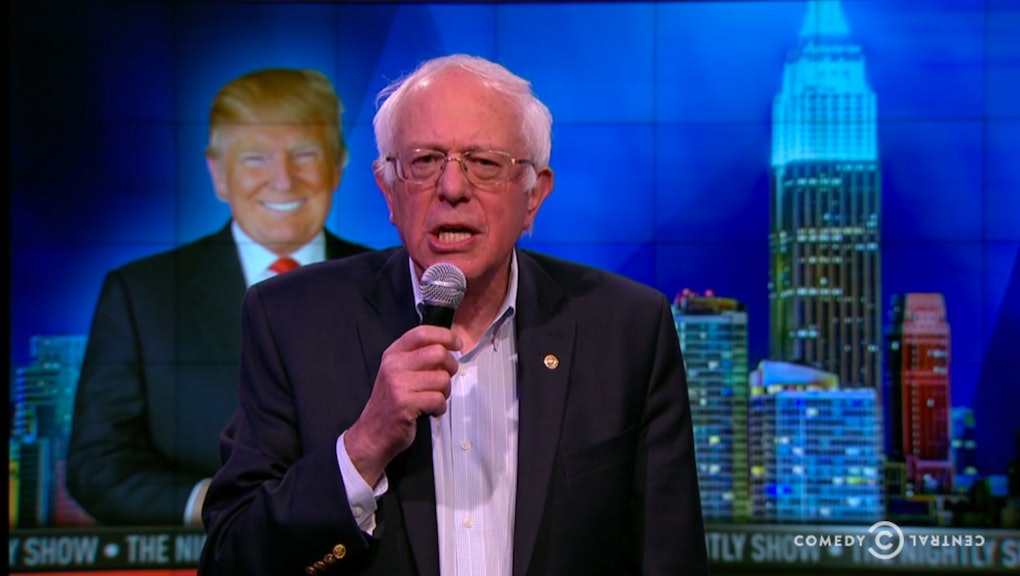 Bernie Sanders Blasts Donald Trump, Says He Has No “New York Values” On ‘The Nightly Show’

With the New York primaries just around the corner, an oft-cited remark from Texas Sen. Ted Cruz has thrust itself back in the spotlight. In January, Cruz blasted GOP frontrunner Donald Trump for having what he called "New York values," putting a negative connotation on what is primarily a socially liberal, pro-abortion and pro-gay marriage city.

Now, another New Yorker had a chance to comment on Cruz's sentiments, and pointed out why these values don't apply to Trump. Appearing Wednesday on The Nightly Show, Vermont Sen. Bernie Sanders vented his frustration with host Larry Wilmore, explaining what his definition of New York values are.

"That's right, it's me, Bernie 'Brooklyn-born' Sanders, and guess what, Ted Cruz, I have New York values," Sanders says as he addressed the camera. "I value a living wage for all Americans, I value a justice system that treats everyone fairly, I value a government which works for all of us, not just Wall Street and powerful special interests — those are New York values. And when you say having New York values is a bad thing, you insult my city, my state, my culture and my heritage. I am the son of an immigrant and I'm proud of it."

Sanders went on to point out that, while Trump resides in the city, he does not share the same values as the common New Yorker — citing the candidate's divisive policies, such as wanting to build a wall at the border of Mexico. "Mr. Trump, you wouldn't know New York values if they were written in 50-foot gold letters on the side of the Empire State Building," he said. "New York values are the Statue of Liberty, not a wall between us and Mexico. In New York, we pride ourselves on our diversity; we don't divide people up based on where they were born."

Sanders had one final point to make after a few good Berns — rallying the sentiment that Americans as a whole share these important characteristics. "New York values are American values — there is no difference." Then, he promptly dropped the mic, which was met with thunderous applause from audience members — and not just those in the studio.

Check out Sanders' New York values takedown on The Nightly Show here. Sanders also had a proper sit down with the host later in the show, where he talked about his competition electoral race with Hillary Clinton — which you can check out here.

Read more: "F**K U O'Reilly": Larry Wilmore Has a Brilliant Response to the Host's Racist Tirade