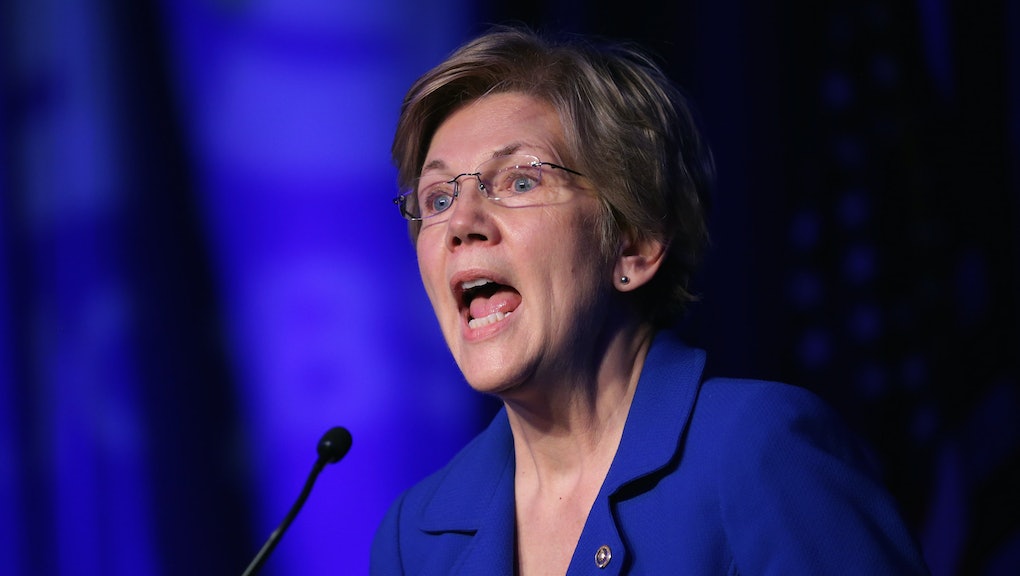 Elizabeth Warren is at it again.

After Bloomberg News reported on Wednesday that five of the biggest banks in the nation failed a major test of whether they could undergo bankruptcy without having a disruptive effect on the entire financial system, the senator from Massachusetts is once again sounding the alarm about the scourge of too-big-to-fail banks.

The Federal Reserve and the Federal Deposit Insurance Corp. said that the banks' "living wills" — or blueprints for how they would go about shutting themselves down if driven to bankruptcy — didn't meet their standards for preventing another crisis of the kind that wrecked the financial sector and helped trigger a global recession after the collapse of Lehman Brothers in 2008.

Warren took to Facebook to remind the public of the gravity of the news, and to lambast politicians and economists who have argued that cutting down the size of major banks shouldn't be a priority when it comes to reining in the financial sector.

"This announcement is a very big deal. It's scary. And it means that, unless these banks promptly address the concerns identified by the regulators, the government must push these banks to get smaller and less complex," Warren wrote.

Warren's post took aim at people who have downplayed the importance of size in determining the best way to prevent another financial crisis, at one point talking of "revisionist history" that seems to be, as the Huffington Post's Zach Carter pointed out, a subtle swipe at liberal economist Paul Krugman.

"There's been a lot of revisionist history floating around lately that the Too Big to Fail banks weren't really responsible for the financial crisis. That talk isn't new. Wall Street lobbyists have tried to deflect blame for years. But the claim is absolutely untrue," Warren wrote.

The firebrand senator explained how the size of the banks was inextricable from the risk they posed to the economy during the financial crisis.

"There would have been no crisis without these giant banks. They encouraged reckless mortgage lending both by gobbling up an endless stream of mortgages to securitize and by funding the slimy subprime lenders who peddled their miserable products to millions of American families," Warren wrote. "The giant banks spread that risk throughout the financial system by misleading investors about the quality of the mortgages in the securities they were offering."

Warren has refrained from making any endorsements in the presidential race this year, and while she's praised elements of both Hillary Clinton and Bernie Sanders' Wall Street reform proposals, her zeal for breaking up the big banks makes it clear that on the issue of breaking up the banks, she's in Sanders' corner.