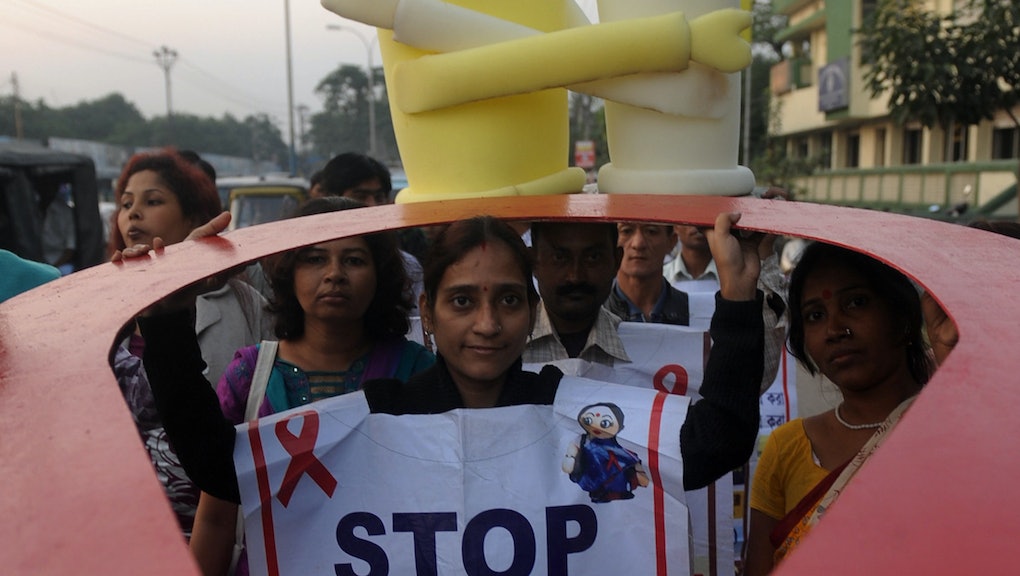 Teenage boys don't know anywhere near as much about sex as they think they do. (Shocking, we know.) It's not entirely their fault: American high schoolers are taught way too little about condoms and safe sex, which is probably why they have inordinately high rates of unintended pregnancy and sexually transmitted infections.

According to a recent survey by Cosmopolitan and the National Campaign to End Teen and Unplanned Pregnancy, which polled more than 1,200 men between the ages of 20 and 39, more than a quarter of young men believed wearing two condoms was more effective than wearing one. (Obviously, this is the opposite of true.) Furthermore, almost one in four men claimed they had heard of the "contraceptive cone," a pregnancy prevention method that the survey creators made up.

A new report from the Guttmacher Institute released earlier this week explains why so many grown men harbor such laughable beliefs: no one ever bothered to teach them about safe sex to begin with. The study found that the proportion of young men between the ages of 15 and 19 who received formal education about birth control has declined significantly since 2006. Just over half of teen boys learned about contraception at school or some other formal setting by 2013, down from 61% seven years earlier. Additionally, between 2011 and 2013, 57% of adolescent males didn't receive any information about birth control before they first had sex.

The decline for teen boys corresponds with a similar drop in the number of young women who learned about contraception at school, which went from 70% to 60% over the same period. And despite conservative arguments that we'd all be better off if sex ed were taught at home, the study found that one in five teen girls and one in three young boys did not learn about different birth control methods from their parents. Apparently, teens don't want to talk to their parents about sex! Who knew?

Tempting as it might be to laugh at dudes who claim to know all about pregnancy-preventing cones, the findings are troubling in more ways than one. Research has shown that STI prevention is far more effective when men are more involved in contraceptive use, which essentially means infection rates could go down significant if men knew more about birth control. And apparently, they're interested in learning: 49% of men in the Cosmo poll said they'd like to know more about birth control.

At the very least, young men seem to be aware that there are gaps in their knowledge when it comes to sex education. The best way to fill in these gaps? The solution is clear: Teach men what they need to know while they're still boys.