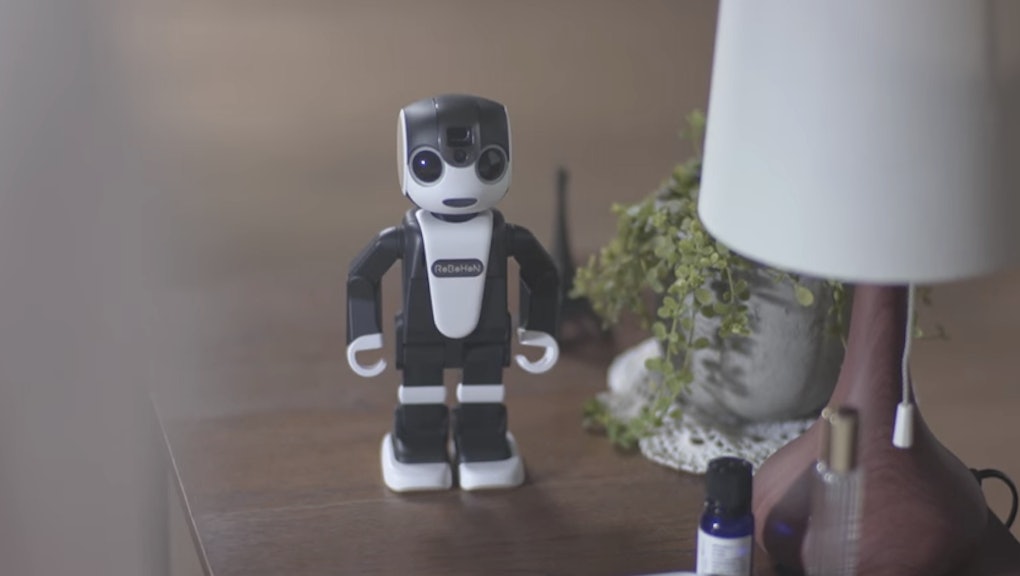 Sharp's RoboHon is a tiny robot slash smartphone slash home theater slash future apple of your eye. It's a portable 19.5 centimeters (about 8 inches) — miniature enough to bring on the go but still a bit too unwieldy to stick in your pocket — with a joyful roboface on the front and 2-inch screen on the back. The robo-phone is now available for preorder and will release in Japan on May 26, according to a news release.

Based on the promotional video, Sharp hopes you will adopt this humanoid into nearly every facet of your life. It'll send you messages at the office. It'll show you a movie while you're lounging at home thanks to the tiny projector in its head. It'll snap selfies of you. It'll dance for you. It'll wish you goodnight before bed. It'll break your goddamn heart. Basically, it can do anything your phone can do, plus a whole lot more, packed into a cute little bod.

The catch? It comes at a steep price of $1,800. While this is more than double the full retail cost of a new iPhone, it's just a bit more than you might spend if you purchased both a phone and a social robot.

If you were toying around with the idea of a buying a home robot like Jibo (which costs $599 for the developer edition) and wouldn't mind kissing your shiny phone goodbye, Sharp's RoboHon may actually point to a future where we combine the two machines.

If we are headed toward a future where social robots become mainstream, buying one that also doubles as a phone could streamline your daily machine usage. We're not there (yet?), but if and when household robots are commonplace, the price tag may be easier to swallow.

One caveat: No matter how small the robot is, you're going to look like an idiot answering calls on this thing.