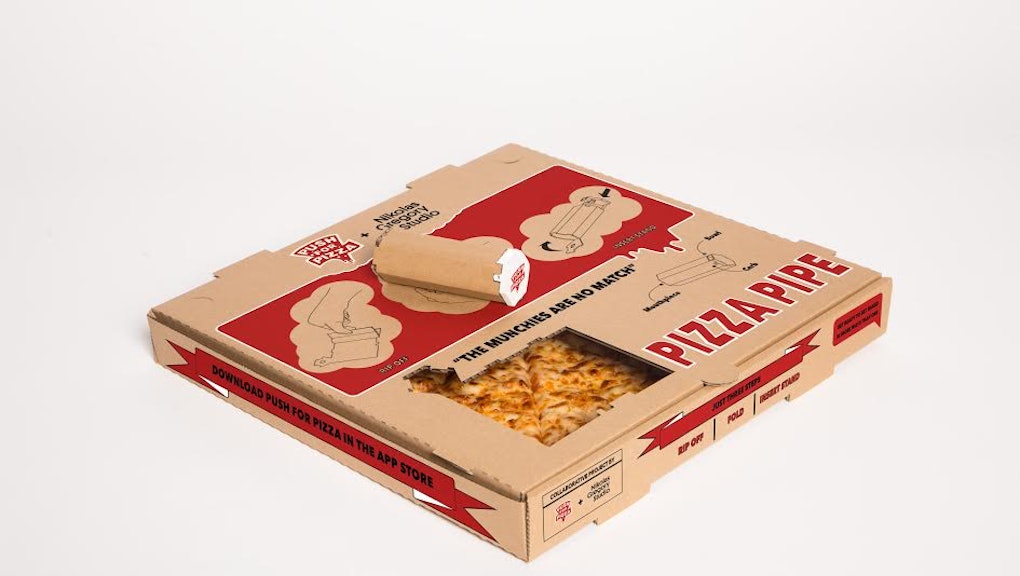 This Pizza Box Turns Into a Pipe, Is Your Munchies Dream Come True

Some may say it's about time.

A company has finally married together two great things, pizza and marijuana, into a matrimony obviously called the "Pizza Pipe."

"The 'Pizza Pipe' is an all-in-one product with value to the user both before and after the fact," according to a press release by the company behind the munchies dream come true Push for Pizza. The company's innovations in stoner conveniences started with its app, which orders you pizza at the literal push of a button.

"No longer will one have to search for a pipe before or struggle to remember the telephone number of the pizza parlor after its use," stated the press release.

The copyrighted concept consists of a normal-looking cardboard pizza box, besides that it has a cutout that can be folded into a pipe for smoking. The stand that holds the box up works as the pipe's bowl, and also has a carb "for better ventilation," according to the press release.

The stand is made out of white ceramic so it won't burn when lit, and, of course, the rest is one, big recyclable pizza party.

Don't get too excited though, Push for Pizza currently has no plans to move the "Pizza Pipe" into mass production.

And if the company does do a limited run, it says it will use recyclable plastic which is probably not the best thing to light on fire and inhale. So perhaps enjoy the novelty idea from afar — your glass bowl will still do the trick.