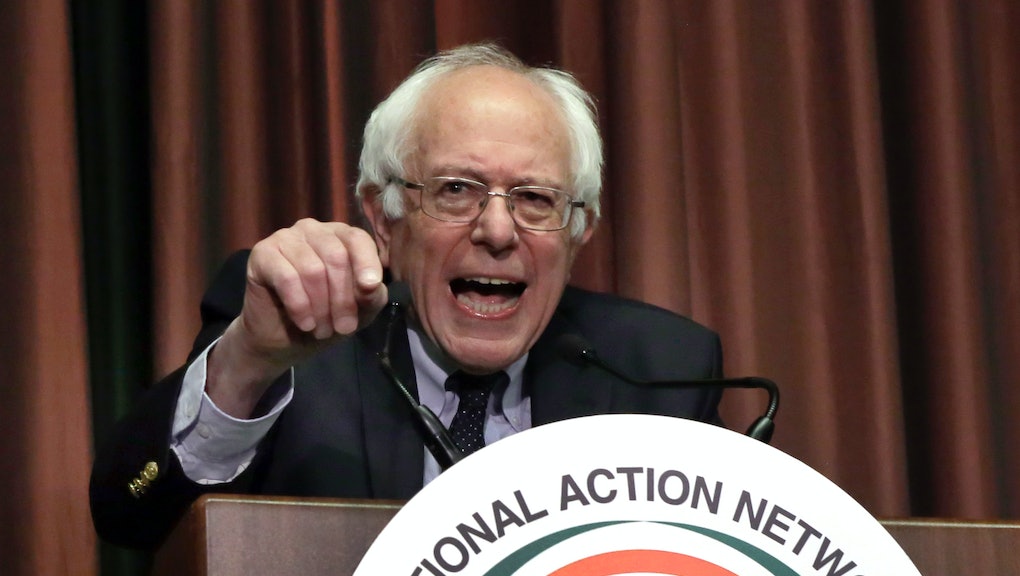 When Sen. Bernie Sanders of Vermont spoke at the National Action Network's annual convention on Thursday, he failed to draw a crowd as large as the one his rival Hillary Clinton did the day before, but the ones who showed up appeared significantly more exhilarated by his message.

The Vermont senator's speech was on the second day of a conference that's been dubbed "the Sharpton primary." The yearly gathering of the National Action Network, which was founded by Rev. Al Sharpton a quarter century ago, has developed into a major opportunity for Democratic presidential candidates to court black civil rights activists who hail from across the country.

Sanders' pitch to them began with a fiery sermon on the injustice of voter suppression sweeping across the country. Citing the rapid spread of restrictive voter ID laws across the states, the firebrand senator warned that Republicans were leading a cynical assault on one of America's most cherished rights.

"You would've thought that after all we have gone through as a country to make sure that people have the right to vote, regardless of the color of their skin, that these Republican governors would show some mercy and not try to bring us back to Jim Crow days," Sanders said.

Much of what Sanders discussed sounded reminiscent of what Clinton had proposed during her speech on the exact same stage the day before. Like Clinton, he talked extensively about criminal justice reform and changing policing practices; he promised to make sure that water supply crises like the one that devastated Flint, Michigan, never happen again; he pledged to invest billions in jobs programs for disadvantaged youth; he pointed to the scarcity of affordable housing as an urgent social problem.

But he also sounded rather different from Clinton in his ambition to situate his commitment to people of color within a broader critique of establishment politics — one that spoke to his social democratic values. During the part of his speech in which he talked about Republicans' disenfranchising vulnerable communities through voter ID laws, he connected it to the ability of corporations to sway elections in the wake of the Supreme Court's 2010 Citizens United ruling. When he discussed his disgust with the state of social spending on behalf of the poorest Americans, he tied it to America's addiction to war.

Sanders' goal was to remind his audience that King wasn't just an advocate for racial equality, but also a socialist.

"How does it happen when we have trillions of dollars available to spend on a war in Iraq that we never should have gotten into, but then we're told we don't have the funds available to rebuild inner cities in America?" Sanders boomed.

Sanders' effort to place the discussion of racial justice within the context of a larger critique of American capitalism was most provocative when he invoked the legacy of Martin Luther King, Jr. When discussing the civil rights icon's most famous piece of oratory, Sanders said, "I want everybody to remember what I know you all know — the name of that march was not just the march on Washington, it was the march on Washington for jobs and freedom." He went on to paraphrase King's reflection on the interconnectedness of racial oppression and poverty: "[King] said what does it matter if you desegregate a lunch counter, but you don't have the money to buy a damn hamburger?"

Sanders' goal was to remind his audience that King wasn't just an advocate for racial equality, but also a committed socialist.

How did it play?: Sanders' speech was well-received. While the lines to see him were a fraction of the length that formed before Clinton's event, the seats did eventually fill up entirely and most of the audience responded enthusiastically to his speech.

"I was impressed to hear his plans on tackling the issue in Flint with rebuilding," Endura Govan, the director of an educational nonprofit from Washington, D.C., said in an interview after the speech. "I'm still undecided, but I'm leaning toward Bernie; I feel that Hillary kind of expects the black vote, and has sort of taken it for granted."

But even if Sanders managed to convert a number of audience members to his campaign, the issue of shorter lines isn't trivial.

Rev. Jesse Jackson Sr., who was attending the conference on Thursday, said in an interview that Clinton's greatest strength lies in the way she's built connections with the black community and political class through advocacy and the hard work of relationship-building.

"Hillary Clinton played to her strengths, her strength with this group is relationships over a long period of time — what one would call retail politics," Jackson said in an interview. "Bernie has a solid civil rights instinct, but he does not have the retail relationships she has."

Jackson's analysis is a reminder of the way that Sanders' campaign would likely have benefited from making a stronger, more explicit and more nuanced pitch to voters of color much earlier during his campaign. His initial assumption that bold policy alone would breed trust among people from all kinds of communities may have turned out to be naive.

When Sanders' finished his speech, a great portion of the crowd jumped to their feet with their fists in the air and started chanting "Bernie! Bernie!" No such display of energy occurred at the end of Clinton's speech the day before. But all signs at the moment suggest that the passion alone cannot fuel a victory.