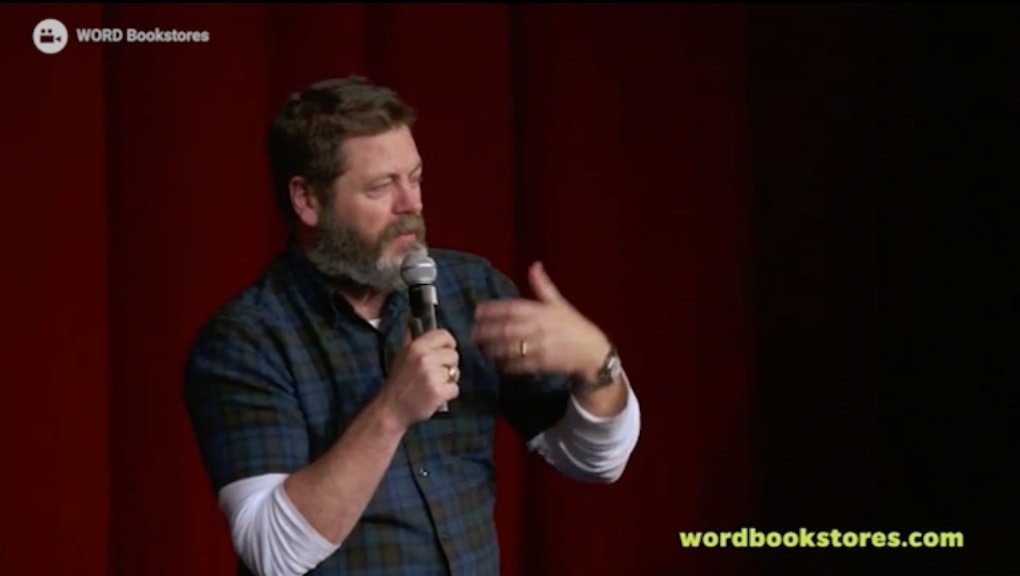 Millennials can be stereotyped by other generations as being lazy and entitled, and that generalization is, in most cases, unfair. They are dealing with unprecedented levels of debt and an increasingly tough job market. As such, the assertion that they don't work hard enough to get what they earn is unjust — and Nick Offerman has a pertinent example of this in action.

Speaking with fans at the WORD bookstore in Jersey City alongside actor Patrick Wilson — while referencing his second book, Gumption — the Parks and Recreation star offered up an anecdote to describe the Millennial work ethic, exemplified by one millennial in particular who works in Offerman's woodshop. (Offerman has a propensity for making awesome wooden objects, most recently for Stephen Colbert's late night show.)

"There are kids of every generation from my grandparents to newborns that are becoming or are going to become people who cure cancer, people who invent a better way for world banking," Offerman said. "There tons of smart, charismatic people."

Thus, Offerman introduces 25-year-old Thomas, who went to Harvard and was in Los Angeles for the summer three years ago. He offered to volunteer at Offerman's woodshop, and demonstrated his worth by hanging a door — a task no other employee offered to do.

"I came back the next day, the door was beautifully hung and plumbed and he had mortised the hinges, his details were fucking tight," he said. "And I said, 'Thomas I'd like to shake your hand and I'd like to pay you a wage, my friend, and I hope that you'll stay.'"

The moral of the story: Don't sit on your butt, and be productive. Thomas is just one example of the worth of a hard-working individual, regardless of the generation they were brought up in, can provide.

"It's part of the shitty media message is I think ... selling us the idea that [millennials are] just staying at home, playing shit on their phone," Offerman said. "[It] perhaps makes more people do that, I don't know. What they're not reporting is that that causes depression, and that's really lonely. It's much more fruitful to talk to people and read books and make things with your hands."