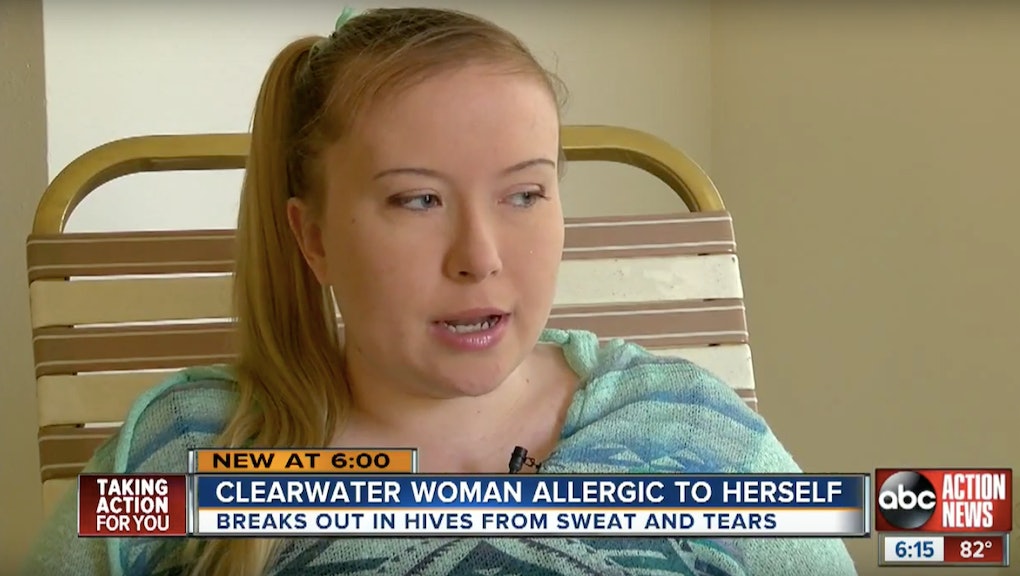 This Florida Woman Is Allergic to ... Herself?

The nightmarish proposition is a grim reality for 28-year-old Florida woman Julie Reid. Reid suffers from a rare skin disorder known as cholinergic urticaria, which causes her body to break into hives in reaction to her sweat and tears, local ABC7 reported.

"It's torture living like this — torture," Reid told the news station. "It itches like crazy, I scratch my skin open ... Any physical activity I do, I develop hives everywhere."

The story gets worse and worse. According to Reid, the condition came on spontaneously, and destroyed her ability to continue her career as a dance and gymnastics teacher. She currently lacks health insurance, and was also denied disability benefits. She was forced to sell most of her possessions to pay for doctors and treatment. Today, Reid never leaves her house in daylight and has gained more than 100 pounds as a result from emotional eating.

Scientifically speaking, most cases of cholinergic urticaria occur in people who are in their teens and early 20s and tend to be mild and temporary. There is not a cure and symptoms can last from a few months to decades.

With no cure in sight, Reid is hoping that getting her story out to the media might be her best chance at finding a solution.