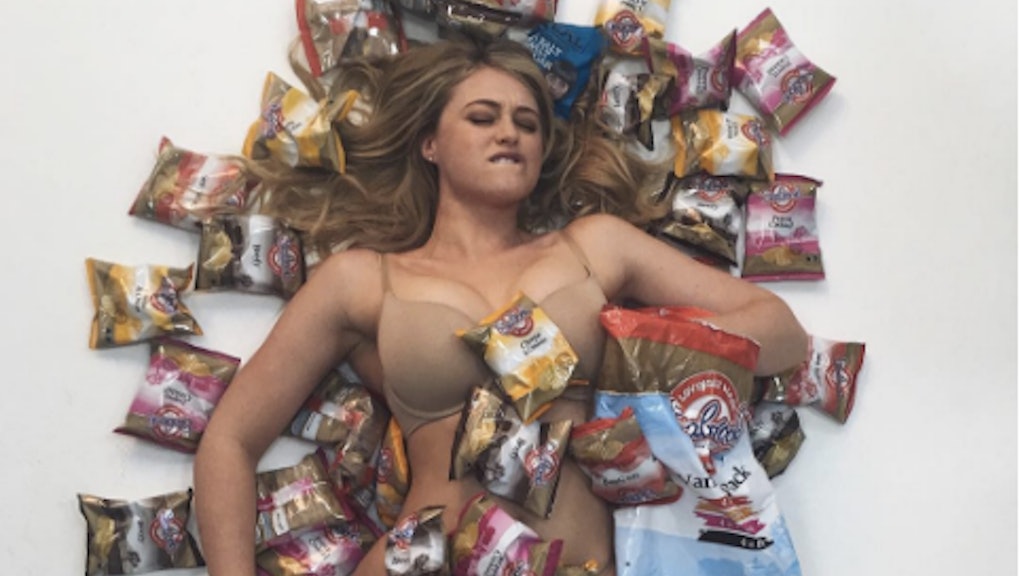 What's the best way to deal with internet trolls? Do you simply ignore them, as popular wisdom advises you to do when faced with a bully? Or do you bite back? Different strokes for different folks, but if we take these four plus-size models as evidence, the latter is the more effective option. These champions clapped back at body-shaming strangers of the web, unequivocally proving that there is no one body that's most beautiful (and also that those offerers of unsolicited opinion were assholes).

Read more: This Girl Has a Strong Message for Body-Shaming Victims: "Wear Whatever the Hell You Want"

Here are four founts of body positive inspiration to channel next time anyone passes unwarranted jugment on your appearance. Because fuck that noise.

In response to a body-shaming commenter who'd accused her, a "fat cow," of "eating too many bags of crisps," Iskra Lawrence — a British model who features in Aerie's unretouched AerieREAL campaign and is a vocal proponent of embracing all figures — posted a majestic photo on Instagram. In it, Lawrence lays on a mountain of chip bags, in her underwear, snacking whilst also looking just fantastic.

"This is for anyone who's ever been called FAT," she captioned the shot. "Opinions are like arseholes — everyone's got one."

Ashley Graham appeared in five beauty magazines in the month of March alone. She is a Sports Illustrated's Swimsuit Rookie of the Year for 2016 and recently covered Maxim America. All of this is remarkable for any model, but it's made even more so by the fact that she's plus-size and helping to break the size zero supermodel stigma. She's got a full and fabulous figure; she works hard to maintain it; she will have none of your fat-shaming, thankyouverymuch.

"As far as dressing curvy girls in activewear, I mean, maybe the assumption was that we don't work out but, honey, I work out," she said in January. "I wouldn't be this cute if I didn't work out."

Haters will do what they do best; Graham, however, will keep celebrating her beautiful body. As she wrote in the caption of a recent Instagram, "#ThisBody is made for kicking some major bootay! #beautybeyondsize."

Lindsey Swift isn't a model — she did, however, appear on the cover of Women's Running UK after she clapped back a random douche who interrupted her run with some unkind and unsolicited commentary.

"I am indeed a big girl, and I am indeed beautiful," she wrote in an open letter posted to Facebook. "Thanks for noticing. I'm not sure who you were telling I was fat, you clearly have eyes, and the only other people present were me and my boyfriend. I assure you that despite your concern I do own a mirror, and my boyfriend has seen my fat body as he too has eyes. Don't tell anyone but I think he might even like it."

"Normally I don't get militant about these things, idiots are idiots," she continued. "However, I can see why comments like these might put a person less confident than me off from running, and that is shameful. Everyone starts somewhere."

"Let me make one thing very clear, I am not ashamed of my body. It has never stopped me from doing anything I want," Swift added.

Women's Running put her on the cover to send a message to dispel the myth that full-figured individuals don't work out, don't take care of their bodies. An eminently worthwhile one-time modeling gig.

Male model Zach Miko was the first to be signed to IMG's recently launched plus-size male model division, Brawn. Growing up, he was always made to feel lesser-than for having a body that didn't line up with what was conventionally attractive. Since entering the fashion industry, he's become an advocate for body positivity.

"It's an insane cycle that can have disgusting consequences," he said. "We need more and more men to stand up and say they are truly happy with the size and shape they are and be genuine."

Naturally, Miko was excited to learn that Aerie was running an inclusive ad campaign featuring men of all shapes and sizes — #AerieMan. When that campaign turned out to be an April Fools' joke — unbeknownst to the models who participated — Miko aired his very legitimate grievances on Instagram.

"This is disappointing on many levels," he wrote in the post's caption. "Not only was the issue of body positivity for men made fun of but it felt to many of us as if it was discounted completely. Every young boy who felt as if they were finally being accepted and included was told once more that they are less than, and that their feelings do not matter."

"I want everyone, men, boys, women, and girls to know that who they are is worthy and they are beautiful," he added.