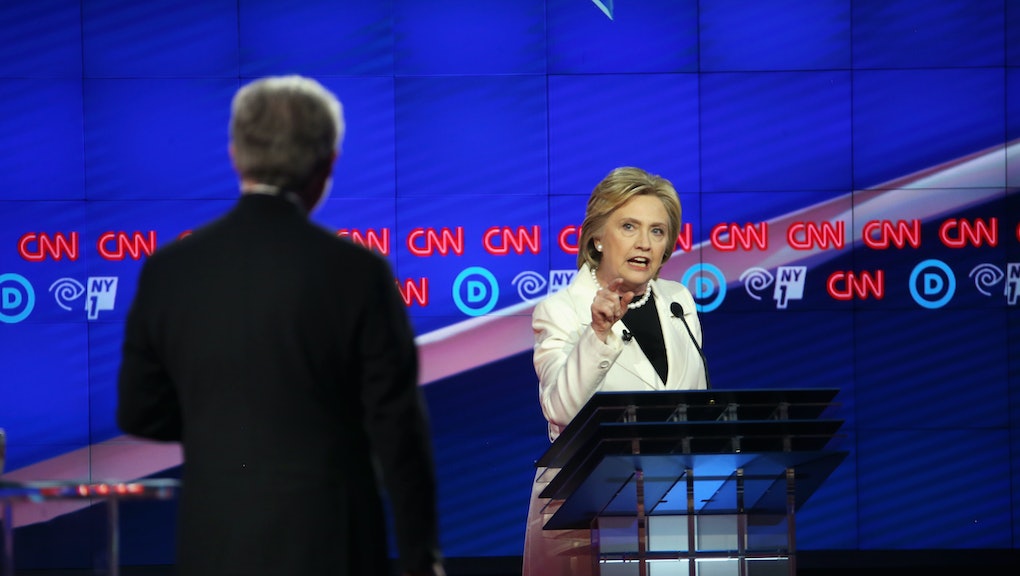 BROOKLYN, N.Y. — Throughout her bid for the Democratic presidential nomination, Hillary Clinton has consistently said that she supports raising the federal minimum wage to $12 an hour. But at the CNN Democratic debate on Thursday evening, she admitted to at least one circumstance in which she'd sign a $15 minimum wage into law.

Fairly early on in the debate, moderator Wolf Blitzer asked, "If a Democratic Congress put a $15 minimum wage bill on your desk, would you sign it?" Clinton replied, "Of course I would."

The response was surprising — Clinton has in the past made it clear that while she's generally supportive of workers agitating for a $15 minimum wage and approves of the wage on a city and statewide level, she drew the line at $12 for the federal wage.

Her rival Sen. Bernie Sanders made it clear that this was news, and implied that it was either a mistake or an act of expediency in response to being cornered by a particularly probing question from Blitzer.

"I am sure a lot of people are very surprised to learn that you supported raising the minimum wage to 15 bucks an hour," Sanders said.

Clinton replied that she's consistently "supported the Fight for 15" and there was nothing inconsistent about her position.

"I think setting the goal to get to 12 is the way to go, encouraging others to get to 15, but of course if we have a Democratic Congress, we will go to 15," Clinton said.

Is Clinton being inconsistent on a minimum wage? It's a little unclear. In the past she's said that she believed that a federal $15 minimum wage could have an adverse effect on the labor market of some cities and states — it appeared that a concern about higher unemployment was what was holding back her support for a full $15 wage. But when during the debate she said she'd green light it if a bill was sitting in front of her, it sounded more like her support for a $12 wage was a calculation about political possibility.

Arguably Clinton is being consistent if she holds the view that if gets through Congress, it reflects confidence from Congress that local economies across the country can handle the wage without an uptick in unemployment. But in an age of extraordinary congressional polarization and bills that are passed by narrow majorities, it's difficult to argue that the bill would be a faithful reflection of popular will or represent a comprehensive assessment of economic conditions.

Ultimately, the clearest takeaway from the exchange is this: there's a consensus in the Democratic Party that the minimum wage needs to increase dramatically, and soon.