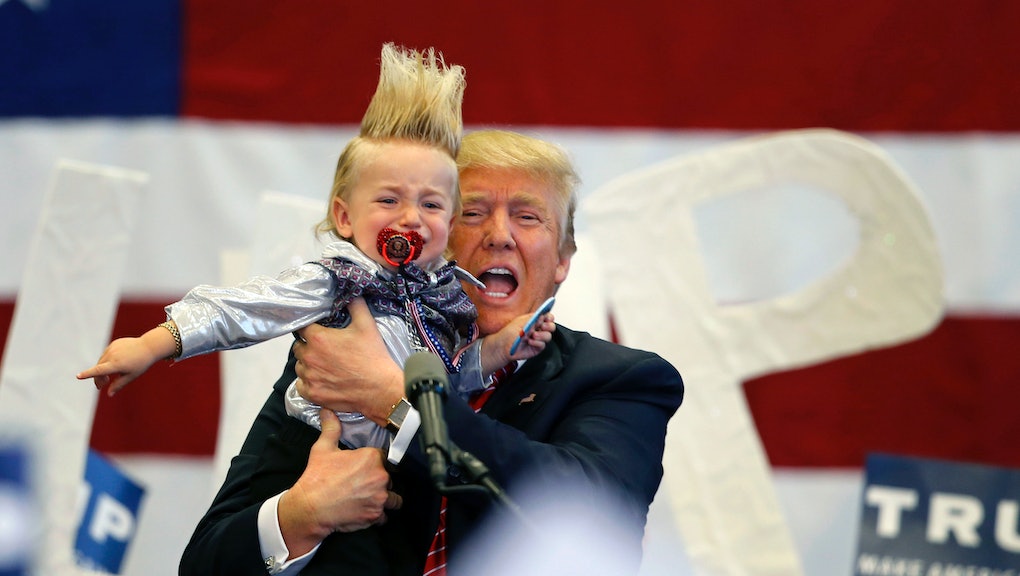 Donald Trump Is Scaring the Hell Out of America's Children, Study Finds

A new report from the Southern Poverty Law Center has given Americans one of their best reasons yet not to vote for a Trump presidency: He's scaring the hell out of our kids, and turning some into racists.

"My students are terrified of Donald Trump," one teacher told SPLC.

Between March and April, SPLC surveyed more than 2,000 K-12 school teachers who either subscribe to the organization's email list or visit its website. They found that a large number of children from racial minority groups are frightened about what would happen to them under a Trump presidency and that Trump's campaign is fueling a hateful discourse in classrooms.

Respondents, who gave their replies anonymously, reported that black, Hispanic and Muslim children in particular have expressed concerns they will be deported — a fear stemming from the GOP frontrunner's racist, anti-immigrant and Islamophobic rhetoric as well as his pledge to deport the country's estimated 12 million undocumented immigrants.

More than half of the educators surveyed have seen a spike in what the report calls "uncivil political discourse." This includes an increase in racist insults lobbed between kids and the invocation of Trump's name as a taunt to intimidate children of color.

"Educators are perplexed and conflicted about what to do," read the report. "They report being stymied by the need to remain nonpartisan but disturbed by the anxiety in their classrooms and the lessons that children may be absorbing from this campaign."

One Montana teacher reported a 5th grade student told a Muslim classmate "that he was supporting Donald Trump because he was going to kill all of the Muslims if he became president!"

One high school teacher in North Carolina said some of her "Latino students ... carry their birth certificates and Social Security cards to school because they are afraid they will be deported." Another educator in Montana reported a fifth-grade student told a Muslim classmate that he was supporting Donald Trump "because he was going to kill all of the Muslims if he became president!"

Mic has also reported on incidents where chants of "Trump!" have been used to intimidate opposing players of color at sporting events.

It's all leaving teachers with a sour taste in their mouths — and a genuine fear for their students' well-being. Election season is usually an opportunity to teach kids about the American democratic process, but the SPLC report found Trump's hate-filled campaign has made more than 40% of teachers hesitant to talk about the election.

"I try to not bring it up since it is so stressful for my students," a teacher in Arlington, Virginia, told the SPLC.

While the report is not statistically representative — it draws from a segment of the population inclined to skew anti-Trump — it nonetheless offers a glimpse into the way the election and its rhetoric are affecting young students. SPLC frames it as "the richest source of information that we know of about the effect of the presidential campaign on education in our country."

So there it is, America, from the mouths of babes. Read the rest of the report at Southern Poverty Law Center.