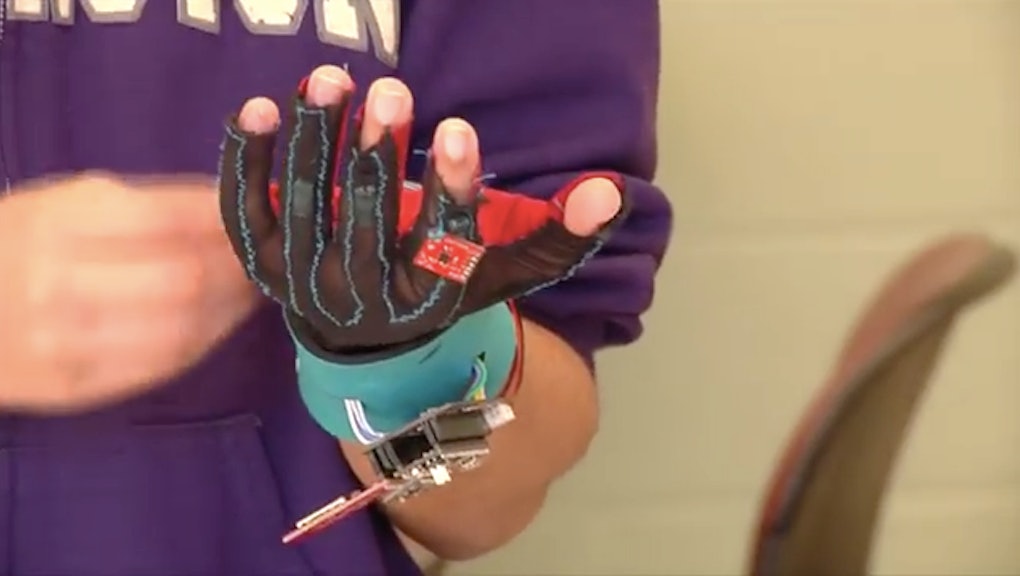 Two undergraduate students want the American Sign Language community to have a translating device sleek enough to wear everyday like some people wear a hearing aid or contacts.

Thomas Pryor and Navid Azodi, sophomores at the University of Washington, just won a $10,000 Lemelson-MIT Student Prize for SignAloud — a pair of gloves that can translate sign language to text and speech nearly instantaneously.

The two students met on the first day of college. They both liked to tinker. They are both bilingual (Azodi speaks English and Farsi, Pryor speaks English and Spanish) and language is important to them. They told me they believe language to be a fundamental human right. So they created a glove that breaks down the language barrier for the deaf and hard of hearing community, which consists of millions of people in the U.S. alone, according to the Gallaudet Research Institute.

"Everyone should be able to communicate with everyone else," Pryor said in a phone call. "It's about breaking down these barriers. Really good ideas can come when people can collaborate. That's the impact we are going for."

"When we were talking about things being accessible and connecting people and making that impact we found that language and communication was the piece that holds it all together," Azodi added.

Both Pryor and Azodi also spoke about the beautiful complexity of ASL. With SignAloud, they want to make sure they capture the intricacies of ASL, which they admitted is "very difficult." In its current iteration, each SignAloud glove is equipped with sensors that wirelessly send data on hand position and movement to a central computer, which processes the corresponding word or phrase and then delivers it almost instantaneously through a speaker.

The device, in its second iteration, cost Pryor and Azodi under $100 to create. "Now that we have a few extra 0's, we really want to invest back in the gloves and make them more ergonomic and practical to use," Azodi said.

There have been smart gloves that translate sign language into text and speech in the past, but Pryor and Azodi believe SignAloud is a more ergonomic, consumer-friendly device than former attempts. They are also working with more people in the deaf community to help refine the glove and slim it down.

"This is their culture," Azodi said. "Understanding that is the first step in all of this."