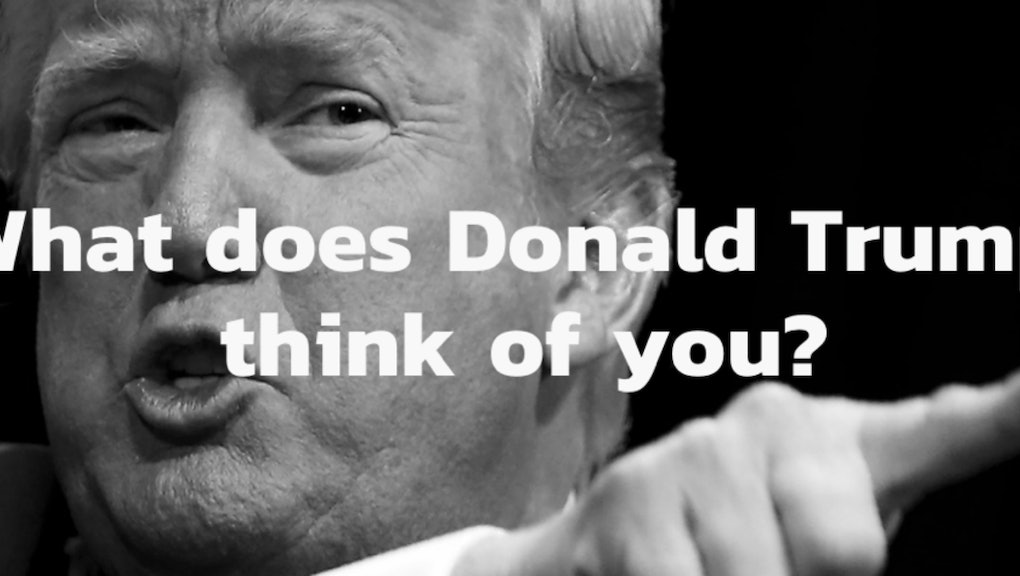 Does GOP hopeful Donald Trump like you? Are you curious about what you would be subjected to under a theoretical Trump presidency? The folks at Purpose have launched a satirical website today called FreeTrumpScore.com to provide voters with some insight on their fate should Trump become the 45th president of the United States.

FreeTrumpScore works similar to websites determining your credit rating, but instead of outstanding debt and line of credit, FreeTrumpScore factors race/ethnicity, gender, class, religion, sexual orientation, whether you were born in the United States, as well as the size of your hands.

Like your credit rating, your Trump score can range between 300 and 850. FreeTrumpScore then clairvoyantly determines your "projected fate," which ranges from a mandatory stay at "Trump Resort Guantanamo Bay," to a position on Trump's cabinet as a "personal bronzer," to a vice-presidential nod.

FreeTrumpScore will also break down the likelihood of various events, from your deportation to your appearance on a Presidential edition of The Apprentice.

Elsewhere, the website will also compare your score to other public figures such as white supremacist David Duke (with a nearly-perfect Trump score of 843) to Trump's ex-wife Melania (a moderate 668) to Nobel Peace Prize winner, Malala Yousafzai (an abysmal  389).

Josh Hendler, CTO of Purpose, said in a press release that "It was an awful job to analyze Donald Trump's ugly statements to refine the FreeTrumpScore algorithm, but someone had to do it." Hendler and company had to pore through "months of speeches, interviews, and debates to assign weights reflecting Trump's hatred of just about everyone not named Trump."

FreeTrumpScore is the first of many "personalized digital tools" that Purpose is developing for the purpose of mobilizing 18 to 39 year olds to "fight against bigotry, racism, sexism and demagoguery in this election year."

"61% of millennials getting news via social channels," cofounder and CEO of Purpose, Jeremy Heimans, said in a press-release. "The key is giving [young people] more ways to actively participate and create more channels for edgy, highly shareable rapid-response content, memes and interactive experiences that engage participants more deeply, which will then have ripple effects beyond millennials and across other generations."