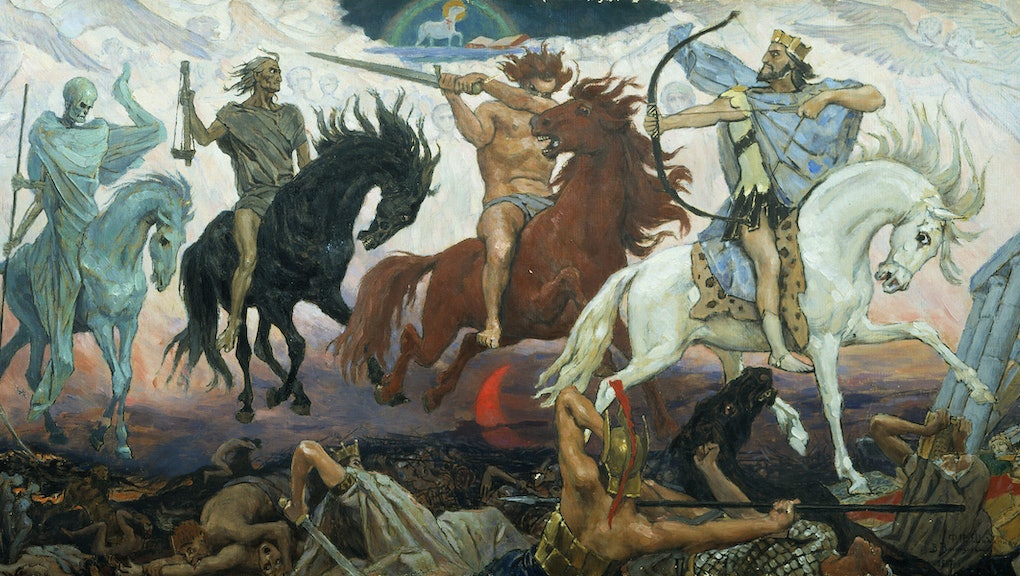 4 Conspiracy Theories About the Apocolypse

It will come someday — maybe next week — for you, everyone you know and love and probably even the whole universe. Let's be real.

What form the great undoing will take has forever been a source of fascination and vexation for humankind. Theories have come from prophets to zealots to seers to, well, computer nerds.

Below are just a few of the theories that have capitvated us:

You can't really talk about the Apocalypse without giving a shout out to the Bible. In many ways the ancient document got the ball rolling with much of the traditional imagery like the Four Horseman and the Seven Seals. According to a strict and literal interpretation of the New Testament's Book of Revelation, the second coming of Jesus Christ would commence with the "four horsemen" raining down plagues unto the world before its final destruction. The righteous are redeemed — the less righteous, not so much — and Earth is replaced with a glorious afterlife.

The Mayan people's "long count" calendar has fascinated people for centuries after the civilization's demise. The aptly named calendar began in the year 3114 BC and ended — abruptly and without explanation — on Dec. 21, 2012 AD. The sudden ending of the roughly 5,000-year-old count led some to conclude that the Mayans had seen the future and that it would end in an apocalyptic maelstrom. It inspired lectures and the film 2012.

Another bold-faced name in the pantheon of doomsayers, Nostradamus has been credited with predicting the rise of Hitler and (falsely) the 9/11 terrorist attacks. The 16th century French seer is famous for his vague yet strangely predictive prophesies which take the form of hundreds of cryptic "quatrains." Nostradamus' so-called Hitler quatrain reads as follows:

Beasts ferocious with hunger will swim across the rivers,

In any case, there is some good news for for those who like being on Earth. While Nostradamus did predict the end of the world, it's not supposed to happen until 3797 seemingly from asteroid strike — though of course that, too, is disputed.

Predicting the end of the world is not just a hobby of zealots and seers; Y2K showed that even tech nerds have something to say about the siren song of oblivion. The year was 1999. The new millennium was just around the bend, and, just like when the last millennium rolled around, humankind was caught up in talk of the End. But this time the concern was less "divine rapture" and more "technological implosion" that would result in global chaos as computer systems failed to adjust to the new year.

The crisis would cause planes to fall from the sky and stock markets to collapse. But none of it happened, and while many subsequently called the matter "much ado about nothing," a later analysis by RetroReport showed that, in fact, heroic programmers had made a significant difference in averting catastrophe.