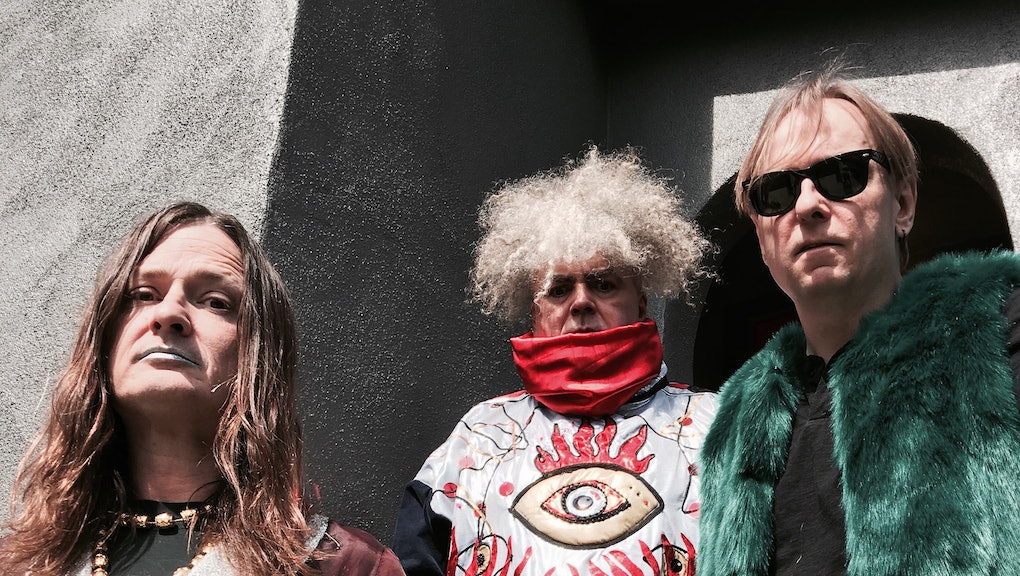 Every rock 'n' roll song that's been recorded since the late '90s contains the thumb print of the Melvins.

The band has done so out of the limelight. They never sold out arenas the way bands like Nirvana, Jane's Addiction and Soundgarden did, but in crafting a unique sound and sticking to it, they've managed to outlast most of their contemporaries. Unlike those other names, the Melvins still loom large in heavy metal.

"I don't feel jealous of bands or contemporaries that have made it bigger than me because I know I'm not the same kind of animal that they are," the band's frontman, Buzz ("King Buzzo") Osborne, said in a phone conversation back in March. "My music is not like that. It's not to be perverse, it's what I like."

The Melvins currently stands between two releases this spring — a collaboration with godheadSilo's Mike Kunka called Three Men and A Baby, released to a warm reception in April, and their forthcoming Basses Loaded. Despite 30 years of albums to measure up against, Osborne seems unfazed by the elder statesman role he holds in the genre.

"It's easy to sit back and romanticize all that kind of stuff, and I'm definitely not a 'good 'ol days' kind of guy," he said. "I'm much more about what you have done lately. It's difficult to not repeat yourself to some degree, especially considering the amount of material that we've put out, but we do our best to keep it interesting."

Once again, the godfathers of weirdo metal have done exactly that and more. The albums are two of the band's best in years.

The album is a unique experiment, but showcasing this rotating cast of punk legends wasn't exactly intentional.

"We were recording with Toshi Kasai, Mike Dillard [the original Melvins drummer] came down for a bit, and we did some stuff with Steve McDonald," Osborne explained. "The next thing you know we did four songs with him and we got a whole album. It was one of those things that just kind of happened. It wasn't a definitive plan, but we quickly realized what he had — this record with a whole bunch of different people on it. It's really cool and they all add something different from what the rest of them would do."

It's a vision of rock 'n' roll at its rawest and freest. And it may comes as some what of surprise to those who have come to see Osborne as an outspoken naysayer of rock 'n' roll music. He has adamantly battled the public romanticism of his childhood friend Kurt Cobain, and was critical of Dave Grohl in March 2014, calling his music "pop," or at best "semi rock." Osborne has also appeared as a guest on Fox News — typically leftist rock and roller's ideological enemy. However, Osborne's idiosyncratic political views only mirror his dedication to pushing the abrasive and untamable diehard brand of rock he has for so many years.

Our conversation veered briefly into election territory, and Osborne tore into each of the leading candidates.

Buzz on Donald Trump: "I don't believe anything the government tells me. Donald Trump is clearly a Democrat: he's a blowhard, knows-all ignoramus egomaniac and aren't we sick and tired of having guys like that in office already? I think we have one sitting there right now. As well as the one before that, and the one before that... When did we not?"

Buzz on Hillary Clinton: "Hillary Clinton to me is a woman who is completely without principle. Here is a woman who thought it was okay for her husband to compromise the presidency by receiving a blow job in the oval office — not unlike Caligula in Rome — and not understanding that in and of itself is compromising the presidency. He can be blackmailed for that sort of behavior. That is wrong."

Buzz on Bernie Sanders: "Now Bernie Sanders, on the other hand. What is wrong with young people today supporting this creepy old socialist from the Northeast? I don't get it. Does he honestly want us to believe any of this stuff? His idea to close the gap between the rich and the poor by taking money away from the rich and then plowing it into an inefficient government bureaucracy staffed by brain dead money wasting lazy morons called government employees? He wants education to be free, so in other words he doesn't want people to have to pay a student loan, but he has no problem with people having heavy taxes. He wants me to pay for it — he thinks I, someone who's not going to college and never went to college, should support people who do."

While these views may be wildly unpopular, they stick with subculture tropes that were present through the contrarian musical revolutions of the '80s and '90s — including the decommercialization of the personality, skepticism of labels and a belief in personal freedom to the extent that it does not harm others.

"I'm not a supporter of any party whatsoever — that includes the Libertarian party — I have no interest in that," Osborne said. "As Groucho Marx said, 'I don't want to belong to any club that would have me as a member.'"

Osborne does not see these beliefs as being contrarian and asserted various times throughout the interview that he should not be taken as a political authority, nor should many entertainers, for that matter. "I honestly believe that people should look to higher sources than entertainers like me for their political beliefs," he said. "If you don't, if you're reading something by Flea or whoever else is writing something about politics, you're just a fucking idiot. Or especially an actor — these are people who would not work two months for $2 million, and I'm supposed to learn from these people?"

Buzz Osborne is clearly not interested in being the next John Lennon, musically or ideologically. Instead, his plan is to keep making music and living the life he's created for himself in the wake of the Melvins' tried and true success.

"I love my life, I love who I am, I love where I'm at, I love who I'm married to, I love where I live, my dog, I love making music with people and especially if you look at the stuff that we're doing, I work with a vast array of hyper-talented musicians, and for a songwriter like me, that is fucking nirvana."