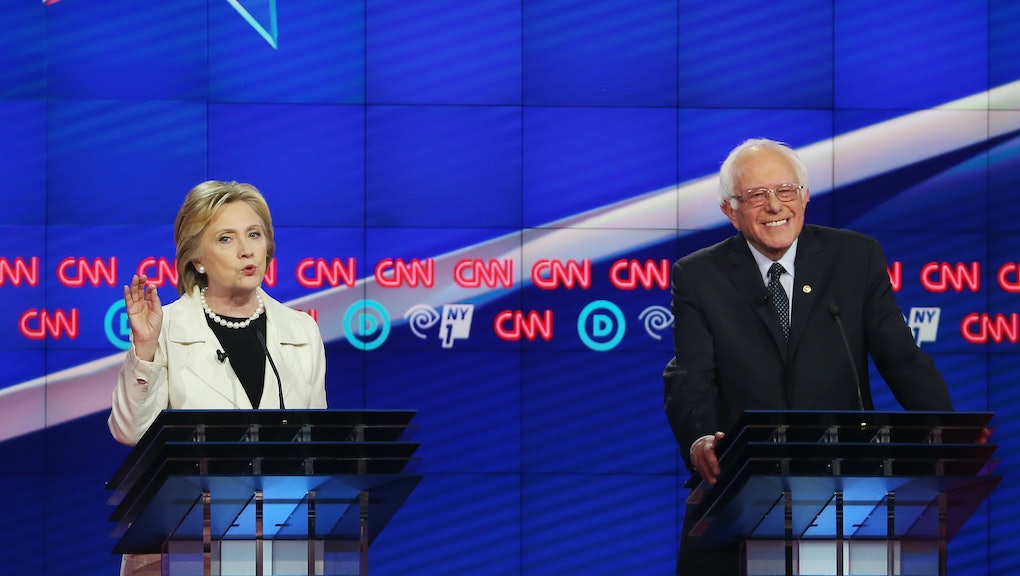 Israel and Palestine. This is perhaps one of the most contentious issues, globally — so much so that no presidential candidate for the United States has ever declared their support for the Palestinians. Until now.

Bernie Sanders sparred with Hillary Clinton in Thursday night's Democratic primary debate on the subject of Israel and Palestine. Couching his message in his "100%" support for Israel, Sanders said the Palestinians needed to be treated with compassion and "dignity" for any progress to be made — and that America plays a big role in that. Clinton did not appear to agree.

"As somebody who is 100% pro-Israel, in the long run, and this is not going to be easy ... if we are ever going to bring peace to that region — which has seen so much hatred and so much war — we are going to have to treat the Palestinian people with respect and dignity," Sanders, who is himself Jewish and has spent prolonged periods of time in Israel, told the audience.

He was responding to moderator Wolf Blitzer's question of whether or not Israel's 2014 Gaza offensive was disproportionate in its retaliation. Sanders replied in the affirmative, a position he's made known in the past.

"Israel was subjected to terrorist attacks [and] has every right in the world to destroy terrorism," the Vermont senator said. "But we had in the Gaza area — not a very large area — some 10,000 civilians who were wounded and some 1,500 who were killed. Now if you're asking me ... 'Was that a disproportionate attack?' The answer is I believe it was."

The Zionist or Israel lobby in the upper echelons of American power has silenced many on the issue of Israel and Palestine. It is "one of the most potent advocacy groups in Washington, D.C.," the Independent explained in 2013, after Chuck Hagel, during his Secretary of Defense confirmation hearing, reneged on his comments that Congress was intimidated by the lsrael lobby.

And the influence extends beyond Capitol Hill. Actors Penelope Cruz and Javier Bardem were threatened to be blacklisted by many Hollywood studio executives after they co-signed an open letter comparing Israel's attacks on Gaza to genocide. Much like Hagel, Cruz had to backtrack and subsequently released a statement saying she only meant to promote peace and that she was "not an expert" on the "complex" issue.

The couple were accused of being anti-Semitic as their critics conflated Zionism with Judaism — a comparison Sanders has overtly rejected. Numerous politically active organizations, such as Jews for Justice for Palestinians, are evidence that being Jewish is not synonymous with being pro-Israel.

Clinton, by comparison to Sanders, was staunchly supportive and defensive of Israel in the debate.

"I don't know how you run a country when you are under constant threat, terrorist attacks, rockets coming at you," Clinton said in response to the very same question regarding disproportionate response. "You have a right to defend yourself."

Sanders was forceful about his position and pushed back in an attempt to pin Clinton down on the issue.

"I don't think anybody would suggest Israel invites or welcomes missiles flying into their country. That is not the issue," he said. "And you evaded ... the question. The question is not, 'Does Israel have a right to respond?' Not 'Does Israel have a right to go after terrorists and destroy terrorism?' That's not the debate. 'Was their response disproportionate?' I believe that it was. You have not answered that."

"I think I did answer it by saying that of course there have to be precautions taken," Clinton replied. She proceeded to blame Palestine for regional political failings and argued it would never have found itself in this position if then-leader Yasser Arafat had agreed to husband Bill Clinton's peace deal.

"Israel left Gaza ... They turned the keys over to the Palestinian people," she added. "And what happened? Hamas took over Gaza. So, instead of having a thriving economy, with the kind of opportunities that the children of the Palestinians deserve, we have a terrorist haven."

Clinton's accusation of Palestinians depriving themselves of a thriving economy overlooks Israeli policy that inhibits economic development in the West Bank and Gaza. For example, it is extremely difficult for Palestinians to access land for commercial or agricultural development.

"I read Secretary Clinton's statement, speech before [American Israel Public Affairs Committee]. I heard virtually no discussion at all about the needs of the Palestinian people," Sanders said.

"Of course Israel has a right to defend itself, but long term, there will never be peace in that region unless the United States plays ... an evenhanded role, trying to bring people together and recognizing the serious problems that exist among the Palestinian people," he concluded. "That is, I believe, what the world wants us to do and that's the kind of leadership that we have got to exercise."