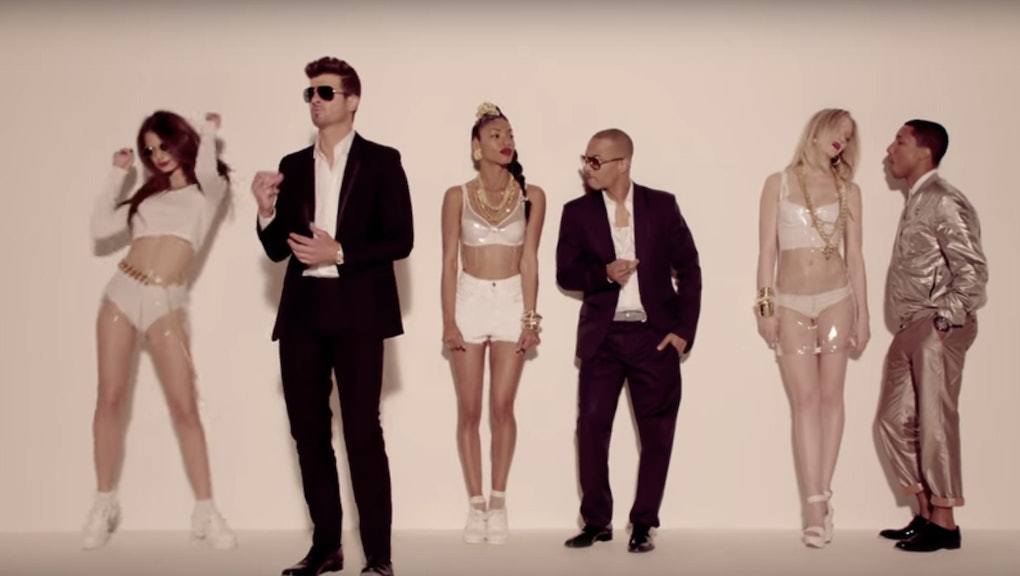 As Paulino points out "rape culture" is more than just a buzzword — it describes a pattern of behavior that creates an environment where sexual assault can thrive. Under these circumstances, jokes, quips, questionable song lyrics and all of the things feminists are "too sensitive" about add up to normalize sexual violence on an everyday basis.

Read more: How These Four Artists Are Shutting Down Rape Culture Through Their Music

In a 1969 stand-up comedy routine, Bill Cosby made a joke about drugging and assaulting women, using a date rape drug called "Spanish Fly." Now that Cosby has been accused of raping more than 50 women, his joke is even less funny than it was then.

And it wasn't until Hannibal Buress made a joke about how Cosby had somehow managed to maintain a flawless reputation for decades despite these accusations, that they were taken seriously. The difference between Buress' "rape joke" and Cosby's? Instead of invalidating victims or celebrating perpetrators, Buress critiqued rape culture itself.

"Boys Will Be Boys"

When their kids are young, parents will sometimes utter these words to excuse the rowdy behavior of their sons. The phrase teaches boys that there are certain harmful behaviors that are part of their nature by virtue of being male — and that it's not their fault.

Psychology Today even says the phrase should be "banned from our vocabulary" and cites a famous case where a judge used similar words to justify the assault of a gay student.

And on Tuesday Erykah Badu defended a dress code calling for girls to wear knee-length skirts to avoid distracting male teachers, calling it men's "nature" to be attracted to a young woman in a "revealing" skirt.

When Robin Thicke's "Blurred Lines" came out in 2013, listeners may have initially been too taken with its impossibly catchy melody to pay close enough attention to the lyrics. Still, it didn't take long to realize the dubious implications of "I know you want it." Near-naked women are objectified and on display in the song's video as Thicke, T.I. and Pharrell sing of the things they know the women want — without asking for their consent.

More recently, Justin Bieber's "What Do You Mean?" echoes similar themes when he says, "What do you mean, when you nod your head yes, but you wanna say no?" While Bieber might sound genuinely confused, with these lyrics the singer buys into the idea that women don't say what they mean, which is not only sexist at its core, but extremely dangerous when it comes to sex. The lyrics also suggest that while Bieber's fictional sexual partner may be saying "yes" that "yes" has been coerced.

Reporting a sexual assault can be a traumatizing and a revictimizing process, which remains one of the reasons 68% of assaults are never reported to the police. Often authorities will ask sexual assault victims if they were drunk, what they were wearing when they were assaulted and why they didn't fight against their assailant, as well as interrogate victims on their sexual histories, as though (perceived) promiscuity could be an indicator of whether or not someone were a victim of rape.

This toxic rhetoric bleeds into our everyday lives when it cycles through the media. In January, CNN anchor Pamela Brown asked councilwoman Laurie Cumbo if it were true that the victim of a Brooklyn rape was drunk on the night of her attack.

In addition to hurting victims of sexual assault and making it more difficult to prosecute their rapists, victim blaming contributes to a culture where the onus is on women to make sure not to get raped, rather than on men to simply not rape.

But even when victims somehow beat the odds and manage to have their rapist, 98% of whom will walk free, convicted, pundits often still favor and sympathize with the assailant.

When 20-year-old Owen Labrie was sentenced for assaulting a then 15-year-old during his senior year of high school, Newsweek reporter Matthew Cooper told ABC News, "How could someone so smart with a bright future ... whatever you think about what happened, how could he have risked so much?" focusing on Labrie's ruined potential instead of his despicable crime.

And in the case of the Steubenville high schoolers who were convicted of raping their unconscious 16-year-old classmate, CNN anchor Poppy Harlow lamented the conviction of the "two young men — who had such promising futures, [were] star football players [and] very good students."