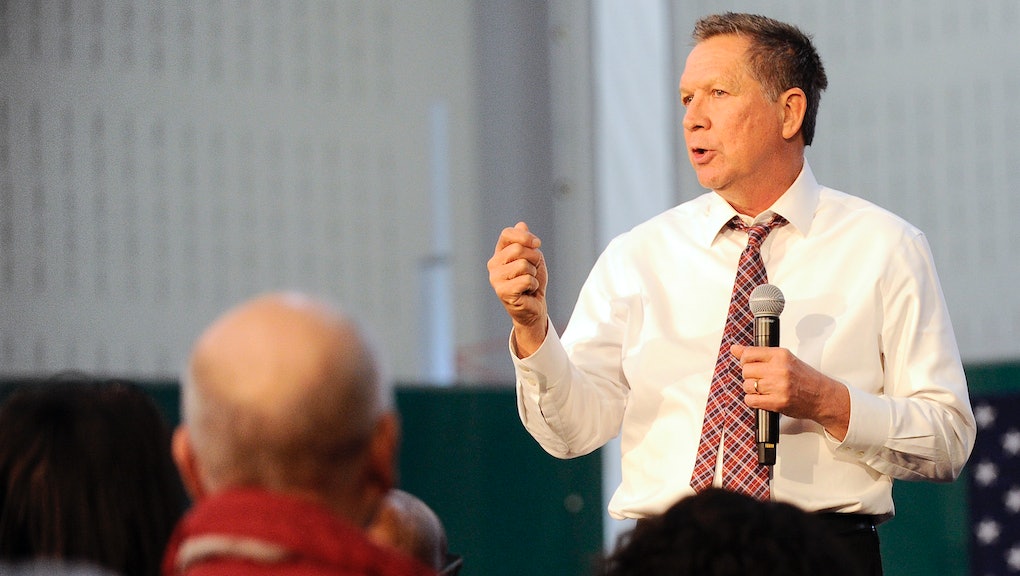 During a town hall event in Watertown, New York, Kasich responded to a question about sexual assault by saying he had led efforts to have rape kits tested in Ohio, as well as expanded access to confidential reporting and the opportunity to "pursue justice after you have had some time to reflect on it all," reported CNN.

Then, in an awkward segue, he told the first-year student who asked the question, "I have two 16-year-old daughters and I don't even like to think about it."

"It's sad, but it's something that I have to worry about," the student said.

"I'd also give you one bit of advice," Kasich responded. "Don't go to parties where there's a lot of alcohol. OK? Don't do that."

While alcohol intake and sexual assault are often linked, experts say it is not a direct causative factor, and blaming drinking can distract from the responsibility of the perpetrator, according to Think Progress. Critics say the governor, a social conservative, was essentially telling women they could avoid rape by acting more demure.

As CNN noted, "other than avoiding parties with alcohol, he did not address how campuses can and should reduce sexual assault in the first place."

The governor, who is sometimes quick to dismiss criticism, nonetheless issued statements on Twitter defending himself on Friday.

According to Kasich, the intent behind his comment was not to shift the blame, but to highlight that alcohol complicates investigations into campus sexual assault.

"I just said be careful where there's alcohol, and the reason why I worry about that is, it obscures the ability of people to seek justice," the governor told CNN. "It gets to be about he said, she said, and there's alcohol and it creates an inability to find the truth. That has nothing to do with saying that somebody who has been a victim is somehow responsible."

In 2014, Kasich came under fire for signing a budget bill with provisions preventing rape crisis counselors from informing victims about abortion as an option if a rape results in pregnancy.