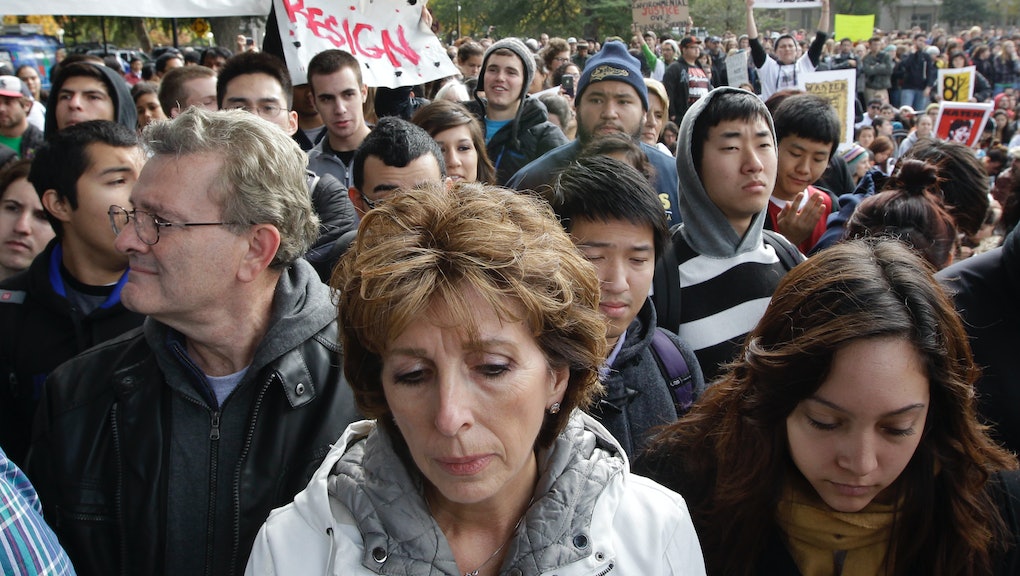 A Friday vote by the student association of the University of California called on UC Davis Chancellor Linda Katehi to resign her post, after trying to get all traces of a school officer pepper-spraying protesters scrubbed from the internet, the Los Angeles Times reported.

Students are furious that, over the past three years, the chancellor has paid two consulting firms at least $175,000 to remove infamous photographs of a university police officer pepper-spraying students and alums at 2011 Occupy protest from the internet. The point of the project was to "clean up the negative attention the University of California, Davis and Chancellor Katehi have received related to the events that transpired in November 2011," according to a proposal from Nevins & Associates, one of the contractors that was eventually paid.

According to the Times, the campaign would also remove "venomous rhetoric" about Katehi and the university from the web.

In 2012, the university determined the pepper-spraying was improper, the Times reported, and it eventually "agreed to pay a settlement to 21 UC Davis students and alumni who sued the university."

In 2013, however, Katehi decided to pay Nevins & Associates $15,000 monthly for six months. In 2014, they contracted another firm, Idmloco, $82,500 in efforts to bury the negative stories in search results — despite the fact the famous photographs were already distributed far and wide on the internet and the officer involved, Lt. John Pike, had become a meme.

Many in the campus community are also infuriated by the recent revelations that Katehi collected $420,000 by serving on the board of textbook publisher Wiley & Sons for four years. She also violated campus policy by taking a paid, $70,000 a year seat with the discredited for-profit DeVry Education Group earlier this year. Katehi has since apologized, but remained at her post.

"The pepper-spray incident shaped student protest and campus response for the last five years," student association President Kevin Sabo told the Sacramento Bee. "Chancellor Katehi abdicated responsibility, but still felt it was necessary to initiate an impossible hunt to save her reputation. This is not a lapse in judgment, but a pattern of Katehi's blatant disregard of her responsibility as a UC leader."

According to the Bee, the backlash to Katehi's use of school funds has likely more than undone whatever progress the consultants made.

"On Wednesday, before the Bee's report, a Google search for 'UC Davis pepper spray' produced about 100,000 results," the paper wrote. "Saturday morning, the number was 267,000."