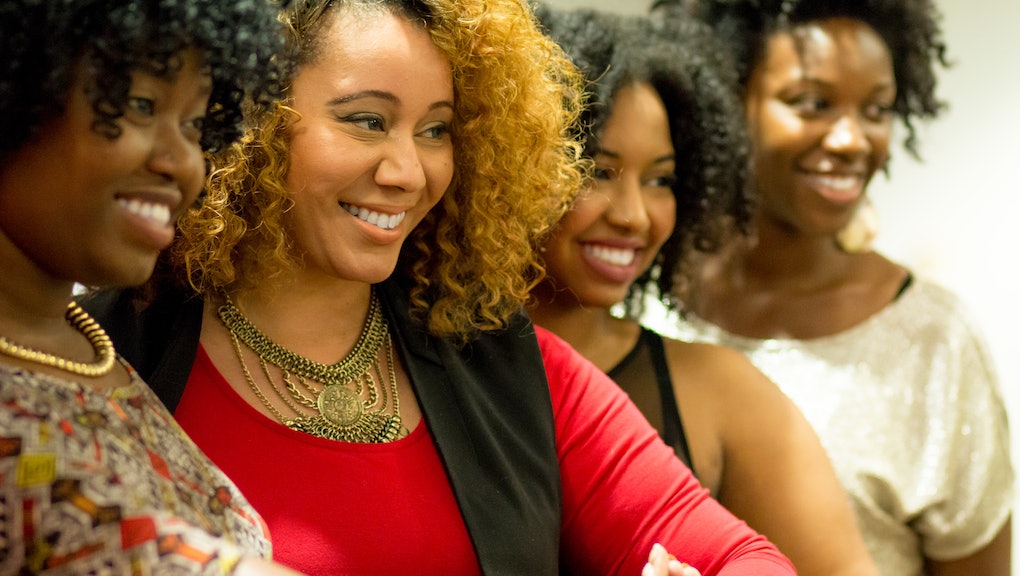 On Saturday, 25-year-old Monae Bispham was named Miss Naturally Crowned Carolina 2016. A Brooklyn native, Bispham has been wearing her hair natural her entire life despite facing a fair share of backlash from colleagues and even family.

Rather than conforming to someone else's ideals, she's learned to embrace the natural state of her hair while holding down a successful career as an admissions counselor at Claflin University in South Carolina.

To pageant coordinators Jessica Boyd and Maureen Ochola, Bispham was precisely the kind of contestant they were looking for: a woman who's created a life for herself while proudly wearing her hair in its natural state. That's exactly what Boyd and Ochola have strived to celebrate during their annual Miss Naturally Crowned pageants in Columbia, South Carolina, for the past two years.

The idea came to them back in 2013, when Boyd, the owner of her own brand development firm, and Ochola, an engineer, were both having trouble with their hair — or, rather, other people's less-than-spectacular knowledge about their natural hair.

"We were suffering from finding resources for natural hair, and a lot of the beauty supply stores were owned by people who didn't know our hair," Ochola said in a phone interview. "And so we wanted to create something where people like us could go and get the knowledge that we needed."

At first, the women, both 28 years old and friends since middle school, wanted to invest in a beauty supply store. But then, they started to think bigger. What if the way in which they could raise money to open that store could also give back to their community and educate others at the same time?

The reason the number of contestants has remained low (this year's competition saw nine women compete) is because it's not just a one-day competition for these women. For two months leading up to the big day, Boyd invites the women, who can be from 19 to 30 years old, to participate in hair tutorials, media training, fitness and business workshops. They learn about how to present themselves in business meetings or job interviews, and are even given makeup lessons.

"They're everyday women walking down the street," Boyd said in a phone interview. "They're teachers, they're mothers, they're college students. I think one thing that we love to see is the growth from the beginning of the competition."

It's not just about beauty. What the competition entails has evolved over the last three years. It's gone from simply showcasing the beauty of natural hair to also showcasing the womens' innovation in business, while Ochola and Boyd continue to raise money for their beauty supply store, Quench.

"Our first year, a lot of the energy was surrounding the promotion of natural hair and empowerment," Ochola said prior to the competition. "Last year we introduced a pitch concept, with the woman all focused on entrepreneurship. They got on stage and pitched their particular business. This year is a hybrid."

On the day of the actual competition, the judged rounds include a dance number, a business pitch, a Q&A in which they talk about their personal experience with their natural hair and an evening gown segment. Additionally, during each of those rounds, the women are judged on how they've done their hair.

"They all have natural hair of course, but they come with their own set of experiences," Boyd said. "The one thing we really look for is someone who is willing to grow. Even if they do have confidence or if they're the flower on the wall, they realize there's something they didn't know about themselves. They feel like queens, all of them."

On the day of the competition, there are also natural hair product vendors and styling demos so that the 400-plus attendees can educate themselves during the show. And that's critical due to the fact that, over the last year in particular, natural hair has been a prominent figure in the continuing discourse on race in America. Over the past year, it's a style preference that's been a topic of conversation on red carpets, magazine covers, fashion runways and Democratic town halls.

Politics plays a big role. According to Boyd, the increasing conversation has a lot to do with our political climate today.

Ochola even credits the pageant's increasing popularity with more women now embracing their natural hair, mostly because they finally have the resources to know what to do with it.

"Natural hair, you kind of have to learn it," Ochola said. "Before, we never had so much exposure with technology. Now you've got things like YouTube and Instagram and social media outlets that show you it's not only beautiful but versatile."

That's precisely one of the main impressions Boyd and Ochola want the pageant's attendees and participators to come away with. What's also important is that they recognize all the women up on that stage as entrepreneurs, which is important since so many people are quick to pronounce natural hair as "unprofessional."

"What I like the audience to get out of it is that there's nothing that should stop you from going after what you want," Ochola said. "No matter how small you think it is or how big it is. Just to see the apprehension of the contestants in the beginning and the boldness they hold at the end. And then to these girls, the youngest girls, it's inspirational."

Given the intensive training the women go through with Boyd and pageant coach Lolita Frazier prior to the competition, it's almost like there are no real runner-ups, but rather one woman who receives an additional $1,000 prize to launch her own business or further her education.

On June 24, Boyd and Ochola will have the opportunity to crown yet another winner when they bring their Miss Naturally Crowned competition to Charleston, South Carolina, for the first time ever, showing a new community just how versatile, beautiful and powerful natural hair can be.