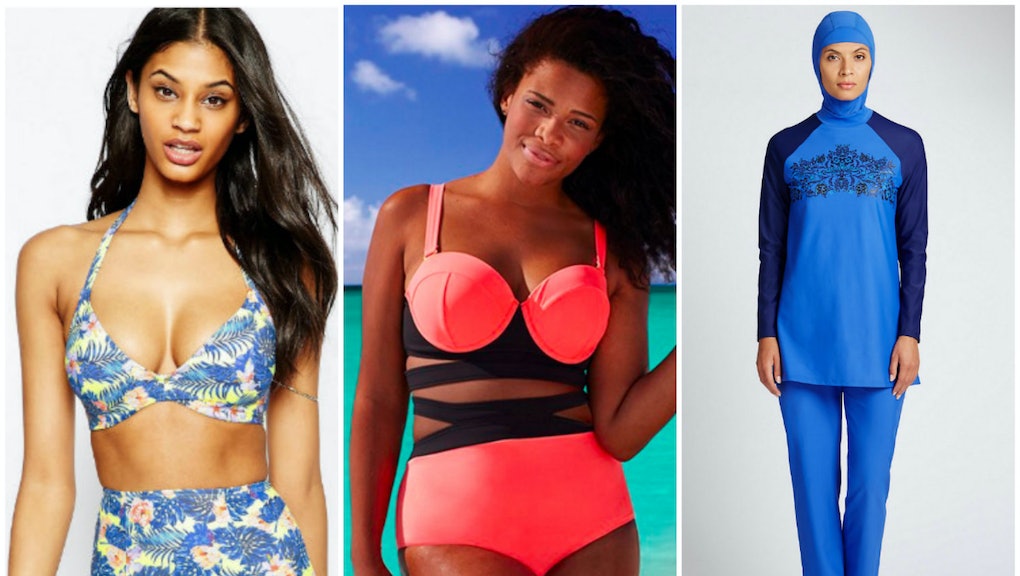 These Companies Are Showing Victoria's Secret How to Do Swimsuits Right

In our minds, a place like Victoria's Secret, which has more than 1,000 locations across the United States, should be fully equipped for all types of people. But unfortunately, it's not.

Read more: What Swimsuit Companies Are Getting Wrong About What Women Really Want

And because it's not, a variety of problems arise. Where can women who wear size 14 or above get cute bikinis? What about women who want to wear modest swimsuits? What happens when someone who's gender nonconforming hits the beach?

Fortunately, in this day and age we live in, each of these problems now have solutions in online businesses that see the gaps in the market and work to address them. Some still have a bit of improving to do, but rest assured that Victoria's Secret definitely doesn't have all the secrets to swimsuit success any longer.

The problem: Victoria's Secret has very few bikini tops that are DD+.

For a store that's found its own niche in sexy push-up bras, you'd think that it'd have the DD+ swimsuit market on lock. But alas... no. Although bikini tops can reach up to 36DDD, that's still not nearly as inclusive as it should be, especially since the average bra size for American women tops 34DD.

The problem: Victoria's Secret swimsuits only go up to an XL.

At Victoria's Secret, the largest overall size in one-pieces and bikinis is an XL. Given that the average size of the American woman is 14, that's leaving millions of women without a swimsuit. It's also, by the way, missing out on an $17.5 billion industry. With plus-size departments and clothes in general getting a bad rap on their own, swimsuits naturally get looped in there, and for good reason, many people find them "matronly."

There are some companies that are trying to give the market a makeover. Namely, there's Lane Bryant, which has swimsuits through a size 32 and, again, online retailers like ASOS, which has its own ASOS Curve swimwear collection with things like bikinis covered in palm trees. Unfortunately, plus-size swimsuits are more commonly sold online than not, but some outlets do provide shoppers with free returns. Additionally, there's also the website swimsuitsforall, which stocks a particularly youthful and funky line from from fashion blogger GabiFresh, and Addition Elle, which specializes in more basic options up to a 4X.

The problem: Swimsuits for modest dressers haven't yet hit the mainstream.

You may think that a modest swimsuit, or one that makes an effort to cover the arms and even sometimes legs, can't be modern or interesting or close to being worthy of being stocked at Victoria's Secret. But you'd be wrong.

In reality, it's a market that's currently booming, as designers take advantage of modesty's growing effect on the entire fashion industry, as well as the sudden realization that Muslim women are powerful consumers, creating an industry that will reportedly be worth $327 billion by 2020. In turn, there are now high-end swimsuits fit for Muslim women.

Coined the "burqini," many of these modest swimsuits for Muslim women come adorned with their own hijbas, while others may come with a hat or scarf for additional coverage. Most recently, the British department store Marks & Spencer started selling burkinis for 50 British pounds, joining a number of online outlets like Modanisa and East Essence.

Additionally, there's companies like HydroChic, which doesn't go by any one religion or person's rules on modesty in particular. Instead, they're offering a product for anyone who may want to be more covered up at the pool or on the beach.

The problem: Swimsuits are highly gendered.

Swimwear is one of those sections of fashion that is highly gendered. For people who identify as women, the options are the one piece, the tankini or the bikini. For trans men, you've got board shorts, speedos and... that's it.

But for trans men, gender nonconforming people or anyone else who's uncomfortable wearing a bikini top, there is an alternative. In 2015, the LGBTQ clothing company FLAVNT Streetwear launched a Kickstarter to raise money for its line of swim-appropriate binders, which would be available in a range of skin tones.

"A lot of [binders] are really bulky or cover your entire torso," FLAVNT co-owner Chris Rhodes  said in a previous phone interview. "As a transmasculine man, I like to be in the water and in the sun so I was like, 'Why don't we make a top that does bind but lets you be as shirtless as possible?'"

The Kickstarter was a hit, raising more than its $25,000 goal, with hopes to expand the line to darker shades of beige and brown to be more inclusive. Currently in production, the binders (chest-compressing garments) will hopefully be available by summer.

The problem: Cute swimwear for breast cancer survivors who have had mastectomies doesn't exist.

Given that swimsuits can be akin to bras in terms of how they fit, breast cancer survivors who have had mastectomies deserve designs that they feel comfortable in.

Online, there are specialty boutiques that consider their needs, like the Mastectomy Shop and Survivor Room. But from what we can tell, there isn't a wide range of options for these women in terms of style. The swimsuits in shops geared towards people who have had mastectomies are not modern, which is surprising given the fact that all that makes a "post-mastectomy" or just "mastectomy" is that there's room for a woman to put her breast forms. Really, the only option for stylish swimwear for these women is over on swimsuitsforall, but there should be more.

Perhaps if a place like Victoria's Secret invested in this sort of product, then designs for these women could improve — but that's not the case yet. Now, it's small companies that are creating change in the industry, and creating swimsuits for a variety of different people. In combatting the lack of inclusivity within brands like Victoria's Secret, it's these smaller companies that are making a difference.