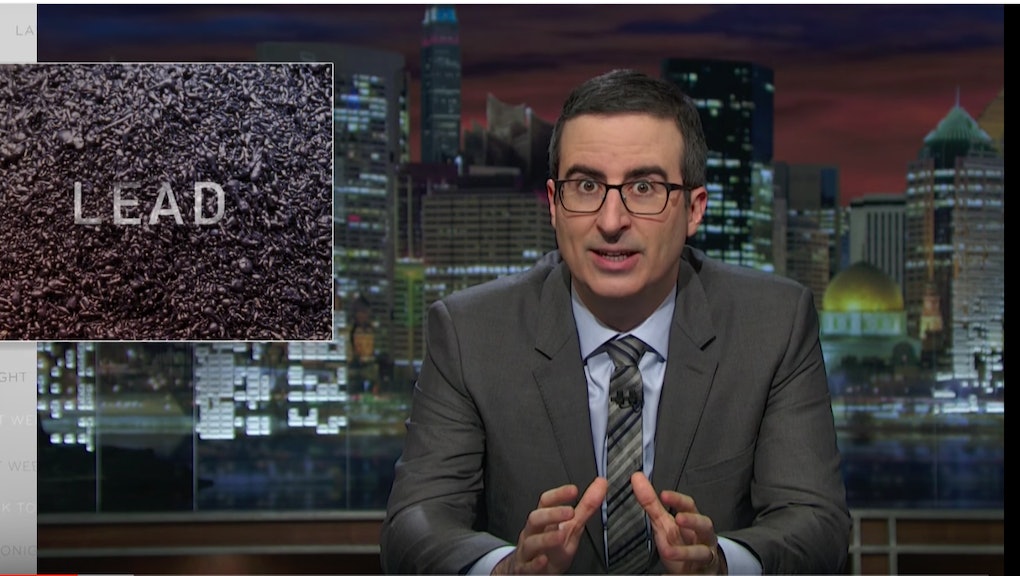 One would imagine the horrific lead crisis in Flint, Michigan, would result in better regulations and funding to combat lead contamination in water systems, but as John Oliver explained on Sunday's Last Week Tonight, that might not be the case. The host examined the water crisis on a broader scope, pointing to the USA Today report from March that revealed nearly 2,000 water systems across all 50 states had excessive lead.

"We can't just act like it's not there the way we all pretend that the public swimming pool is not 3% child urine," Oliver says.

Yet, sadly, that's precisely what's happening. As Oliver notes, millions of homes with children in the U.S. are a lead dust hazard, and even trace amounts of lead ingestion could lower IQs, create antisocial behavior and more. "It's one of those things so dangerous you shouldn't even let a little bit of it inside you — much like heroin or Jeremy Piven," he says.

It also could have been avoided at a very early stage. Oliver explains other countries had banned lead as early as the 1920s, while America didn't take the concept of lead poisoning seriously enough until the '70s and '80s. At that point, even after the industry went down after a "ridiculous fight," irreparable damage was already in place.

The cost of testing for and removing lead nationwide would be over $16 billion a year for a decade — the kind of number, as Oliver points out, that greatly concerns Congress. The cost "is the sort of figure that turns the government into parents with a sick family dog," he says.

In the end, Congress wouldn't appropriate the necessary funds, and in 2016 the Department of Housing and Urban Development was only given $110 million, which is even less than the $230 million per year it would take for partial controls, Oliver notes. "That is just a little more than Americans spent to go see Ride Along 2, a movie which, incidentally, the New York Post described as 'as funny as lead poisoning,'" Oliver says.

Thus, the way to convince Congress that lead poisoning is an issue worth funding is perhaps best encapsulated in Sesame Street, which ran a campaign on the dangers of lead in the '90s. Thankfully, Oliver was able to enlist their help once again. While Elmo could only muster $1.76 to the cause, the group, unsurprisingly, broke out into a lead-themed song.

Check out the full segment on lead poisoning below.