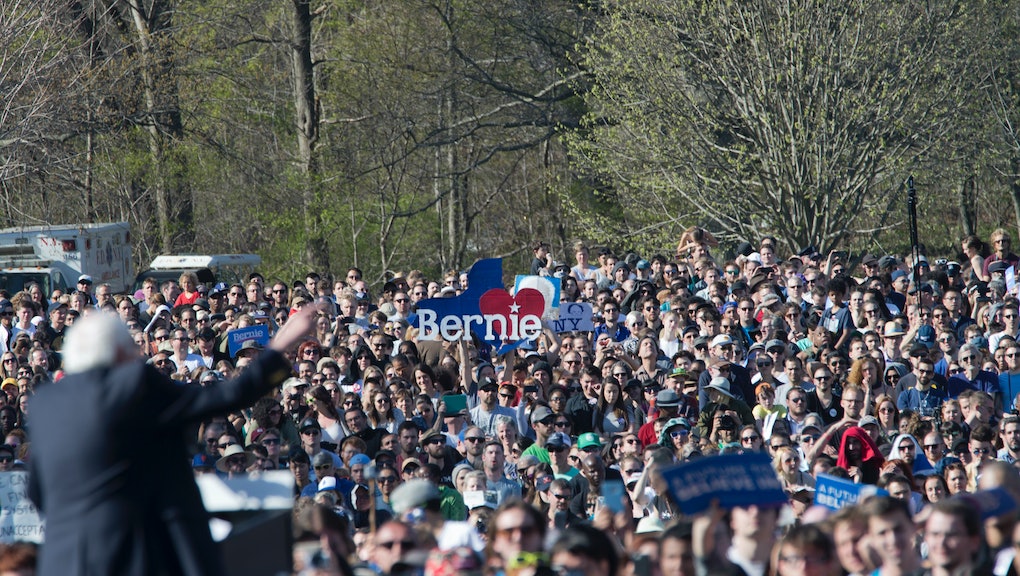 Here's How Bernie Sanders Has Already Ignited a Political "Revolution"

Is Bernie Sanders' renegade presidential campaign a movement in the making?

Slate's Jamelle Bouie put out a rather persuasive manifesto Sunday arguing that the answer to that question is "no," or at least, not yet. Bouie's point is well-argued, but it understates a few qualities that do make the energy stoked by Sanders' campaign unique and potentially promising for the left.

The heart of Bouie's argument lies in placing Sanders' campaign in the context of other insurgent Democratic presidential campaigns in modern U.S. history. Sanders' rise is impressive, he says, but if you move past the veneer of radicalism, he looks like many of his predecessors:

Remove his "socialist" branding, which even he defines as little more than an updated form of New Deal liberalism, and you're left with a candidate who strongly resembles other insurgent candidates going back to the beginning of the modern primary process, from George McGovern to Jerry Brown to Bill Bradley to Howard Dean. He relies on "authenticity" as contrasted with the "calculated" positioning of mainstream candidates. He stands on the ideological left, a factional figure who seeks to pull the party in his direction, or pry concessions from a reluctant establishment. And his support comes from the usual places: Young people (especially college students), white liberals, and the most ideological actors within the Democratic Party.

The Sanders coalition: Why does it matter that Sanders' key constituencies are the usual suspects when it comes to support for an outsider opposing establishment candidates from the left?

Because despite being very influential in the conversation over the direction of the party, they don't constitute a majority of its voters. Significant numbers of moderates and racial minorities need to be won over as well to win the party primary, and like insurgents before him, Sanders has failed in this regard. This is most starkly illustrated by his consistently weak support among black voters — a trend so well-established at this point that the share of black voters in a state has become a safe predictor of Sanders' ability to win it.

But there are some demographic factors that distinguish Sanders' upstart campaign from other outsiders who came before him.

First of all, it's not just young, it's extremely young — more than 70% of voters under 30 in Democratic nominating contests have voted for Sanders, which is a larger share than President Barack Obama won in 2008 (at the time, his youth following was considered to be one of the most compelling features of his candidacy).

As Ronald Brownstein reports in the Atlantic, Sanders' campaign is "crystallizing the political emergence of the massive Millennial Generation, which is poised to pass the Baby Boom by 2020 as the electorate's largest voting block."

Sanders is on track to win more total votes, and a higher percentage of the primary vote, than any insurgent Democrat in the modern primary era. .... Sanders has captured a greater percentage of the total primary vote than such previous insurgents as Howard Dean in 2004 (6 percent), George McGovern in 1972 (25 percent), Jackson in 1988 (29 percent), Gary Hart in 1984 (36 percent), and Ted Kennedy in 1980 (37 percent). In actual primary votes, Sanders has already soared past Dean, McGovern, and Hart and is guaranteed to top Jackson (almost 6.7 million) and Kennedy (just under 7 million) after the April 19 New York primary alone. Measured by the share of available delegates he's won (nearly two-fifths, including super delegates), Sanders also seems likely to outshine all these predecessors except McGovern, who captured a majority and the nomination. Only President Obama, in his 2008 primary victory, outperformed Sanders on all those fronts, and as a former keynoter at the national party convention who drew support from key party leaders, Obama doesn't seem perfectly analogous.

This time is different: There are also other compelling qualities to Sanders' coalition. He does well with white working-class voters — a departure from the "wine track" or affluent liberals who were key to the rise of Obama in the run-up to 2008.

But Sanders' stated ideology also matters for the kind of movement he could potentially be sparking with his campaign. Yes, at this point he's more of a Scandinavian-style social democrat than a proper Marxist. But his refusal to disavow the label of "democratic socialist" and his deep skepticism of some of modern capitalism's key features — namely, the growing power of banking and finance in the economy — has consequences.

As Bhaskar Sunkara noted in a Washington Post op-ed in March, "In the lead-up to this year's caucuses, 43% of Iowa Democrats said that they would use the word 'socialist' to describe themselves. According to Pew polls, Americans between ages 18 and 29 have a more positive view of socialism than older generations."

Sanders' followers might not be looking to start the kind of revolution Marx envisioned, but their skepticism of a consensus surrounding free market values in the wake of the Cold War could signal a sea change in the Democratic Party's direction.

The road ahead: As Bouie notes, none of this matters if it isn't channeled into some kind of program.

"Sanders supporters who want to move the Democratic Party to the ideological left need to become Sanders Democrats, political actors who participate in the system as it exists," he writes. "To win a lasting victory — to define the ideological terms of Democratic Party politics — the people inspired by Sanders need to do more than beat the establishment; they need to become it." That means Sanders Democrats need to get involved in and actually win offices in local and state elections in coming years.

Bouie is right that we don't yet know if the energy coalescing around Sanders' campaign will last beyond his campaign, but party politics aren't the only way to channel it. Outsider movements matter as well — Occupy Wall Street, Black Lives Matter and Fight for 15, for example, have all contributed to the zeitgeist that made his unexpected success possible in the first place. There are many ways to contribute to a shift in the political climate. The key is getting involved.