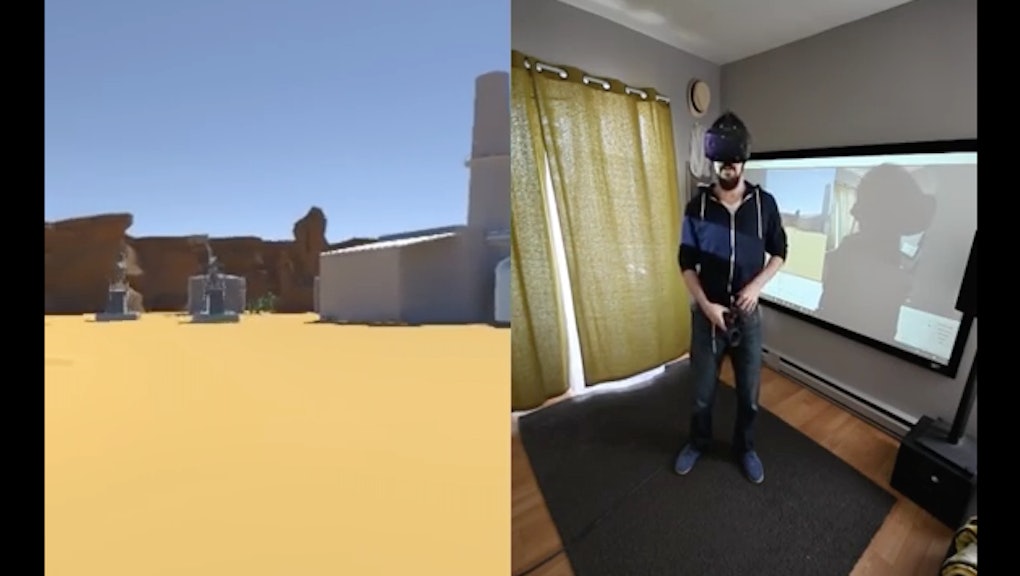 Gamers Are Sticking Wands Down Their Pants, but Not for the Reason You Think

We've seen many instances of people getting freaky with technology, but sticking a virtual reality controller down your pants is more innocent than it seems.

Programmer Ryan Sullivan wanted to make running in virtual reality a more realistic experience, one that has since been difficult to accomplish without dropping a few hundred bucks on a VR treadmill contraption. He found an economical, though not incredibly practical, solution: shoving a plastic HTC Vive controller into his pants.

RIPmotion, Sullivan's prototype, lets you run in your intended direction in the virtual environment by securing one of the controllers on your belt or down the front of your pants with the donut facing outward. To run, you can grip the other controller and strut in place. Your head and hip movements are isolated, so you can look wherever you want while you run in place without changing your path of motion.

So why does it work so well?

Hips don't lie. "Your hips always point the way you are running, because that's how legs work," Sullivan wrote in a blog post. He toyed around with the idea of strapping the controller to his feet, but found it wouldn't accurately track the direction you intended to go. Your hips, on the other hand, are a more reliable indicator of your intended running path.

"Not perfect, but it felt great," Sullivan wrote.

It's not the perfect solution. "Not perfect, but it felt great," Sullivan wrote. In an ideal world, your junk won't have to share space with a VR wand. Sullivan expressed an interest in "additional trackers from Valve" to place on your hips in the near future that can track your motion so that you don't have to rely on this, um, intimate hack.

But in the meantime, embrace the future in your groin.