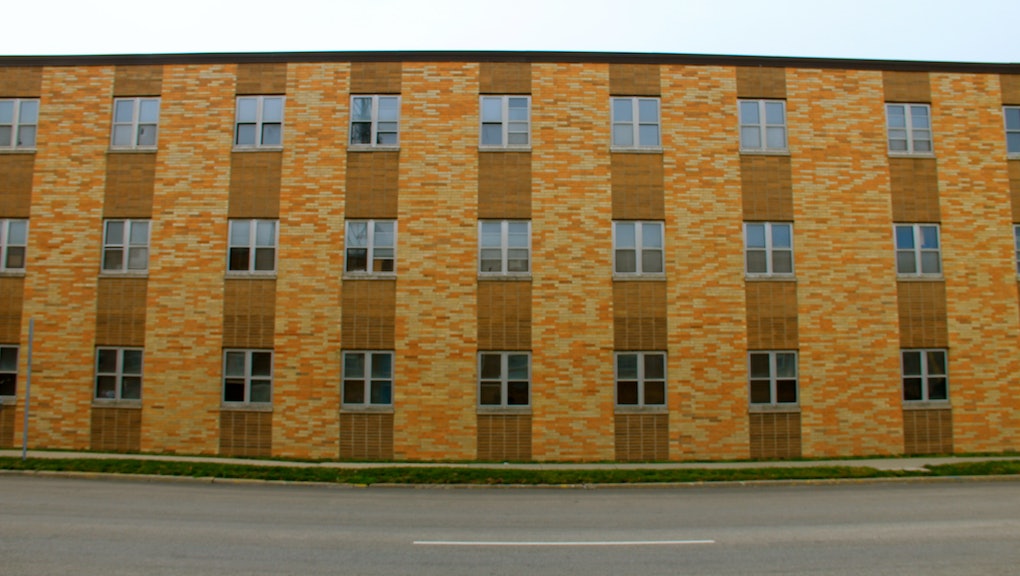 Looking at Ugly Buildings Is Making You Legitimately Unhappy

A new Whole Foods in the neighborhood might signify gentrification, but the spread of chain stores may have another effect on us altogether. As it turns out, taking in the generic, repetitive facades of badly designed buildings can leave us feeling pretty down.

Researchers are increasingly examining the effect of drab environs on our psyche, according to New York magazine's Science of Us blog. A growing body of work shows that not only do people dislike living around drab structures, but the cookie-cutter designs could be making us feel depressed — and worse.

Our body responds negatively to boring facades. In 2011, neuroscientist and design consultant Colin Ellard conducted a test to find out what happens to our bodies when we interact with monotonous landscapes, according to Science of Us. He led a group of people on a tour of Manhattan's Lower East Side, stopping at set points to check in with his participants and ask them questions. Ellard also had participants wear sensors that measured skin conductance, so he could track their level of excitement over the course of the walk.

He found that his group was most turned off after passing a Whole Foods, which they described as "bland, monotonous and passionless," according to Science of Us. On the other hand, areas with small shops and bustling restaurants elicited excitement.

Passing a Whole Foods once in a while isn't a problem in and of itself — the issue arises when dull structures are all you see in your day-to-day life.

We crave visual complexity, says Tufts University associate professor Justin Hollander and architect Ann Sussman in an article for the Boston Globe. The two detailed what happens when we don't get the optical diversity we desire. (Hint: It's not good.)

"Not only do dull streetscapes fail to attract, some research suggests the lack of visual variety leads to boredom and psychological distress — and even higher mortality rates," they wrote. "Cortisol, 'the stress hormone,' which has been linked to increased rates of heart disease, depression and lower life expectancy, has been found to increase after boring experiences." Yikes.

Sad surroundings may be giving us ADHD? Not only do bland facades stress us out, they also might lead to Attention Deficit/Hyperactivity Disorder symptoms, a condition that causes people to become easily distracted and restless and to exhibit impulsive or hyperactive behavior, according to psychiatrist and ADHD expert Edward Hallowell. Though often passed down genetically, ADHD can arise from other circumstances.

In an interview with Science of Us, Hallowell says that a mundane environment or intense boredom can sometimes lead people to develop characteristics of an attention disorder.

While there seems to be a wealth of negative factors effects tied to living in cities composed of dreary textureless buildings, it turns out living among stunning architecture can be really good for us.

It's good to feel awe. One past study, led by Stanford University Ph.D. candidate Melanie Rudd, shows that experiencing awe can make us feel better and act nicer.

When architecture is designed well, it give us that inspiring feeling. Structures like the Eiffel Tower or the Sydney Opera House draw visitors every year for their beauty. The study concluded, "Experiences of awe bring people into the present moment, which underlies awe's capacity to adjust time perception, influence decisions and make life feel more satisfying than it would otherwise."

All this is to say, maybe it's time to switch up your morning commute.