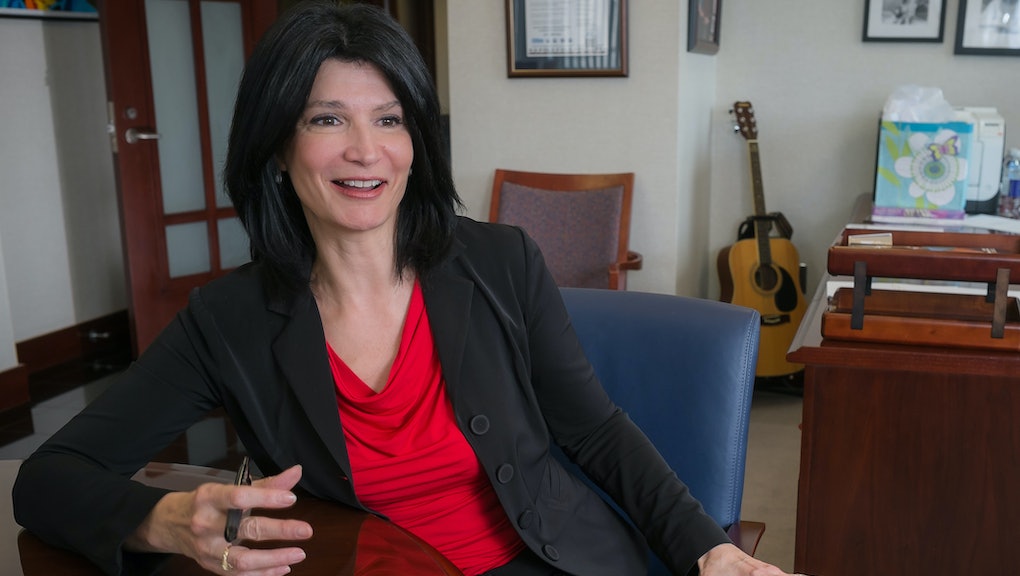 Head of the Nation's Largest Teachers' Union: "The Future of Everything" Hinges on 2016

With the national debate over education as contentious as ever, Lily Eskelsen Garcia, president of the National Education Association, the largest labor union in the country, is poised to play a major role in that raging debate.

During an interview with Mic, Eskelsen Garcia — the first Latina to lead the NEA — spoke passionately about how education affects the life of the nation in terms of the economy and social justice — and who she thinks would do the best job.

(The questions and responses in this transcript have been edited for brevity and clarity.)

Mic: I understand you're supporting Hillary Clinton for president. Why?

Lily Eskelsen Garcia: What impressed us with Hillary Clinton was her lifelong commitment to children and education as a social justice issue. It's amazing just to look at this race, because you look at the Republican side and who's left standing, and for us it's really quite frightening, because [of] the whole blame game of "If there's anything wrong with the world, it's because of teachers, it's because of public education." You don't like the weather, you know, blame your third-grade teacher for it.

So they have these very unsophisticated lines that they'll throw out, and we know part of that obviously is to detract from the agenda that we have. And the agenda that we have is to support elected officials — local school board members, your governor, your senators and the president of the United States. Everyone has a little bit of something to do with what's going to happen for that student. Whether that's whether they have access to preschool or access to higher education.

So for us — and because you mentioned the social justice aspect of education — we've hit a horrible milestone: Last year, for the first time in the history of this country, the majority, 51% of American public school students, qualified for free or reduced lunch, which means they come from financially struggling families. It could look on the outside like a perfectly nice middle-class family whose mom lost her job or whose dad is working two jobs at minimum wage, who haven't had a raise for five or six years, and so they can't keep up with putting gas in the car. They might still have a car, but they can't put gas in it.

What happens in that school is the ultimate community social justice cause, and we take politics very seriously, because politicians have so much to say about what we'll be able to do for our students."

Ted Cruz's wife, Heidi, has said one of her top issues would be school choice if she became first lady. That means vouchers?

LEG: You have such a divide: Here's the interesting part. You know, on the Republican side, it's all about privatize, standardize, de-professionalize. How do we get cheaper teachers in there and then get them out before you have to pay them too much. In the marketplace, [regarding vouchers], wealthier families will subsidize that and other families will not be able to do that. So the whole agenda over there to us is anti-child.

We have two good friends running on the Democratic side. Both of them were supported in their Senate races by the states they come from, so we always want to start by saying that there's not a good guy and a bad guy. So many people want to turn that into the same slugfest that they've seen on the Republican side. That's not necessary. You have two good people. It's about a choice, and you don't have to have saints and devils to make that choice.

When we looked at these candidates, Hillary pops out as the candidate for children, as the candidate for public education. I will never forget in the '90s, sitting back in Utah and looking at first lady Hillary Clinton sitting in front of the Senate committee on national health care and I just remember thinking, "Who does that?" I had been involved in politics all my life, just as an activist. I looked at that, and I went, "First ladies take on important, non-controversial issues: Eat your vegetables. Just say no to drugs. Read more." [Clinton] took on the pharmaceutical industry; she took on the for-profit health care industry, and I remember going, "What first lady has ever done that?" And the answer is none of them.

I have been watching Hillary Clinton as an educator and as a political activist all my life, and so as she became Sen. Clinton and then Secretary Clinton and broadened the experience that she has, I don't know if there's ever been a more highly prepared, highly qualified candidate. And the fact that she's a woman, to me, is a very powerful thing in the same way that Barack Obama was very powerful in saying our county is growing into that social justice world where you're not disqualified because of your race, because of your gender.

Millennial women may not feel the same urgency about electing a female president as their peers did eight years ago. And many millennials support Bernie Sanders. What does that say to you?

LEG: Here's what it says to me: It says people are actually looking at the candidates and not the categories that they fall into, and that's not a bad thing. It's OK for young women to say, "I support Bernie Sanders." It's OK for young men to say, "I support Hillary Clinton." What I am seeing here really is an important milestone. I don't know one person that said, "I'm for Hillary because I'm for any woman."

How do these public education issues affect people who, say, are out of school themselves and don't have kids in the system? What do you see as their stake?

This incredible web of interest for whatever reason will actually work, I think, in the benefit of the candidate who will be able to best articulate, "Here's why this is not a children's issue. Here's why this is a human issue, why it's an economic issue, why it's the future of everything." And I think Hillary Clinton has lived that. As a young lawyer, before she had Chelsea, she was working with the Children's Defense Fund, and what was she specifically working on? Special education, the rights of special ed kids to have the appropriate services. [On health insurance], we saw where she put her activist heart, and it was in children and families.

Our readers may make the biggest investment of their lives in their educations, and that involves questions about accessibility, affordability, debt. Does Hillary Clinton stand out on addressing any of those things?

LEG: What happened as I was speaking with Hillary Clinton and asking her positions on different things — and being very happy with the answers about investing in education, investing from preschool to graduate school — something happened in that conversation that stuck with me. She started asking me questions.

[She didn't pretend] that "OK, so I'm the candidate so I have all the answers" — and I think an awful lot of people expect that. But I think if you're a really smart human being, you would say, "Gosh, I see that education means a lot. I see that there are issues and problems in education. Maybe I should ask a teacher what their ideas are before I form my ideas."

She kept saying, "I'd love to talk to a group of educators who work in the poorest of the poor school districts — what it's like, what they feel the federal government should be doing."

[I like] the fact that she would actually have that very smart but humble heart to say, "I don't know everything. You're the expert. I might not agree with you on everything, but I at least need to know what's in your head so that I can formulating the kinds of ideas and policies that will actually work."

What if Clinton or Sanders doesn't win?

LEG: For me, there's so much at stake in this. It really is the future of everything, that we get someone who really cares about families, has that smart, humble heart that says, "Not only do I have ideas, I'm listening to your ideas too." That's Hillary Clinton.