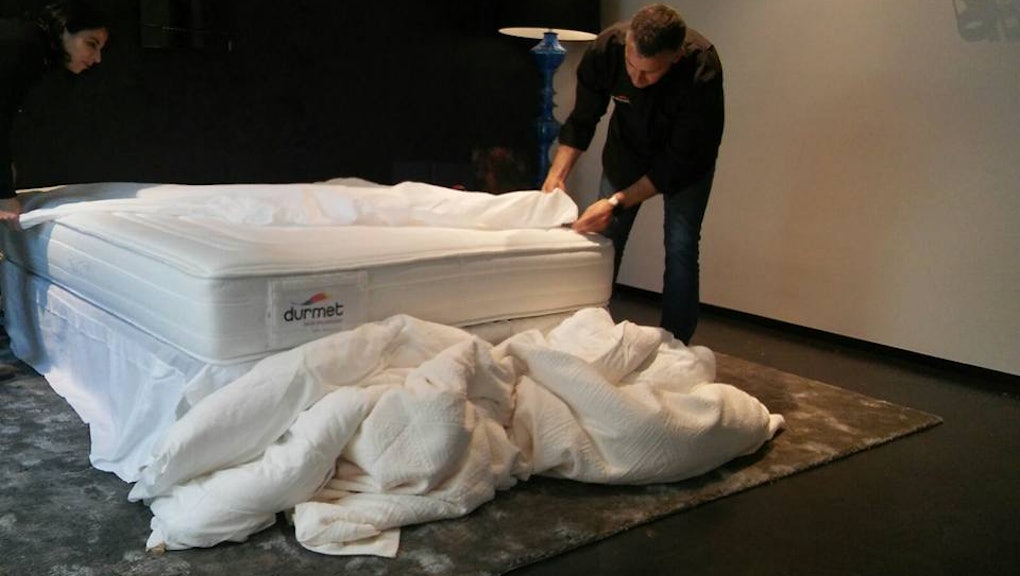 If You're Getting Cheated On, This Smart Mattress (or "Smarttress") Will Tell You

Throw away your teddycams, mistrustful lovers: There's a new smart mattress in town and it'll shoot you a text if your significant other is two-timing you.

The Durmet Smarttress is a mattress with a "Lover Detection System" — meaning it is equipped with sensors and will send an alert to your smartphone "whenever someone is using your bed in a questionable way." (Boning. They are insinuating boning.) It's unclear if or how the mattress knows who is romping around in your bed, but if you get a text alert and you're at the office, you can safely assume that it sure as hell isn't you. "If your partner isn't faithful, at least your mattress is," the company's website states.

It's not unusual to transform a "dumb" household object into something "smarter." We've seen lightbulbs, locks, air-conditioning units, televisions, refrigerators and even trash cans connected to the Internet of Things. And now we have a hanky-panky-monitoring mattress.

Smarttress costs a steep $1,750, Re/code reported, and despite your skepticism, it is not a hoax — the company "has been making sleep-related items since 2012" and  Durmet spokesperson Antonio Muiño told Re/code it is real.

Muiño said in a YouTube video that the latest studies on infidelity in Spain inspired the team to create the infidelity-detecting mattress.

Thanks to 24 ultrasonic sensors in the mattress, the Smarttress app can track the intensity and impacts per minute of the mattress movement, according to a YouTube video.

The mattress can pinpoint a spike in intense movements, but it can't definitively confirm that these movements are attributed to sexy time. If your SO has a secret hobby of jumping on the bed while you're out, it'll likely pick up that movement and send it to your phone. Also, it's TBD if a slow-and-steamy sesh with little to no movement other than a gentle gyration would be picked up by the bed sensors. So it's not a flawless system.

But if bae's unfaithful rendezvous are anything like a Shaggy song, you're going to need a smart counter, sofa and shower to catch 'em in the act.